Bobby Douglass and His 1972 Run for a Record 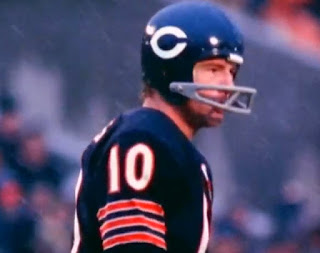 In 1972, many NFL teams were experiencing more success than ever before by running the football.  The cause was primarily because the hash marks were moved closer to the middle of the field, which gave running backs more room with which to find holes and escape defenders. It also gave quarterbacks more room to head downfield with the pigskin tucked under their arm.

No quarterback throughout the entire decade of the 1970s experienced more success in running with the football than Bobby Douglass did in 1972. The Chicago Bears signal-caller broke out of his passing pocket a total of 141 times for a record 968 yards rushing, a 6.9 yards per rush average that was tops in the league.  The Bears finished in last place in the NFC Central Division in 1972 with a 4-9-1 record, but the blame could not be attributed to Douglass, at least as far as his running abilities were concerned.  Douglass led his team in rushing that year.

Douglass brought a physical bearing to the quarterback position. He stood 6-foot-3 and weighed 225 pounds.  It was not uncommon to see him break many tackles en route to gaining ground yardage, and one could often observe defensive opponents—many of whom were of the same size as Douglass – bounce off of him as he surged downfield. Some people proclaimed him to be nothing more than a misplaced fullback, but he certainly brought more to the team than just his running capacity.

He possessed one of the strongest throwing arms in the league. Critics derided his passing attempts as void of accuracy, but few men in the league could throw the deep pass better than Douglass.  Moreover, Douglass also served as the Bears holder on field goal attempts and point-after-touchdown conversion attempts. Several times in 1972, a center snap back to Douglass would go awry, and when that happened, Douglass would provide an ad-lib scramble to aid the team.

Right from the very first game, Douglass was a quarterback on the run. The Bears were trounced by the visiting Atlanta Falcons, 37-21, but Douglass made his presence felt with 68 rushing yards on nine carries (a 7.6-yard average). The Bears actually outrushed the Falcons, but Atlanta’s 31-7 halftime lead proved to be too much for Chicago to overcome. Douglass did even better against a supposedly tougher defense the following week, as he ran for 82 yards on seven carries (an 11.7-yard average per rush) against the Los Angeles Rams. 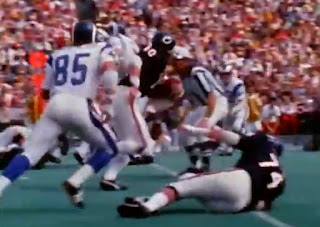 Unfortunately for Douglass, one of his two interceptions on this afternoon was returned 24 yards for a touchdown by Rams defensive back Gene Howard, which kept the Bears from doing anything more than posting a 13-13 tie. The third game resulted in another Chicago loss, as they lost to the rival Detroit Lions, 38-24. Douglass ran for 97 yards on 12 carries (an 8.1-yard rushing average per carry) and one touchdown. But he also threw two more interceptions, as the Bears started to fall out of competition in the tough NFC Central Division. Despite this, the Chicago offensive game plan remained the same…and strategically basic.

“The coaching staff felt we had to establish a running game first,” recalled Douglass. “Don’t forget, you have to have a good running game to set up the passing game.”

Douglass took this edict from his coaches to heart. His passing plays and their results always took a back seat to his running efforts. Chicago head coach Abe Gibron was nevertheless satisfied that his quarterback was doing what his offense needed the most.

Because his receivers sometimes had difficulty snaring the missiles that Douglass threw, Gibron felt that it was best to give his quarterback a green light to run with the ball as a quick option, rather than taking a sack. As a result, Douglass often never searched in the pocket for more than one receiver before tucking the ball and running with it. His secondary target was often ignored. 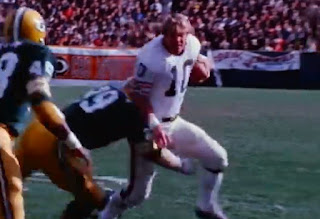 One thing that Gibron, Douglass, and the rest of the Bears could not ignore, however, was the losing.  Chicago’s fourth game was a 20-17 loss to the Green Bay Packers. The Bears outscored the Packers in the second half, but Green Bay’s defense held Douglass to his worst outing so far in 1972, at least in regard to his rushing output. Douglass was held to only 45 yards on 12 carries (a 3.8-yard average per rush). Despite this, Douglass was drawing praise from some opposing coaches.

“I’ve always said Douglass was a good quarterback, even before I became a pro coach,” admitted Green Bay head coach Dan Devine. There are football experts who say quarterbacks can’t run in the NFL. They should come out here and try coaching in a game like this.”

Chicago finally notched its first win of the 1972 season the following week, and they did it in grand fashion. The Bears shutout the Cleveland Browns, 17-0, a team that would eventually win the AFC Wild Card berth in a few months’ time. It was Douglass’ second-best rushing game of the year, and it was highlighted by his 41-yard touchdown pass to wide receiver Earl Thomas, and his 57-yard scoring sprint down the near sideline in the fourth quarter to ice the game. 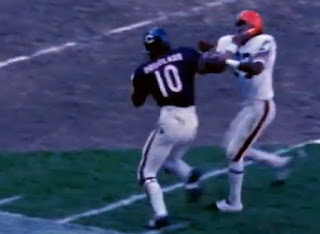 On that run, Douglass bootlegged around left end and showed off his speed. He was not confronted by any potential tacklers until he reached the Cleveland 15-yard line. At that point, he weaved inside of Clarence Scott’s feeble tackling attempt, and then stiff-armed Thom Darden at the 5-yard line to reach the end zone.  All tolled, Douglass accounted for 117 rushing yards against the Browns on 11 attempts (a 10.6-yard rushing average).

“Douglass is a strong runner who makes problems for the defense,” lamented Cleveland head coach Nick Skorich after the game. “He gets the flow going one way, and then goes another. They should have made him a halfback. He’s very quick. He looked damned fast on that bootleg.”

Douglass’ speed was slowed down quite a bit during the next handful of games, but he was able to engineer a big win over the rival Vikings on Monday Night Football in week six. Douglass ran for 66 tough yards on 11 carries (a 6-yard average) in a game that primarily featured Chicago’s running game. 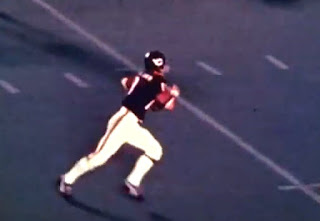 Douglass only threw the ball five times against the tough Minnesota defense, but thanks to running back Jim Harrison’s 103 ground yards, the Bears managed to pull out a 13-10 upset victory.  Chicago continued their momentum the following week with a 27-10 win at St. Louis. But it was a misleading game, for the Cardinals committed four turnovers, and Douglass could generate only 29 rushing yards.  But he was able to score a touchdown (his fourth of the 1972 season), and he also threw a 73-yard scoring bomb to wideout George Farmer. The Bears now owned a 3-3-1 record as they began the second half of their schedule.

“I run more than anyone else,” admitted Douglass in a 1973 interview. “But I do it because we thought it would help our running game. It does have its advantages. I’ll run around a while and either find someone downfield or gain some yards myself.”

Unfortunately for Chicago and despite Douglass’ running efforts, they ran off a string of five straight losses at this point, which effectively ended any hope that they might have had for contention in the NFC Central. Losses to the Detroit Lions (14-0 on November 5), Green Bay Packers (23-17 on November 12), San Francisco 49ers (34-21 on November 19), Cincinnati Bengals (13-3 on November 26), and the Minnesota Vikings (23-10 on December 3) were certainly tough for the Bears to swallow. But Bobby Douglass nevertheless managed to account for a total of 262 rushing yards during those five defeats. 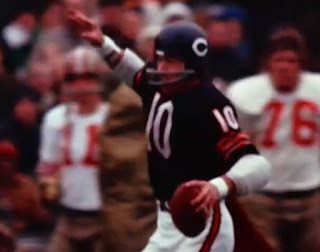 The second-to-last week of the season resulted in Chicago’s final win of the year, a 21-12 victory over the Philadelphia Eagles. It proved to be one of the most productive outings of the year for the Bears. Douglass ran for 75 yards and two touchdowns, both of which were meandering runs through the heart of the Eagles defense.

Chicago’s offense compiled 214 total rushing yards in the game.  The Bears completed their 1972 season at Oakland. Despite their 28-21 loss, Douglass ran for a season-high 127 yards on 14 carries (a 9.1-yard rushing average).

As a result, Douglass set a new NFL season rushing record for quarterbacks (in a 14-game regular season) of 968 yards rushing that stood for 34 years until it was broken in 2006 by Michael Vick of the Atlanta Falcons, who achieved his new record of 1,039 yards rushing in a 16-game season. Abe Gibron simply summed up his quarterback’s spectacular 1972 season the best by proudly stating that “He’s my quarterback.”