Bob Talamini, a three-time AFL champion with the Houston Oilers and New York Jets, passed away on May 31, 2022.  Like so many offensive linemen who toiled in the part of the field known as “the pit,” Talamini played his entire career in relative anonymity, especially when compared to some of his more illustrious teammates such as George Blanda, Billy Cannon, Don Maynard and Joe Namath.  But to close observers of the old American Football League, and especially teammates and opponents, Talamini was an outstanding player who enjoyed a highly successful nine-year career.

The Louisville, Kentucky, native earned third-team All-SEC honors while playing collegiate ball at the University of Kentucky, and that caught the eye of the Houston Oilers of the new American Football League, which was starting play in 1960.  By the end of his rookie season, Talamini was a fixture as the Oilers’ starting left guard.  In 1962, he earned his first of six straight trips to the AFL All-Star Game.  Talamini also won two league championships (1960 and 1961) playing alongside fellow All-Star Bob Schmidt (center) as they paved the way for the offensive fireworks of quarterback Blanda, halfback Cannon and wide receiver Charlie Hennigan.  Though the Oilers fortunes faded over the next several seasons, Talamini’s star shone brightly as he earned All-AFL honors in 1963, ‘65 and ’67.  The Oilers had a brief resurgence in ‘67, winning the AFL East, but lost to the Oakland Raiders in the championship game.  Talamini, tired of the Oilers’ lack of success, held out of camp in 1968.  This led the Oilers to trade the six-foot, one-inch, 255 pounder to the New York Jets for a draft choice.  It was the best thing that could have happened to the aging warrior. 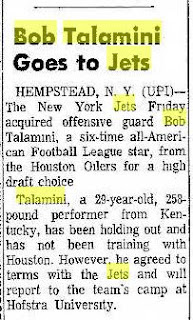 Talamini put together a solid season anchoring a very highly rated Jets offensive line and was rewarded with a trip to the Super Bowl in which the Jets pulled off a stunning upset of the NFL’s Baltimore Colts.  Shortly after taking part in the Jets’ unlikely run, Talamini decided to call it a career, announcing his retirement the following summer.  Not everyone gets to go out on top, but Bob Talamini certainly did! 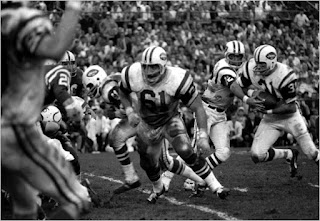 Talamini (61) provides interference for running
back Bill Mathis (31) against the Baltimore
Colts in Super Bowl III.

(Contrast Talamini’s career with that of fellow guard Pete Perreault, whose path was practically the inverse of Talamini's.  Perreault spent five seasons with the Jets but was left unprotected in the 1968 expansion draft.  The new Cincinnati Bengals selected him and denied him the opportunity to play in the very same Super Bowl.  Poor Pete returned to the Jets the following year, but the team never made it back to the big game.)

When this writer was working on the book Rockin’ The Rockpile: The Buffalo Bills of the American Football League, I had the opportunity to speak to Billy Shaw, another great guard who, like Talamini, spent his entire career in the AFL.  Both were named to the AFL’s All-Time Team selected by the Pro Football Hall of Fame in 1970.  Shaw, of course, went on to be enshrined in the Hall of Fame in 1999.  I asked Shaw if there were any players from those old days that he watched or studied, and he told me Talamini was the only one he would watch.  He cited Talamini’s footwork as outstanding.  That is quite a compliment when a Hall-of-Famer is studying your technique.

Talamini was enshrined in the Kentucky Pro Football Hall of Fame (yes, there is such a thing!) in 2011.