Today we take a look back at a very unique and important women in NFL history.

On Wednesday July 13, 2022, Rozene Supple passed away at her home at Smoke Tree Ranch in Palm Springs, California. She was 97 years old.

Supple was the daughter of George A. Richards the original owner of the Detroit Lions.

While doing research for my biography on Joe F. Carr, the former NFL President (1921-1939) I was fortunate to interview Supple. On December 4, 2009 I sat down with her at her home in Palm Springs to talk about her famous father and his purchasing the Portsmouth Spartans and moving the franchise to the Motor City.

The 85-year old Supple spent nearly two hours chatting about her father. I learned more than I ever could about the man who not only owned the Lions but created a legacy that is still felt in Detroit, especially with his creation of the Lions Thanksgiving Day game tradition. During that visit you could feel the pride and love she had for her father.

George Arthur Richards was born on (March 19, 1888) in Crete, Illinois to his parents, James W. and Stella Richards. The son of an insurance agent, young George lost his father at a young age and would be raised by his single mother. She would be a single mom to seven children- Ralph, Helen, Horace, Clarinda, Florence, George, and Stella. Eventually she would work as a trained nurse to help support her family.

Richards began his working career at a very early age, first becoming a shoe salesman working on commission. Then he would bounce around working in Columbus, Ohio and then in Detroit as a special superintendent for a tire manufacturing company.

In 1911 he became a very successful salesman for a tire company, which gradually developed into him running his own automobile dealership. Richards eventually sold his auto franchise to General Motors for a reported $100,000 to go into the emerging radio industry. The flamboyant Richards invested in two 50,000-watts stations in Detroit (WJR radio) and Cleveland (WGAR). In 1937 he would add KMPC of Hollywood, California, and his empire would be called the Richards Stations. “He always loved football,” said Rozene Supple. “I think he really missed never having gone to college because he really got enthusiastic about Michigan and Michigan State. I think his dream was to have a football team. But radio was his real interest. That’s what paid the bills.”

In 1934 Richards was an established star in the radio industry, and WJR in Detroit was the city’s most popular station, nicknamed “the Good Will Station.” Richards was intrigued by the offer to own a franchise and felt honored that Carr would seek him out to invest. “My father was a rather small, five-feet-eight, but vocal man,” says Supple. “He always enjoyed sports, so it was a perfect fit for him.”

At the 1934 winter meeting NFL President Joe F. Carr sought out H. G. Salsinger, the esteemed sports editor of the Detroit News, who was covering the meetings. Carr knew that pro football had failed four times in Detroit before. The Heralds (1920); Tigers (1921); Panthers (1925–1926), led by Jimmy Conzelman; and Benny Friedman’s Wolverines (1928) all tried to capture the fancy of the Motor City but couldn’t. Even with that track record, Carr still considered it a prime location for an NFL team. It was the perfect spot for the struggling small-town Portsmouth Spartans.

Carr met with Salsinger, who was well respected in the city when it came to his knowledge of sports. His connections would be vital in finding an investor. Salsinger was receptive to the idea to help the league, so President Carr commissioned him an agent. Salsinger returned to Detroit and started to put together a committee of influential sportsmen, but they were still missing a key investor who would put up the money to buy the Spartans. While having lunch at the Detroit Athletic Club, Salsinger’s   group saw Leo Fitzpatrick, an executive at WJR radio in Detroit. The group thought Fitzpatrick’s boss was the perfect man to invest—he had money and was a big football buff. Fitzpatrick listened to the proposition, liked it, and promised to relay the information to his boss - G. A. Richards.

Richards was a fan of the NFL and had the financial means to support a franchise. It was a perfect combination. Carr then arranged for Richards to meet with Spartans executive Harry Snyder in Detroit to discuss the compensation for transfer. “It did not take much persuasion for me to enter the pro game,” Richards said in October of 1934. At this time, Richards was forty-five years old and a millionaire.

On March 23, one day after returning from Detroit, Snyder traveled to Columbus, Ohio, to confer with Carr on the negotiations relative to the transfer of the Spartans to Detroit. In his office Carr heard the terms in detail and announced that the agreement would be completed in ten days, because the Spartans shareholders had to officially sign off on the deal. On April 5 the stockholders met in the Shelby auditorium and agreed to sell. Richards and his syndicate agreed to purchase the Spartans for $15,000, which included the contracts of head coach Potsy Clark and all the players. He also agreed to pay off the remaining $6,500 (Lions media guide says $7,952.08) debt of the Portsmouth owners. Richards not only had an NFL franchise, he had an experienced, well-stocked, well-coached team.

Richards announced that the franchise’s front office would include William Alfs, a local Detroit attorney, as vice president; Cy Huston, who operated billiard halls and bowling centers in Ann Arbor and Detroit, as general manager; and P. M. Thomas, an executive at WJR radio, as secretary-treasurer. He then revealed that the team would play its home games at University of Detroit stadium (capacity 25,000). It was also announced that the new franchise would drop the Spartans nickname. Just like George Halas did in Chicago, Richards honored the city’s baseball team, the Tigers, by choosing the ball team’s more ferocious counterpart and named the squad the Detroit Lions. A team spokesperson would say, “The lion is monarch of the jungle and we hope to be the monarch of the league.”

Young Rozene grew up going to Lions games. Sometimes she would sit on the bench to watch the action. One photo that made the Detroit newspapers shows her sitting next to the children of coach Potsy Clark wearing a football helmet and sideline jacket. Rozene would witness the Lions early history in Detroit. She saw the rivalry against the Chicago Bears.

“He always admired George Halas, but the Bears were notoriously dirty men,” said Supple. “They didn’t have referees calling everything. They had a tackle named George Musso. Well Musso used to put aluminum bands on his wrists and tape them up. Bang! Teeth all over the place. One time Ace Gutowsky, our fullback, took the ball on a kickoff. I was sitting on the bench. He didn’t’ care where he went except for Musso. He put his head down, they used to call him the human battering ram. He put his head down and hit Musso right in the stomach. Knocked him out. It took about six guys to carry him off.”

In 1935, their second season in Detroit, the Lions defeated the New York Giants, 26-7, to win the NFL championship. “Oh he was just full of himself. He just thought that was the greatest,” recalled Supple. Because of that championship the city of Detroit was now a football town. The failures of the past were now in the rear view mirror. 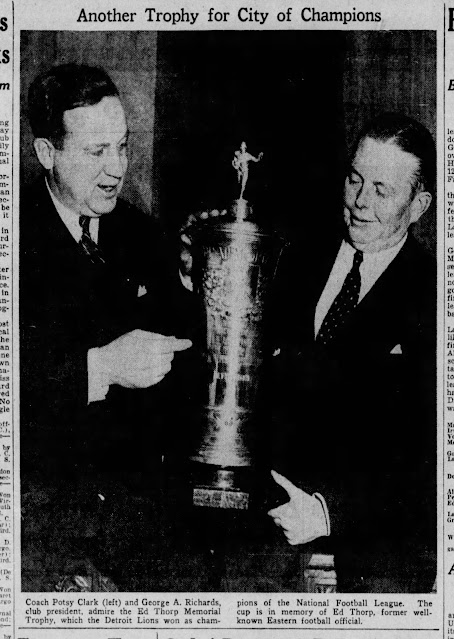 Supple cherished her relationship with some of the Lions players. She kept a small blue autograph book with signatures of all the players. Even after seventy years she has kept the autograph book, showing me the signatures. “Oh, I loved them all and some of their wives were neat too,” recalled Supple.

In 1940 George Richards was forced to sell the team due to health issues. He permanently resided in California, where Rozene would spend the rest of her life.

Over the past few decades Supple and her husband Ric supported the arts in Palm Springs. They owned several radio stations and became heavily involved in operated the Camelot Theatre – which became the center of the Palm Springs Cultural Center.

During my time interviewing Rozene Supple I learned much about her father and the early days of the NFL. It was a trip that I’ll always remember.