LOOKING BACK
by Jeffrey Miller

Sports memorabilia collecting is huge, with just about every major professional and college sports team having its own cache of collectibles that includes figurines, pennants, game-worn items, trading cards, game programs, posters, and on and on. In my latest literary endeavor, I am partnering with Buffalo Bills uber collector Greg Tranter to chronicle several of the items in his massive collection, which includes some 300,000 pieces of 3D items and ephemera. Though we have not yet decided on a title for the book, we have signed a contract with St. Johann Press to publish the work in the fall of 2020.

I have chosen to highlight a few of the items that we are including with stories here in the Journal. A few weeks ago I highlighted the 1971 Chein Wastebasket, but will dedicate this edition to something more familiar to the casual fan … 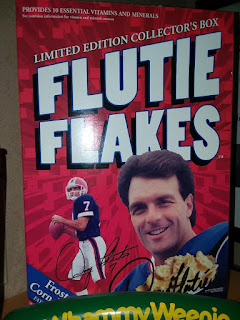 A box of Flutie Flakes,
signed by the man himself!


Perhaps the most recognizable of all Buffalo Bills collectibles is Flutie Flakes, a breakfast cereal inspired by Bills quarterback Doug Flutie. Flutie Flakes hit the market in October 1998 as Flutie was gaining significant popularity for his feats of derring-do and uncanny knack for eluding pass rushers and scrambling for first downs with his fiery leadership style. By sheer force of will, and--some believed--a little magic, the five-foot, ten-inch signal-caller was able to overcome the perceived height disadvantage and befuddle defenses stacked against him. In his first year with the team, Flutie earned Pro Bowl honors by completing 264 of 354 passes for 2,711 yards and 20 touchdowns, and guiding the Bills to the playoffs.

It wasn’t long before Flutie was approached by PLB Sports, Inc., a Pittsburgh-based sports marketing firm, with the idea of creating the cereal with a large portion of the profits to be donated to the Doug Flutie, Jr. Foundation for Autism, a charitable organization created in honor of Flutie's autistic son. The foundation's goal is to promote awareness and support families affected by autism spectrum disorders.

Flutie Flakes landed on the shelves of local shopping centers in the fall of 1998 with an initial production run of 50,000 units. The cereal proved wildly successful, however, and by that December sold its one-millionth box. Even after Flutie was unceremoniously benched in favor of Rob Johnson—a move that created a raging quarterback controversy among fans and pundits—sales of Flutie Flakes continued to soar. The popularity of the cereal inspired the Flutie Flakes Chocolate Bar, which featured crumbled Flutie Flakes smothered in pure milk chocolate, and Flutie Fruities, a “healthier” gummy fruit snack.

So popular were Flutie Flakes that they eventually attained cult-like status. Boxes of the cereal began popping up on various television shows, starting with The Tonight Show with Jay Leno. Flutie appeared on the program shortly after departing the Bills for the San Diego Chargers. A deluge of Flutie Flakes was dumped on the host’s head. A box of Flutie Flakes sat atop the refrigerator in Ray and Debra Barone’s kitchen for several seasons of the sitcom Everybody Loves Raymond.

The cereal was a favorite of character Jack McPhee on the drama series Dawson’s Creek. Boxes also showed up in the opening scene of a Friends episode, and on a bookshelf in an episode of the HBO comedy series Silicon Valley. In 2005, Flutie Flakes somehow found their way into an episode of Everybody Hates Chris, despite the fact the show is set in 1982, some 16 years before the cereal was conceived.