Something We Didn't Know About Stats, LLC.—They Changed The Definition Of "Stuffs" in 2021

By John Turney
We missed this one. From 1993 to 2020 Stats, LLC (STATS), in our view, wisely began to track a defensive stat called "stuffs". It was composed of tackles for a loss on running plays and counted them in a similar fashion as sacks. So, at the end of a game, season, or career one could total the sacks and the stuffs to get a number of plays behind the line of scrimmage. (Yes, with the caveat than a few sacks are for zero yards).
But of course, it is skewed like all stats are skewed in football. A run stuff is a play by a player and he gets help doing it, just like a sack.  Just like when a quarterback throws a touchdown, the line blocks, the QB throws it and a receiver catches it. If it is a pass behind the line of scrimmage and the receiver goes 80 yards, the quarterback gets credit for all the yards. Or if a running back runs 60 yards to the one, then a receiver catches a one-yard touchdown, it's all the receiver's stat for a touchdown pass.
So, our issue with STATS is that they have always excluded pass plays for a loss in their stuff stat. So, if a receiver catches the ball behind the line of scrimmage and a cornerback comes up and tackles him for a loss that is not a "stuff" according to STATS.
Nick Webster of PFJ fixed that. Maybe 20 or so years ago he began tracking "pass stuffs". Tackles for a loss on pass plays and added them to run stffs to get a total of plays behind the line of scrimmage and when added to sacks it gives a fuller accounting of what was happening. Suddenly guys like Ronde Barber and Antione Winfield were in the mix for league leaders. it was simply a cleaner, more fair way to account for stuffs or tackles for loss, whatever you want to call them.
Well, this year, STATS is including tackles for no gain in their stuff total. And that's fine. Since a tackle for no gain can in no way hurt and defense it is good to track them. But the problem is they just put them in the same column as previous years when the definition was different.
Case in point, during a discussion on Twitter it was pointed out that Aaron Donald (who we will use as an example throughout this post) had 15 stuffs. We knew he had 10. But we were counting plays for losses, not including for no gain. So, when we saw Donald's career defensive stats, sure enough, 2021 has 15. 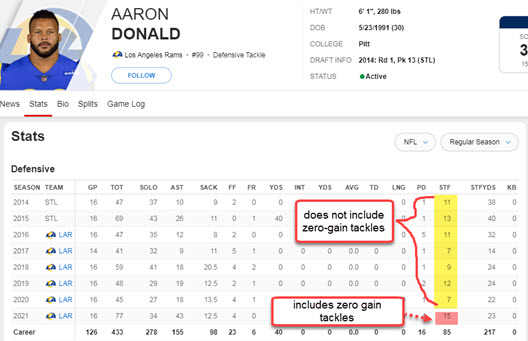 The problem is STATS did not go back to update previous years so 2014-2020 are one thing and 2021 stuffs are a different thing. It is not an apples-to-apples comparison.
We check the game by game and sure enough, the culprit was the zero-gains— 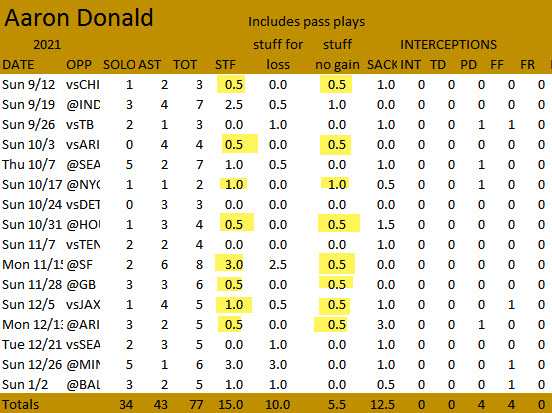 Note that the above chart is PFJ's stuffs which includes a few plays where Donald blew up a pass play for a loss.
So, we do not criticize STATS for including zero-gain tackles. It's just that you cannot put them in the same column as previous years because there are quite a lot of zero-gains in the NFL and it skews the total. Just keep it straight, or backdate the old stuffs with the tackles for no gain.
Now, since this information came from the ESPN website for player stats there is a possibility that STATS didn't change the definition, maybe they are now using ESPN Stats & Information as their new source for statistics and it is they who have the different definition of a stuff.  So we will keep that in mind if we can find out more information we will post it.
Here is our count of run/pass stuffs for Donald— 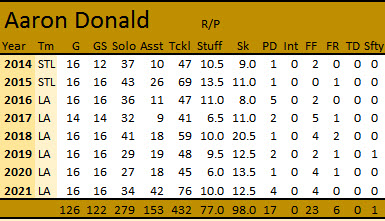 Now, if we added zero-gain tackles to make it an apples-to-apples comparison his career chart would look like this— 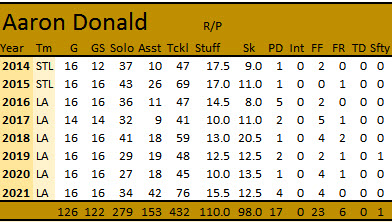 His career total for the new definition stuffs would be 110.0 rather than 77.0. So, it makes a difference in the great players, and this obviously applies to all players because tackles for no gain change the meaning of the stat and the totals for almost all players.
So, message to STATS, sure, add the zero-gains but backdate your data so as not to confuse less-than-knowledgeable fans and writers.
Message to fans and writers—double-check before you posts or Tweet that Donald has a career-high in stuffs. As of now, he doesn't. If he gets 2.5 more he will.
Posted by John Turney at 3:56 PM