Today PFJ looks back at one of the more unique stories of one of the NFL’s best two-way players who had a better career in another sport. With this being Kentucky Derby weekend we take a look back at the career of Ralph Kercheval.

Kercheval was born on December 1, 1911, in Salt Lick, Kentucky (Bath Co.), a town about fifty miles east of Lexington. All of his life Kercheval never strayed too far from his bluegrass roots. He had a passion for sports and horses. He would make one passion help the other achieve his life’s work.

In 2001 (July 12th) I was fortunate enough to interview Kercheval at his home in Lexington. He talked about growing up playing football, especially his special skill of kicking. “I must have kicked the ball a million times as a kid,” recalled Kercheval. “I practiced in all my spare time. Sometimes we’d play football all day. I did more kicking when I was between the ages of 10 and 15 than any other time.”

After making a name for himself on the gridiron in high school, Kercheval went to play football at the University of Kentucky. In Lexington Kercheval was a triple threat star, gaining a reputation of being one of the best kickers/punters in the country. It was also there that he met a Wildcat legend in John “Shipwreck” Kelly. The two would reunite in the NFL.

After playing one year with the New York Giants, “Shipwreck” Kelly joined the Brooklyn Dodgers in 1933. The following year Kelly reached out to Kercheval to see if he was interested in playing pro football. This was before the NFL Draft was founded, so Kelly had the inside track to sign Kercheval. The fellow Kentucky star agreed to come to Brooklyn and play for the Dodgers.

He made only one First-team All-Pro selection and that was by the Boston Post in 1935. He was named Second-team All-Pro in 1935 by Green Bay Press-Gazette and New York Journal, and in 1936 by Collyers Eye. He was also named Honorable Mention by the NFL in 1935-1936.

In the end, Kercheval's NFL career was mostly known for his kicking prowess.

During his time in the NFL Kercheval gained a reputation as one of the league’s best kickers. He was just a notch below his contemporaries Ward Cuff (Giants), Jack Manders (Bears), and Glenn Presnell (Spartans-Lions). He converted 31 career FGs and 33 XPs, making 86% of his extra-point attempts….6 times he finished in Top 5 in FGs made, including leading the league in 1938 with five.

“I got Ralph Kercheval to come to Brooklyn. He was a halfback, but his real greatness was in kicking the football. He could punt, he could placekick. He was the best kicker ever to play the game. Hell, he could fart the football farther than these guys can kick it today,” said “Shipwreck” Kelly to author Richard Whittingham for his book What a Game They Played.

Kercheval seemed to thrive under pressure kicking, since he’d practiced so much growing up. “You’re not exactly fresh after playing both ways for 50 minutes,” recalled Kercheval. “One advantage I had over some punters was the fact pressure situation never bothered me. You see punters who are terrific in practice but experience trouble in games.”

One of the major moments in the career of Ralph Kercheval, although he might not have known it then, was playing in the first ever televised game in NFL history.

13,000 fans inside Ebbets Field took notice of some of the bulky TV cameras. Roughly 1,000 TV sets in New York City would’ve had the opportunity to tune into the game. Allen Walz, a former Golden Gloves champ and NYU football star, did the play-by-play that day for W2XBS.

“We were told about it,” said Kercheval. “Just said, ‘boys forget it. You are going to be on camera…we saw some people all before the game to set up in various places. At the end of the grandstand, where one of the field goals happened to be, they had a camera all set up. So we were aware of it.”

But playing in the NFL wasn’t Kercheval’s ultimate dream. He used the money he made playing pro football to finance his true passion- being a horse trainer. “After seven years that was enough for me, because football was primarily so I could be in the horse business,” said Kercheval. He bought a farm in Louisville and began training horses. Over the next four decades Kercheval trained horses including a stint at the famous Vanderbilt ranch. He would train several top racing horses but one stood out among the rest. 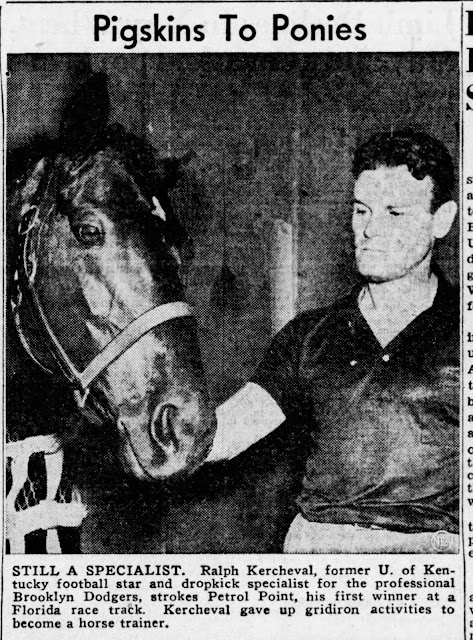 Kercheval would go on to train a once-in-a-lifetime horse. His name was Native Dancer. “He was such an outstanding horse,” recalled Kercheval. “I don’t think there’s ever been another horse quite like him. There’ve been an awful lot of wonderful horses but he was just an outstanding horse.”

Native Dancer ran in 22 races and won 21 of them. His only lost was in the 1953 Kentucky Derby in an upset. Native Dancer got so upset that he went out and won the Preakness and Belmont to narrowly miss out on the Triple Crown.

In 1954 the horse graced the cover of TIME magazine and made him even more popular with his races on television. The horse would go down as one of the greatest racehorses of all time.

During my visit with Ralph in 2001 his wife of fifty years, Blanche, joined us. She was very charming as she took care of her dear husband. They were a perfect match. After he got back to Jersey after the interview, Blanche sent me a sweet thank you note.

Although Kercheval was a decent NFL player during the two-way era he will be more know for his career with the ponies. During our interview, he reflected on his time in the NFL. “It was a lot of fun,” said Kercheval. “I wouldn’t have played if it hadn’t been fun. But I played pro football because I loved to play the game.”

As the Kentucky Derby goes off this Saturday, I'll choose to remember Ralph Kercheval and Native Dancer.