A Stat Line for All Time?

Looking - Just a Little Bit - Back
By Nick Webster 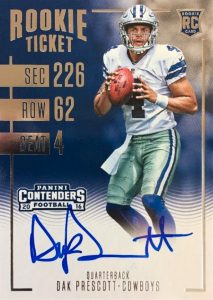 The Packers and Cowboys certainly gave us a treat last Sunday. But the last play of the game may have actually produced a stat line that may have never been seen before. A challenge to the readers, if you’ve seen this stat line before please, let us know. 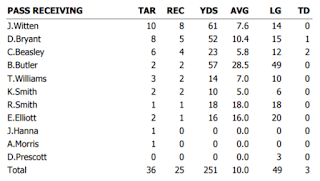 You’re looking at Dak Prescott’s receiving line from the game. You’ll recall the thrilling end included a play missing only the Stanford band marching out onto the field as the Cowboys lateralled the ball over and over in vain trying to pick up the miraculous last few yards to take the game. The play-by-play treated it like this:

Five laterals finally ended when Nick Perry, Linebacker of the Packers forced and recovered a fumble.

Now, this type of play isn’t terribly uncommon, but two aspects of it were. First, going back to the receiving chart, Prescott had 0 receptions for 0 yards and a 3-yard Long reception!  It’s not unusual to show up on a receiving chart with no receptions, this is the way the league treats any play where a receiver laterals the ball to another player, you are credited 0 receptions and whatever yardage you get following the lateral. We’d venture to say it’s even happened before that a player has had 0 receptions and 0 yards, as it seems reasonably possible that a player can get a lateral and fail to gain any yardage following the lateral.

But how do you get 0 receptions, 0 yards, and a 3-yard long reception? It requires that you have no direct receptions in the game, receive a lateral, gain yardage (in this case 3) and then receive another lateral – in this case on the same play, but it could be later in the same game – and lose precisely the yardage you gained following the initial lateral. This may be the first time that has ever happened, is it, if you have evidence of another occurrence, let us know.