Gamebooks and Team Press Releases—Can They Be Improved?

The image above is the top of what is now called an NFL Gamebook, though it is entitled a "Game Summary". It used to be called a Play-by-play. We, at Pro Football Journal, have gone through tens of thousands of them doing research trying to glean information from them that had previously been ignored or neglected. Things such as sacks, net punting yardage, forced fumbles, starting lineups, etc.

We will focus on the starting lineups in this post.

The stated purpose of the Gamebook or Game summary is for "assisting the media in their coverage of the game". And they do a tremendous job in doing that. But in recent seasons, with so many different offensive and defensive schemes the starting lineups sometimes can get skewed. And the same things happen with some team Press Releases to the media.

Then, the erroneous information gets picked up and posted by excellent websites like Pro Football Reference.com or Ourlads. Then someone who reports on the NFL will go to those sites and use that slightly off information in a story or a feature about a player. We'd prefer that the original sources like the Gamebooks and Media Releases get it right from the beginning.

We will use the Los Angeles Rams as an example.

However, the Gamebook has the starting positions of Walker and Brockers reversed. However, cutting some slack for the stats crew there was a late shift to the left (defense's left) before the snap, but if that was the reason it wouldn't explain the next few games. 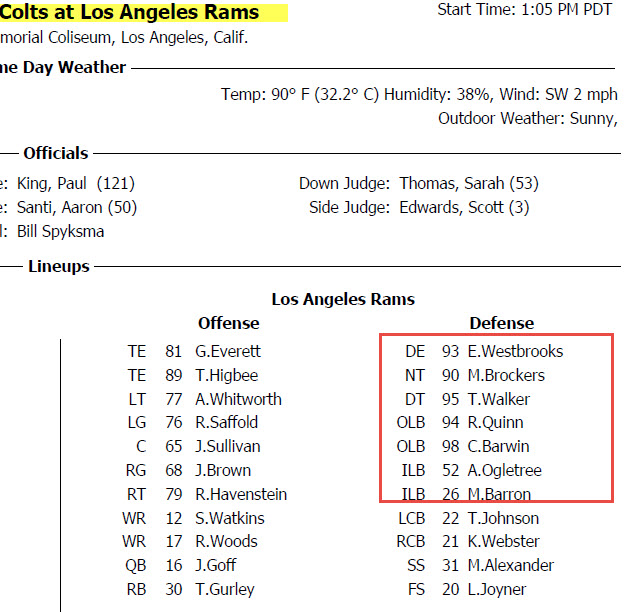 Here os the first snap of the Rams-Redskins games in Week 2. 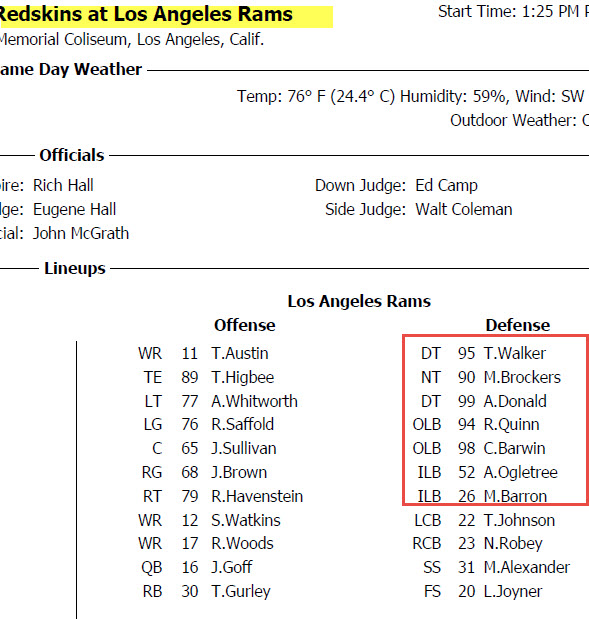 Week three versus the 49ers:

Here is the same questionable call as the Redskins game. Walker is head-up on a tackle, still making him a defensive end. It could also be debatable if Donald is an end on this play. He's usually aligned in a 3-technique, but here he's a bit wider, in a 4i-technique, which is the inside eye of a tackle. However, that is a matter of maybe a half-a-foot depending on the splits of the offensive line so keeping him listed as a defensive tackle is likely the right call. Walker, though, is technially and end. 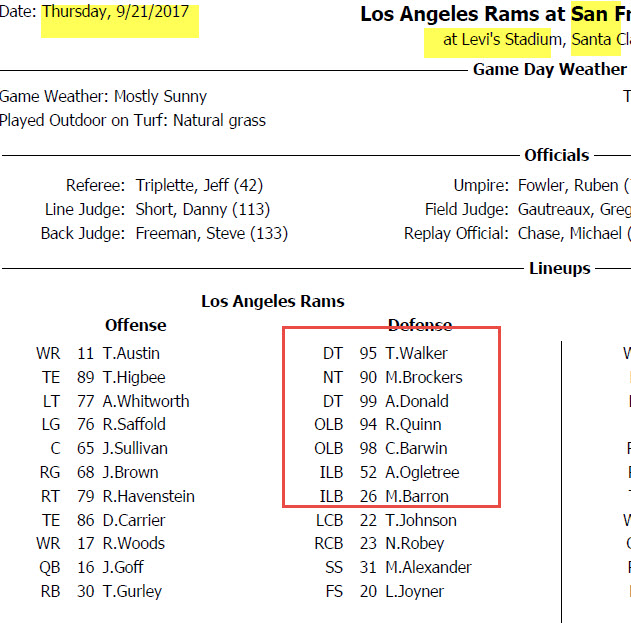 Next is the Dallas game in Arlington:
In this game it was publicized that Wade Phillips was going to move Michael Brockers around, and he did. He played almost all, if not all, likely run downs at 5-technique—defensive end. On the first snap he was lined up outside Tyron Smith. Rookie Tanzel Smart took Brockers's spot at nose tackle and Donald is at 3-technique over All-Pro Zack Martin.

But the Gamebook shows Smart at defensive tackle and Brockers at nose tackle. Both are in error. 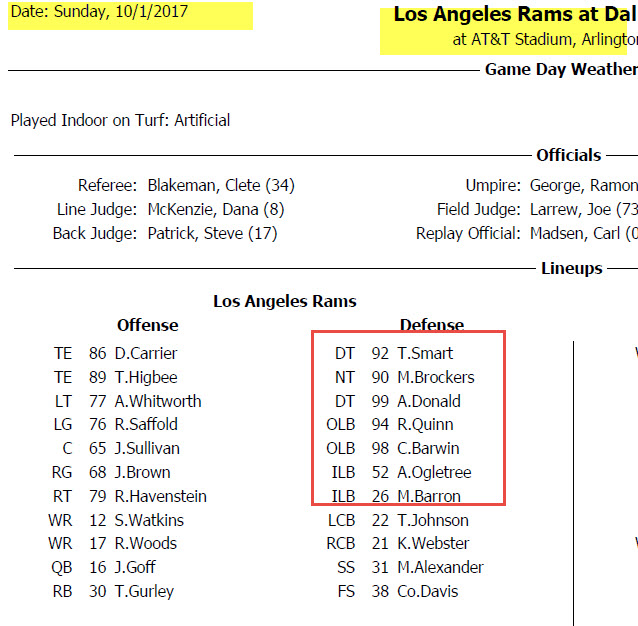 Finally, last Sunday's game versus the Seahawks.
This still gets a bit complicated. But if we are going to put this into a 3-4 scheme then Quinn and Alec Ogletree are the outside linebackers (our view is this is more of a 4-3 stack with Quinn as a stand-up defensive end) and Mark Barron and Cory Littleton would be the inside linebackers.

This is an even front (no nose tackle) and the tackles are Brockers and Donald with Barwin at defensive end in a 6-technique (head-up on tight end) and Quinn in a wide technique outside the tackle as a stand-up end.

It is fully understandable if the official scorer, in a short amount of time didn't get this quite right. But he or she lists Brockers as a nose, which he is clearly not and Ogletree as an ILBer even though he's in the hip pocket of Barwin on the second level. 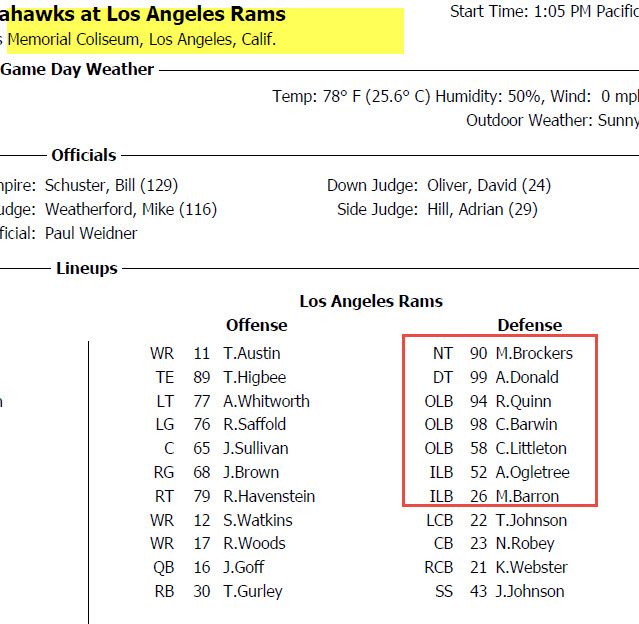 Adding to the confusion is the Los Angeles Rams Media relations staff and the press releases that go out every week.

Here is what they have listed in the current release which is for the upcoming Jacksonville game: 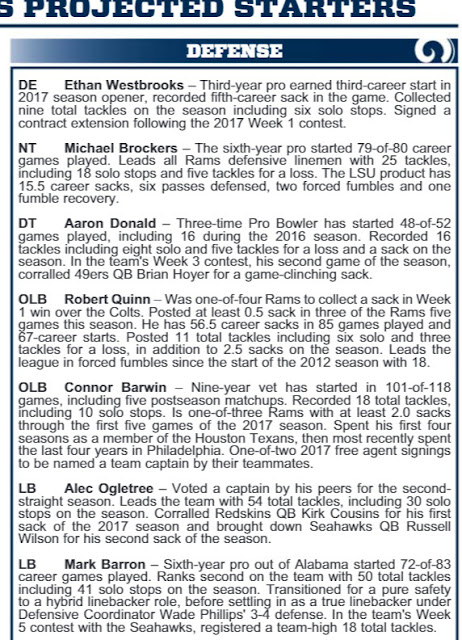 For some reason they still list Ethan Wesbrooks as a "projected starter" even though he has not started a game since Week One versus the Colts. They also list Brockers as a nose tackle even though he's been a defensive end, for the most part, the past two games. Tanzel Smart takes the lion's share of snaps at nose tackle. 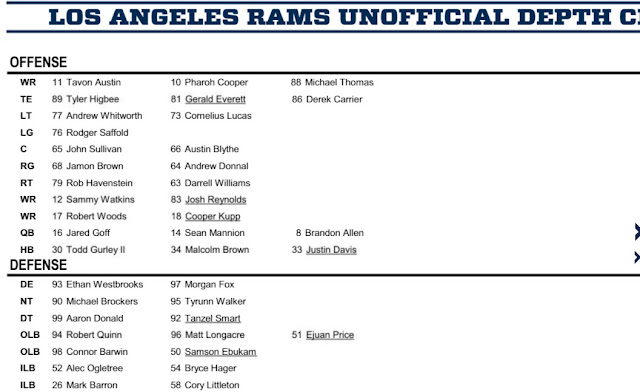 This is the current unofficial depth chart. Yes, it is unofficial but we are not sure that is an excuse for inaccurate. We just don't think this is accurate enough for a professional team's media relations department. The shop needs to be a bit better in our view.

This is not supposed to be unofficial, it is meant to help media with coverage of the games and to reflect who actually did start games. To be fair this is likely taken from the NFL Gamebooks, which we have pointed out can be off from time-to-to time.

For what it's worth, this is how we'd list the Rams front seven for the opening snaps of each game this season:

Why it matters? Mostly for historical purposes. This screen capture of the starters for the Rams at Pro Football Referece.com is accurate in the sense that it correctly records what the NFL Gamebooks list. But when someone in the future goes back and wants to study about or write about the players of 2017 they will make errors based on what is listed, the old GIGO theory (garbage in, garbage out).

Further, unless someone has video of the game it won't be correctable since Pro Football Reference uses a good system of using official documents (like Gamebooks) when making corrections. Ourlads tries to keep current depth charts for their website visitors. They have the new starting strong safety, John Johnson, listed but as per the Rams PR release still have Westbrooks as the starting defensive end, again, even though he started only this season's opener.

There are plenty more examples we've seen and really don't want to single out the Rams PR staff, though we have reviewed other teams and they seem to have the highest propensity for error but have not made an in-depth study of all 32 teams.

We just ask that the starting lineups be as correct as possible at the NFL Gamebook level and with the teams PR staff level. I wasn't until the last 20-35 years or so that the Gamebooks insisted on getting the starters right. Back in the day, the eleven starters in the base defense were listed and if a team opened with three- or 4-wide receivers they were not listed as starters. However, in this age of substitution, a decision apparently was made to get the starting elevens right, even if they were not going to play the majority of the game. And what happened is sometimes a nickel back would then get four or five starts, or a designated pass rusher would get three of four starts, not that he earned a spot on the base defense, but because the opposing team opened in three wides.

So, we simply suggest that all of us (and we don't exclude ourselves) up our game to get the best information recorded for future generations that way we won't have a 2040 equivalent of Merlin Olsen listed as a right defensive tackle at Pro Football Reference.com (a position he never played) for players that are active now. 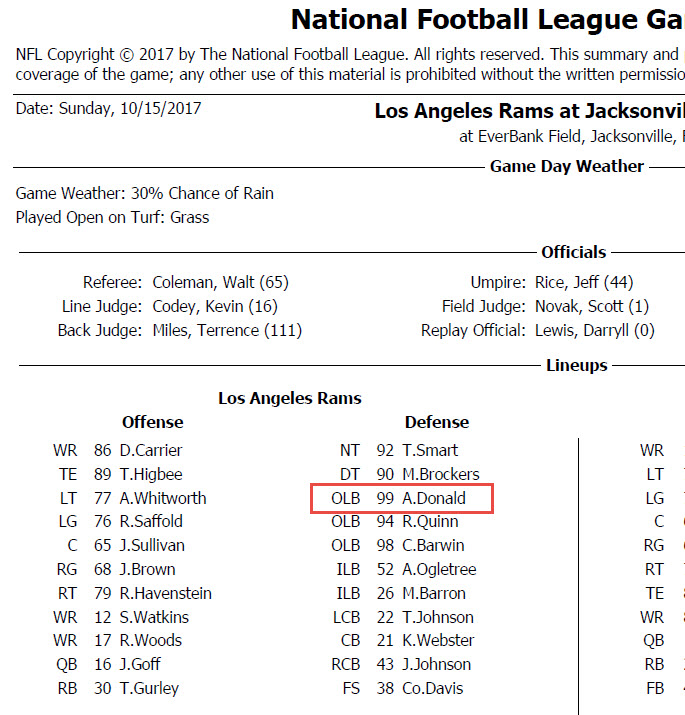 We have no idea why Donald is listed as an OLBer and only some idea of why Brockers is listed as a defensive tackle, though it isn't accurate.

They also listed John Johnson as a RCB when he was the deep/weak or free safety. 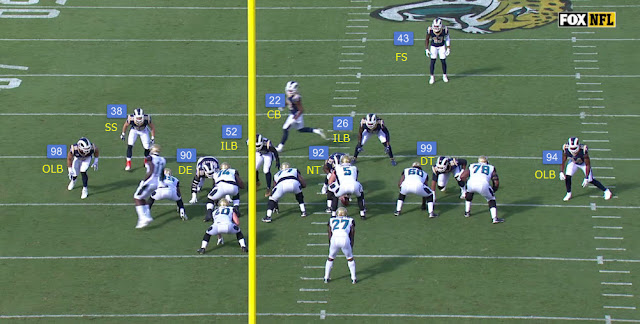 And due to these errors, places like Football Outsiders.com, a great site, also apes the poor information.

In their snap count section, due to the errant listing of Aaron Donald as an OLBer, his snap counts skew to unit totals for the defensive line and linebackers for the Rams. There table for week six, seen below shows five linebackers getting over 71% of the total snaps in the game. That is kind of hard to do when there were four linebackers the majority of the game. 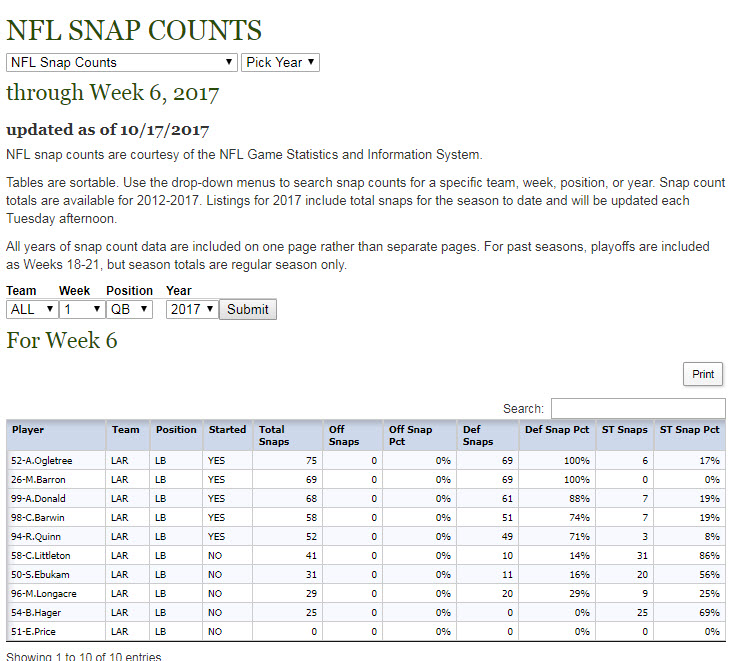 UPDATE II 10/23/17:
Fox Sports who got their info from Rams PR staff got the starting lineups wrong again as did the NFL Gamebook. The still shot is correct (labeled by Pro Football Journal) 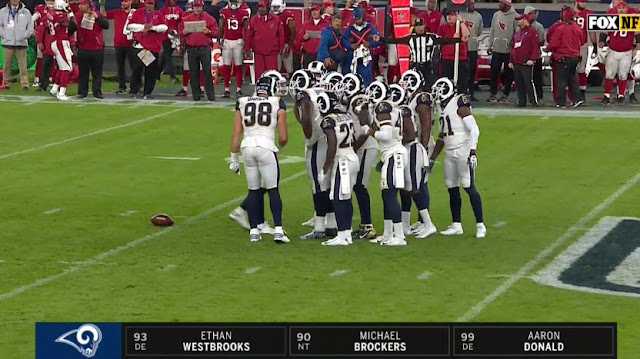 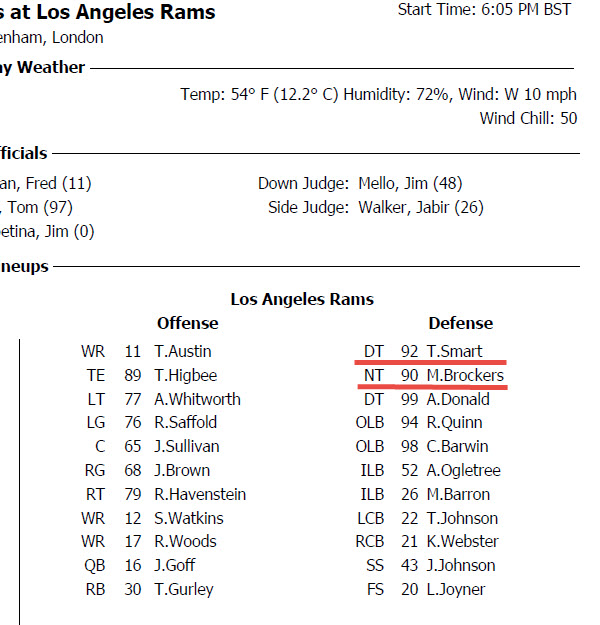