Will Lavonte David's Skills Land Him on the All-Decade Team?

By Nick Webster
Few players this past decade have been more consistently underrated than the Tampa Bay Bucs Lavonte David. The speeds Linebacker is excellent in coverage and can chase down plays in space and is, in essence, a poor mans Derrick Brooks. But alas, the Tampa D of the 2010s is not that of the early 2000s and his individual excellence has been largely ignored.

With one week left in the 2019 season, David again leads the NFL in stuffs (tackles of runners or receivers for a loss, using sack-like accounting). With 11.5 stuffs David is two clear of Aaron Donald and Jordan Hicks who trail at 9.5. The remainder of the top 10 (really the top 15 as many players are tied with 8) contains many of the top defenders in the NFL including Donald, Grady Jarrett who’s having a breakout season, the consistently excellent Demarcus Lawrence, contract year star Bud Dupree, and Joey Bosa. 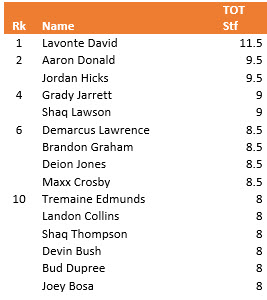 So perhaps David is a bit underrated this year as he’s received no mention for All-Pro and again was not even invited to the Pro Bowl. In his now eight-year career he has one All-Pro season and one Pro-Bowl season, in 2013 he was spectacular enough to get All-Pro treatment but so unknown that he made All-Pro without making a Pro Bowl. He then made the Pro Bowl but not All-Pro two years later in 2015.

Here are the leaders in stuffs per 16 games since David entered the league in 2012, you’ll note on the list 5 Defensive POY awards, and 6 if you count that PFWA gave Campbell the DPOY award in 2017.

More impressive perhaps may be David’s rankings, if he stays on top this season it will be his third time leading the league in stuffs. The only players as consistently at the top of the league are Aaron Donald and (accepting that injuries have impacted him) JJ Watt, these are the class of players David is in league with.

Here are the year by year leaders in stuffs going back to 1982. Three players have led the league twice and you’ve certainly heard of the first two, Mike Singletary and Ray Lewis, David is the third.  Only one player has led three times in the past 37 years, and that is HOFer Junior Seau. We think it’s time to start re-thinking David’s place among the NFL’s best linebackers.

Here are the stuffs leaders since 1982. Not that David is just finishing his eighth year and is averaging 12.3 stuffs a season, the best of anyone on the list.

And Finally, here are his career stats: