Splitting Hairs on Defensive Tackles for the 2010s All-Decade Team 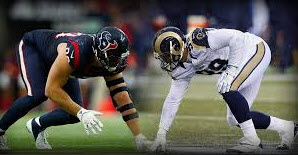 This month the Pro Football Hall of Fame Selection Committee will vote on the 2010s All-Decade team and the Hall of Fame will announce it sometime in April. We don't know he format of the team, this is to say if it will be the traditional team the Hall has chosen or if it will make changes similar to how the Associated Press has made changes to its All-Pro team in recent years (which has led to some oddities including players being voted All-Pro at two positions and many more getting votes at multiple positions and edge players being voted All-Pro ate linebackers and plenty of silliness.

One of those problem areas is defensive tackle. With the AP format players like JJ Watt and Calais Campbell can get votes at 'defensive interior' which often is their nickel position but not their base position. And almost always nose tackles get left out.

Rarely can you find two (and only two) at one position for a decade at a particular spot and here are all the interior line spots we think we have identified just two for each.

Regardless, this is our view as to how the field as to who are the top two players at the various positions that can be defined as 'defensive tackle'.

Sink End/30 End/Power End
We gave it away, these are the players who play 3-4 end in base and inside in nickel. Watt and Campbell are the top two. Cameron Heyward has had a nice decade but would have to rate third behind Watt and Campbell.

Watt began the decade playing inside in the nickel and later, maybe from the seonc half of 2014 he began to play more and more outside or 'edge' in the nickel anyway. In the last three years, with Jacksonville, Campbell was a 40 end in base and a defensive tackle in nickel so they were no pure 'sink ends' all the time anyway.

We'd consider the 30 End an end and match a 40 End with them anyway and then consider the rest tackles for the purposes of an All-Decade team.

These are the players that flop from side to side and almost always play outside should (or a bit wider on a guard). The top two are Aaron Donald and Geno Atkins. Third (honorable mention if you will) would be Gerald McCoy but like Heyward he doesn't quite rate with the top two.

Donald is already a Hall of Famer, an amazing combination of pass rush and run stopper in terms of penetration but can also hold the point. So much has been said it's almost just too redundant to add more. Atkins was so solid for soo long. After his knee injury wasn't quite the same but did complete his comeback and is super solid once again.

These are the classic NFL tackles who don't move side to side. They play both three-technique and shade (nose) when the line call asks them to do it. In the old days this was what players like Bob Lilly, Joe Greene, Merlin Olsen, and Alan Page did it this way. Bryant Young in the 1990s also did it this way (Warren Sapp was a three-technique).

In the 2010s  Fletcher Cox and Ndamukong Suh are #1 and #2 though you can argue which is which.

Cox was mostly a left tackle as well but would move around some (as did Suh) but he also played a few years as a sink end (30 end) playing tackle in nickel. Cox is technically perfect. He reminds us of Bob Lilly/Joe Greene combo or a Bryant Young-type, just solid in all areas. Smart, technical, strong, great hands, the complete package.

In 2018 the Rams tried Suh at nose tackle in base and often as a defensive end in nickel (mistake) and in 2019 the Bucs played Suh as a three tech (first time he 'flopped' career and it wasn't a bad idea) but the rest of his career he was a left tackle. No 40 tackle was more powerful than Suh, he was super stong, was effective on stunts. He had a couple flaws early in his career—could be sucker on traps and on run double-team blocks he seemed to take it personally and fought it and would get turned quite often. Still, at his best (2014-2015) he was the best in the game.

Kyle Williams of the Bills played some nose but was mostly 40 tackle is a solid honorable mention to these two but again like the other (Heyward and McCoy) he's not quite as 'blue' as the others.

Forgotten warriors. These guys stop the run in base defenses and leave the field in nickel. Damon Harrison was tops and Linval Joseph was second in our view. We put Haloti Ngata and Vince Wilfork on our 2005-2015 All-Decade team which is when their best football was played so there isn't a conflict with us, but the Hall of Fame voters could give a vote or two to a run plugger, but we doubt any of these will get enough support to even merit a Second-team slot.