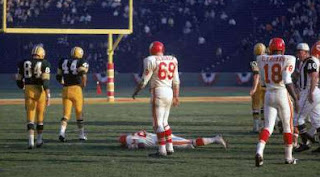 Fred Williamson had a fairly long and storied career in pro football before moving on to a successful career on the silver screen. After a somewhat lackluster rookie season with the NFL Pittsburgh Steelers in 1960, the Northwestern defensive back moved on to the Oakland Raiders of the American Football League.  There, he earned three consecutive trips to the AFL All-Star Game (1961, ’62 and ’63) and two All-AFL nods (1962 and ’63) and developed a reputation as a fierce hitter. His hard-hitting style earned him the nickname “Hammer,” which he played to the hilt.  In 1965, Williamson moved on to the Kansas City Chiefs, helping them earn a spot in the 1966 AFL Championship Game and the very first Super Bowl against the Green Bay Packers.

It was during those two successive post-season games that Williamson earned a very ignominious distinction.  Now, let me qualify my assertion by saying I don’t know if this is one-hundred-percent verifiable, but I find it highly unlikely that Williamson’s feat has ever occurred before or since. In back-to-back playoff games, Fred Williamson, the man who was reputed for lowering the hammer on opposing wide receivers, had the hammer lowered on him, setting a record for consecutive games being knocked unconscious.
Williamson’s first bout with on-field slumber came in the second quarter of the 1966 AFL Title Game against the Buffalo Bills. On a cold and dreary New Year’s Day (January 1, 1967), the Bills were in possession at their own 36-yard line. Quarterback Jack Kemp sent a short pass out in the right flat to fullback Wray Carlton, who then turned to head upfield.

Almost immediately, Williamson closed in to make the tackle but leading with his head, Williamson’s helmet collided with Carlton’s knee.

The Hammer’s body went limp and fell to the turf, where it lay still for several minutes before he was revived and walked back to the Kansas City bench with help provided by two teammates.


He would return later in the game, however, and played a key role in the Chiefs’ victory when he laid a vicious forearm to the helmet of wide receiver Glenn Bass, forcing a fumble that set up Kansas City’s game-clinching final touchdown.

In the days leading up to the first Super Bowl two weeks later, Williamson famously boasted he was going to knock Green Bay Packers starting receivers Carroll Dale and Boyd Dowler out of the game.  Oh, the irony, when Williamson himself became the victim for a second straight week after his helmet struck the knee of Green Bay halfback Donny Anderson late in the fourth quarter.
“It was a pretty good collision,” Anderson recalled in Jeff Miller’s (no relation) fabulous book, Going Long, “and he got knocked out.”


And again for the second straight week, Williamson had to be helped from the field, only this time it was on a stretcher.

It’s a record no NFL player is in a hurry to break.
Posted by Jeffrey J. Miller at 6:46 PM