How a Slice of Bacon Became a Whole Hog

LOOKING BACK
By John Turney
We have posted about "trade strings" before and will again in the future. Before we posted about a free agent Bob Mann returned huge dividends for the Lions over many years. In the future, we will talk about a lowly 19th rounder plus a bonus pick stocking a team with active players for forty years.

Today it's a 1969 fifth-round pick that grew into a lot of players and a lot of years by building his value and bringing greater returns and then the player they were traded for getting traded for more and more picks by wise moves by a general manager.

Coy Bacon wasn't in love with college. He was at Jackson State but left there to try out for the Houston Oilers but they wouldn't sign him because after a few phone calls they found out he had not graduated from school (signing players whose graduating class had not graduated was against AFL and NFL rules).

So, Bacon played minor league ball for a couple of years and was signed by the Dallas Cowboys and spent a year on their taxi squad. The Los Angeles Rams were familiar with him because they often scrimmaged with the Cowboys because both trained in Southern California at the time.

Bacon was an up-the-field type defensive lineman, not a fit for the Dallas disciplined flex defense, so in 1968 the Rams sent a 1969 fifth-round pick to the Cowboys for Bacon. Bacon was a backup in 1968, filled in for an injured Roger Brown part of the 1969 season, and from 1970-72 was a Pro Bowl quality defensive end for the Rams, though his run defense was not top quality, he was one of the best pass rushers in the NFL.
In 1971 the Rams picked up a running back the Bengals had drafted but cut named Bob Thomas, and he was a special teamer that year and filled in well in 1972 for an injured Willie Ellison and in two early-season starts, he ripped off 144 yards rushing in week one and 142 yards in week four. His stock was pretty high. Ellison came back and Thomas did start a few more games but didn't get more than 10 carries in any game that season. Still, he had value.

In January 1973, Chuck Knox was hired by the Rams and a day later, attempting to shore up the quarterback position (which suffered in 1972 with a sore-armed Roman Gabriel) and shipped Coy Bacon (who Knox didn't think played the run well enough for his tastes) and Thomas to San Diego for John Hadl.

Hadl had an unannounced back injury late in 1973 and it affected his accuracy. And it was pretty clear it had to have happened around week 10 of that season. Hadl had clearly regressed.

Don Klosterman, the Rams GM, armed with that knowledge, and the Packers, likely not. And the Packers were desperate for a quarterback. After week five they beat Hadl and the Rams and were 3-2.  Apparently, the Packers brain trust didn't think Jerry Tagge and Jack Concannon could take them to the playoffs and they thought the 1974 team was capable of getting there if they could have something close the the "1973 Hadl" with them. 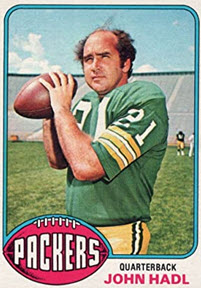 But, that's not all. Those players, after they had served the Rams were then traded and had "salvage value" or residual value. It's kind of like buying a car and trading it in a few years later for a partial down payment on a new one. If it's new enough and the car is really good (and All-Pro) you can get more for you paid in the first place.

So, here's the return on the original picks—

In 1984 Mike Fanning was traded for a fifth-round pick which the Rams used on Hal Stephens. They got no years of service from him, he spent 1984 on injured reserve. 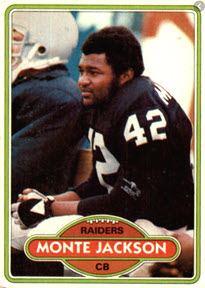 In 1979 the Rams traded Monte Jackson to the Raiders for the ole' Lawrence Welk deal "ah one, ah two, a three".

With those picks, the Rams drafted 1979 #1 George Andrews and 1980 #3 Leroy Irvin. The second-rounder was packaged in a deal that gets complicated but it did play a big part in the Rams getting Jim Collins. Using the draft value chart, we'd estimate it got the Rams perhaps five or six of the right seasons the Rams got out of Collins (no, this is not an exact science). 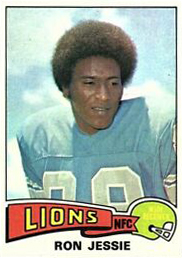 Ron Jessie was traded to the Bills for a 1983 seventh-round pick that was packaged with another pick that the Rams used to take Joe Shearin, who was on IR one year and was a backup one year.

Finally, Pat Thomas' knees went wobbly, but he felt he could still play. He was traded to the Raiders for Monte Jackson, yes that same Monte Jackson that the Raiders traded for in 1979. However Thomas failed the Raiders physical so the trade was changed to a seventh-round conditional pick, but the conditions were never met, but Jackson stayed with the Rams and even filled in for a few years.

So, the salvage value of all these players, again, including injured reserve is 30 seasons plus let's call it five seasons of Jim Collins' career and let's call it about one-third of Cromwell's career—oerhaps about 4 seasons (again, not an exact science).

The final tally for that 5th rounder? We'd say about 72½ years give or take. And that includes at least a dozen Pro Bowl-type seasons and All-Pro years from Hadl, Monte Jackson, Cromwell, Irvin and Collins.