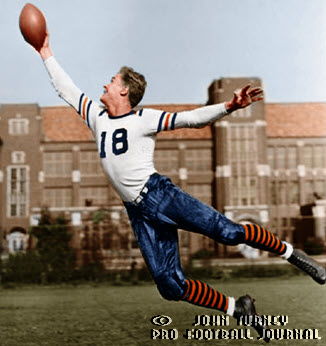 In 1936 the NFL began its annual selection meeting (the NFL draft) and for the first few years, it was pretty straight forward. The only anomaly was in 1937 when the league made the selections for the newly added Cleveland Rams who were not quite organized enough to make them on their own.

In 1939, though, the Chicago Bears were the first team to have two picks, having their own and the Pittsburgh Pirates first-round pick.
With the Pirates pick (#2 overall), they chose Sid Luckman and with their own (#6 overall) the chose Bill "Bullet Bill" Osmanski.
So, what did the Pirates get for coughing up that first-rounder to Papa Bear Halas?

The Pirates coveted Edgar "Eggs" Manske enough to send that first-round pick to the Bears. Who you ask?

Well, let's start with this:  it was another disaster for the Steelers and a boon to the Bears. Maybe worse than the second-round pick and fourth-round pick for the first-rounder that secured Dick Butkus. Maybe not, but very, very close.

Manske, for the Pirates, played six games and caught nine passes for 113 yards and one touchdown. He then "severed ties" with the club and returned to the Bears. 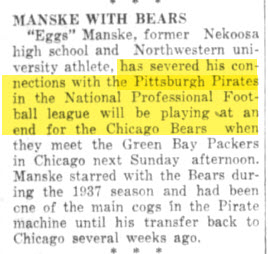 So, the Bears had their player back and they still had the pick that Pittsburgh owed them. In early December the draft was held, and Luckman, who told everyone who would listen that he was not going to play pro football, was taken by the Pirates anyway, who dutifully sent his rights to the Bears. 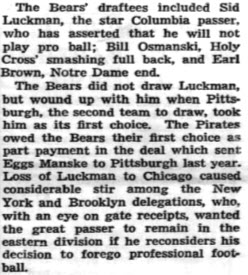 However, Halas, in the end, got his way and Luckman signed with the Bears and the two had a fairly succesful partnership over the years, to say the least! 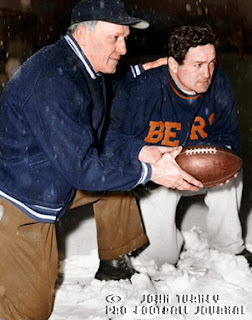 No, we have not forgotten about Manske and why he was worthy of a first-round pick. Well, because he was. He'd been one of the best ends in the NFL since 1935, outside of Don Hutson.

Using Pro Football Reference's great search tool you can see Manske's effectiveness from 1935-39 (though Manske's travels from Bears tp Pirates back to Bears was during the 1938 season) was impressive. Manske didn't do anything in 1940 and was out of the NFL after that, but given the length of careers back then and the record of other ends of the era—Eggs was a serious player at end in an era with a lot of excellent ends, Hutson, Hewitt, Millner, Johnny Blood. Bill Karr was good and earlier in the decade of the 1930s Ray Flaherty and Red Badgro were All-Pros and ended up in the Hall of Fame.