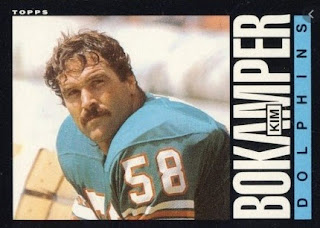 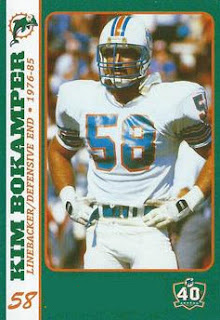 Bokamper wanted to play in 1986, he told the media that he had tried to play the run tough but going through tackles and wanted to change that in 1986. He wanted one last hurrah if you will, but in late August he was waived. Bokamper simply said he gave it his all and he could "sleep at night".
Indeed he could.
Career stats—

We wonder, though, what might have happened if he'd stayed at left outside linebacker and been allowed to be the nickel end (either left or right) in the 1980s as he had been in the late 1970s.
He was really the first to do that in earnest. (It is often hard to know who did something first in the NFL, so we use the term "in earnest" to denote that the first time something was done a lot, it was a thing, not just a once-in-a-while gimmick). Later, plenty of guys like Andre Tippett and Kevin Green did it a lot. Now, players like Von Miller and plenty of others do it. But in earnest, Bokamper was the first.
As a linebacker on the tight end side Bokampers 6-6 frame and long arms and 250 pounds were effective in stopping TE blocks and in patrolling his side for sweeps, kind of like Ted Hendricks did. And as a rusher, he was effective and getting better as his 1981-82 success showed.
But that frame was just too small, and rangy ("an angular player" the scouts called him) to play a base 3-4 scheme. That had to have hurt his career.
Or, in the alternative, why not use him as a nickel rusher, like in 1981 and some of 1982? He was effective then, especially in the playoffs, and note also he'd been excellent in the playoffs in the late-1970s as well, a "money player".
We are not in the habit of questioning Don Shula and Bill Arnsbarger and Chuck Studley but in this one specific case, they may have erred. They really didn't put Bokamper in a situation conducive to getting the most out of his skills.
No one is perfect.
Had Bokamper come out of San Jose State in 1969 or 1970, in a 4-3 era,  he may have had a career like Fred Dryer or Pat Toomay. If he came out in the late-1990s he may have been a taller Grant Wistrom or Patrick Kearney or players like that. He'd been ideal as a 40 end in those eras.
And he was excellent as a strongside 3-4 linebacker who was a nickel left end who essentially pioneered that spot. And it was taken away—for some reason even Bokamper's wife could not understand.
Maybe Coach Shula should have listed to Mrs. Bokamper. She showed a lot of wisdom.
Posted by John Turney at 11:53 AM