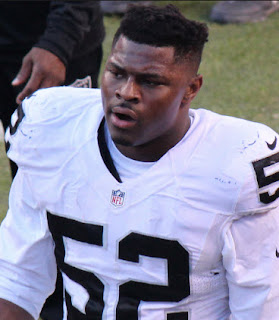 There could be a few more candidates for the NFL Defensive MVP, or Defensive Player of the Year, however one wants to phrase it.

Luke Kuechly was in the running but the devastating concussion a few weeks ago raises the question if he will even play again this season and if he did, why he would make that decision.

We will feature six players in this post, but with a quarter of the season yet to be played, there could be others that step into the line. But at this point, we see these as possibilites, to vary degrees, and have projected their 12-game statistics to 16 games, just as a comparison to other seasons they have had.

Talib has missed some time but he's been playing very well and will likely be All-Pro at corner. Since going to Denver he's been a pick 6 machine with 5 in the past three seasons. Another one (or two) would help his cause.

Sometimes a player in his breakout season could get missed by some voters, but with Collins playing in New York, that seems unlikely in his case. He's been a complete safety this year, moving from free to strong but still has been involved in coverage with 13 passes deflected and 5 picks, one for a TD. He also has 3 sacks and 2 stuffs. He will face come competition to be All-Pro at strong safety with Eric Berry coming on, so the next four weeks, if Collins makes the kind of plays he has been, he will get a few votes for Defensive MVP in our view.

Harris, Jr., like Talib, is a very consistent player in the Bronco defense. He moves into the slot when opposing teams go 3-wide or 4-wide and this season he's been excellent, but he has been for a handful of seasons now.

Donald has been seeing pots of extra attention lately and the number of big plays (aside from double-teams drawn and QB hits) have been missing for a couple of weeks. A strong finish could put him over the top, this is if he gets to double-digits in sacks and a big play or two in terms of a pick six or a scoop and score wouldn't hurt, either.

Donald does have several sources showing his ability to pressure the quarterback, the issue is they never agree as to what a hit, hurry or pressure is and often it's tough to pin down sources. So, if you go by Stats, LLC., Donald has 25 hurries. We are not sure of Gil Brant's source, but it has 53 pressures by Donald. The Rams quality control coaches give Donald credit for 20 hits and 38 pressures. Elias Sports Bureau gives Donald credit for a league-leading 25 QB hits.

Stats, LLC and Elias agree on the number (25) but they are counted in different ways, it's just a coincidence the numbers are the same.

We suppose it's fair to say Aaron Donald gets a lot of pressure on quarterbacks. 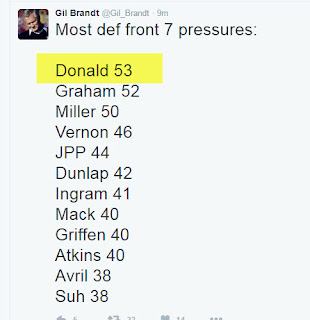 Also, there is the scouting website Pro Football Focus.com who rates Donald the NFL's top interior defensive lineman.They also rate him as second in the NFL in pressures with 64. 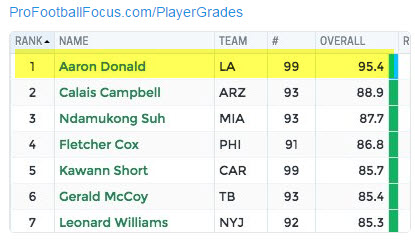 Miller got credit for the missing sack in last week's game, moving his total to 13.5. That projects to 18 or so by season's end. The Broncos run defense has not been as good as in past seasons, and though Miller, alone, cannot be faulted, it is noteworthy that his only has 2.5 run/pass stuffs this season. By comparison, he had 14 in 2012. But he's been a factor in games, playing coverage, rushing the passer, forcing interceptions. We think the race is really down to Donald, Miller, and Mack.

Miller, like Donald (and Mack) are high on the lists of QB pressures, hits, and hurries.  PFF has Miller leading the NFL with 69 total pressures. He's second in QB hits according to Elias, he is third in pressures according to Stats, LLC with 28 and and Gil Brant has him third with 50 pressures. Again, not sure of his source at the moment.

Mack is coming on strong. He was not as much a factor early in the season but he's making lots of noise lately. Tonight, he gets a chance to shine and begin to make his case. A couple of multi-sack games will push him forward and really make this a race.

The final four weeks will tell a lot, and as they say in investments, past performance isn't an indicator of future performance. Except that often it is, especially in sports.