Deacon on the Nose 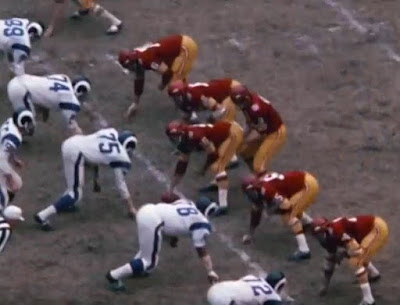 The Rams defense under George Allen was pretty straightforward—a basic 4-3 defense with overshifts and undershifts and even fronts. There was some blitzing and of course, sub-packages, the nickel.

The Rams lineman didn't move around much, but again, it wasn't totally "vanilla" either. On occasion, they would employ special things. Above is one example of a 5-1 nickel defense (five defensive linemen, one linebacker and five defensive backs) with Deacon Jones playing over the center (not his usual left defensive end position).

Over the years we've seen Merlin Olsen play some right defensive end, Jones play some left defensive tackle with Olsen playing the left end. We're not sure if that was called for or if Jones and Olsen were just messing with people. But, if you watch enough film you can see these little things and appreciate the game of NFL football a little more than before.
Posted by John Turney at 7:11 AM