Gone to Texas: When Opportunity Knocks...

By TJ Troup
Today marks an anniversary of a special day in my life. During the '79 baseball season became a big-time Angel fan as they embarked on their first playoff journey. While attending one of the Halo's victories heard my name called by a former coaches all-star game teammate Larry Kellum.

During the conversation, he asked if I was looking for a job? Sure was, and he informed me that Wayne Cochrun was looking for a head sophomore football coach at Mater Dei. The interview with Coach Cochrun went well since we had similar philosophies, and both came from Clare Van Hoorebeke's juggernaut program at Anaheim High School.

So, on August 22nd, 1979, I showed up at the administration office in my double knit three-piece suit and a full beard and quickly signed since the Angels were playing Cleveland in the business man's special afternoon game.

My boy Nolan Ryan was shelled and was out of the game by the time I arrived (13-3 loss), one of the few times the Angels lost when I was in attendance. My five years at MD were a godsend (except for payday). The guidance and friendships made there are still strong; thank you Bob Ickes. By my fourth year as co-defensive coordinator with Chuck Ball, and my final year the young men of "pride, poise, and courage" were the number one ranked defense in the county, and Mater Dei won a CIF playoff game for the first time in 16 years.

The students in my history classroom were motivated, and sure enjoyed teaching, while coaching football, frosh basketball, frosh/soph baseball, and track built a strong resume that led me to a college coaching job. To this day I still think of "MY MATER DEI KIDS"...though many are in the early 50s now.
While coaching at Riverside City College wrote letters to Steve Sabol and Paul Lionel Zimmerman and developed a relationship with both.
Dr. Z set up a trip for me to the Pro Football Hall of Fame where I was fortunate enough to meet Pete Fierle and Joe Horrigan. Years later, Joe Horrigan recommended me to George Clooney's production company, and as such that led to my being hired as the football coordinator for his movie entitled "Leatherheads". Just a fantastic experience in so many ways.
During the time since that movie in 2008, I have written two books, watched my three wonderful children grow into adulthood, and moved to Kentucky. Have made strong friendships with writers, and historians across the country. At this point in my life should be relaxing, yet that is just not me!
More goals have been set, and in February of this year heard from a Brinton Bryan concerning the story "Twelve Mighty Orphans". Coach Rusty Russell was a legendary Texas high school football coach, and was I interested in being the football coordinator for the movie? The answer was obvious. 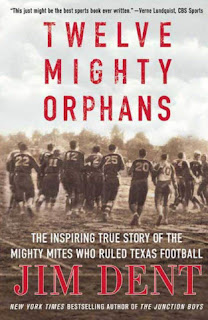 The film is based on the Jim Dent book and will star Luke Wilson and according to the Ft. Worth Business Star, "(I)s based on the true story of a group of Fort Worth orphans, who with the help of coach Rusty Russell, become one of the greatest football teams out of Texas . . . The team would often play and defeat school teams with much bigger players. . . Despite starting their quest without even a football and being outweighed, the team makes their way all the way to the state playoffs."

So, this Saturday morning the pick-up truck will be loaded with my play sheets, footballs, football film, my cowboy boots, Levi's and music CDs.....am off to Texas. My boyhood heroes hail from Texas; John Reid & Ernie Banks, and they are both Texas men (Del Rio and Dallas).

My spirited loving wife Jo Ann will come to visit and be on set in October. Last season enjoyed doing my "Tuesday Tidbits" column here at the Journal, but that obviously goes on hiatus—though based upon the idiocy I read yesterday by the painfully lazy Jeff Legwold I will be missed. For those of you who know the music of John Cameron Fogerty . . . play "Ramble Tamble". . ."Oooh oooh, down the road I go".