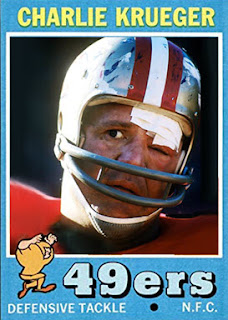 The man whose face represented the epitome of pro football has passed away—49ers defensive tackle Charlie Krueger. He was 84. According to Eric Branch of the San Francisco Chronicle Krueger passed away of heart and kidney failure.

Krueger began his career with a flash, recording a safety in each of his first three seasons, and tying an NFL mark, one he held a piece of until Ted Hendricks and Doug English surpassed him with four.

He was a Second-team All-Pro as a second-year defensive end with the 49ers in 1960. In 1961 he unofficially set his career-high with 8½ sacks as he transitioned to defensive tackle.

He hurt his knee in 1963 and according to Sports Illustrated, "Krueger was in acute pain from 1963 on...he was regularly anesthetized between and during games and endured repeated, questionable steroid treatments administered by the team physician." Still, he played and played well.

The next season, 1970, according to SI, "(D)uring a game, pieces of Krueger's left femur and tibia broke off. He was given codeine for the pain and finished that game and the season—there were five games remaining—before the fragments were removed from his knee". Still, as the 49ers won the NFC West for the first of three consecutive seasons Kreuger was a Second-team All-NFC selection

Kreuger's number 70 was retired in 1974 and among the dozen retired by the 49ers. He's also a member of the 49ers (Edward J. DeBartolo) Hall of Fame. In 1964 Krueger was voted the 49ers Len Eshmont Award, what the 49er organization calls its most prestigious annual honor.

In 49ers history, only John Brodie (17), Jerry Rice, and Jimmy Johnson (both 16) played more than Krueger's 15 seasons and he still stands seventh in most games played for a 49er (198). And though unofficial, he ended his career with 53½ sacks.

Kreuger, a member of the College Football Hall of Fame (Inducted 1983), was the 1955 Sophomore Lineman of the Year in the Southwest Conference, and then was a two-time All-American at Texas A&M where he played for the legendary Paul “Bear” Bryant. After his senior season, he was the captain of the 1958 College All-Star team, who beat the Detroit Lions 35-19 and then was the eighth overall pick in the 1958 NFL Draft. Krueger also was named to the Southwest Conference 50th Anniversary Team, covering 1919-68, and a member of the Texas A&M Athletic Hall of Fame (Inducted 1972)

His younger brother Rolf Krueger also went to Texas A&M and a decade after Charlie was taken in the first round Rolph was a  second-round pick in 1969 for the Cardinals and played six years in the NFL, including in 1972 and 1972 with the 49ers as a teammate of his older brother. 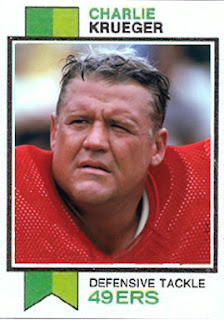 He served 10 years in the Army Reserve, retiring as a captain.  He was known for his work with Easter Seals, March of Dimes, and Max Baer Heart Fund.

The 49er organization released this statement after his passing, ""One of the longest-tenured players in franchise history, Charlie was known as the 'Textbook Tackle' for his reputation as a technician and his tremendous strength. He was a tough, resilient, and smart player who looked out for his teammates, both on and off the field. We extend our condolences and prayers to his wife, Kris, and the entire Krueger family." 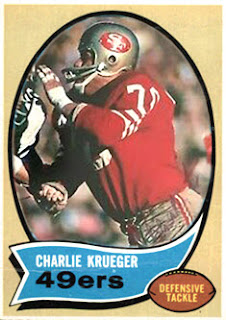 However, most who remember him won't remember the accolades the honors, and the like. They will likely remember him because of his grizzled face, scarred and beaten. They will remember him as a  defensive tackle wearing a two-bar facemask, the same kind his quarterback John Brodie wore.

He exemplified what many thought of as the "old NFL" that represented toughness and character and he wore it on his face, his soul, and sometimes that is worth more than the fame and accolades.