Irv Cross—A Gentle Man But Not a Gentle Football Player 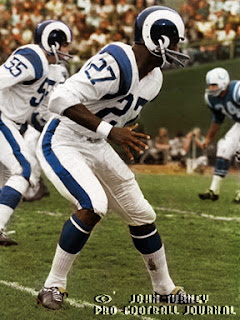 Irv Cross was as nice as you can imagine he was—based on what we all saw on television. He was kind, smart, witty.

We got to know him over the phone a little bit in about twenty years ago. He was working on a project to memorialize football's part in popular culture. Once, I mentioned Colonel David Hunt's comment on Fox News about the "Shock and Awe" bombing of Baghdad to begin the second Gulf War. Hunt said it was definitely an attempt to kill Saddam Hussain to "sack the quarterback".

Irv told said that was exactly the kind of comment he was collecting for his project. We wish we knew what became of that project because in some ways Pro Football Journal covers some of that same beat with our dedication to NFL Art, NFL Ads, NFL and Hollywood, etc.

Cross spent his first five NFL seasons (1961-65) with the Philadelphia Eagles (he was a seventh-round pick of the out of Northwestern in 1961) his last two going to the Pro Bowl. He was a tall (6-2) corner with long arms and a strong, wiry body who was solid in all phases of the game. In that era, a corner had to give good run support and Cross did. he could also cover well and had a skill that is no longer legal that he was as good as anyone in performing, the wide receiver "ax".

A corner could press a receiver at the line of scrimmage and rather than cover him the corner could just roll block the receiver to the ground. it was a risky move because if the defensive back missed the receiver was free with no one on him. But, if the corner could execute it, that receiver, was out of the pass pattern, his route was dead. Irv was special at that—no one did it better.

He could also stick to a receiver and had good ball skills as well. And—he could lay a lick on a receiver. He was a great tackler and would hit you—hard. 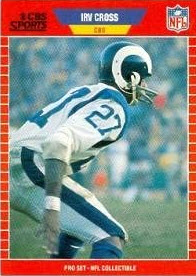 When George Allen took over as the Rams head coach Cross was one of the players he coveted and traded Aaron Martin and Willie Brown. Now, the trade was awful for the eagles, but at the time both Martin and Brown were considered young and talented prospects but Allen preferred experience and experience he got with Cross.

Cross played right corner opposite Clancy Willians (one young player Allen did like) and contributed mightily to the best defenses in Rams history up until that point and maybe through now.

With the Rams, Cross was a very good kick returner and a tremendous kick-blocker (we rank his seventh-best all-time) with sixteen blocked kicks in his career. In 1966 he tied the Rams record for most kicks blocked in a season with four blocked field goals and ended his Rams career with seven (good for fourth on the Rams leader board in that category).

In the summer of 1969 Cross wanted to get into coaching and had an opportunity to be a player-coach with the Eagles and Allen included Cross in a deal that sent him and Joe Carollo and  Don Chuy for disgruntled Bob Brown and defensive back Jim Nettles. 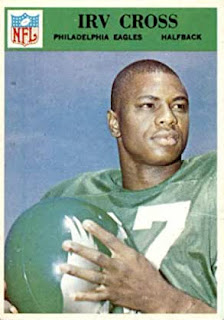 Cross even helped his Eagles obtain speedster receiver, Harold Jackson. George Allen wanted fullback Issy Lang and was offering rookie defensive end John Zook and change, and some of that change was a receiver, presumable of his choice.

The story goes is Allen had Wendell Tucker and Harold Jackson run a race, maybe forty yards, we are not sure, and Tucked edged Jackson and that is what made Jackson expendable. They were supposedly that close in skills and ability.

So, the Eagles coach approached Cross as asked his opinion of Jackson who had just arrived in Philly and Cross said "If you can get him, do it. He can fly". Jackson, went on to have four excellent seasons in the City of Brotherly Love.

In his career Cross had registered 22 interceptions 9returning two for touchdowns), 14 fumble recoveries. Cross also averaged 27.9 yards on kickoff returns and returned punts as well. In 1967 Cross forced three fumbles and had 10 passes defensed and 47 tackles. In 1968 he made 70 tackles and in 1966 he had 61 tackles with 16 passes defensed.

Cross didn't get any honors for those years (honorable mention All-Pro in 1966 and 1967 by UPI) but he was more than solid even without the "Alls".

Cross coached for a couple of seasons then resigned and got into broadcasting doing games in 1971. Then in 1975, he joined The NFL Today pregame show and Americans became familiar with his easy-going, smooth style.

Later, in the mid-1990s through mid-2000s Cross was the athletic director for Idaho State and Macalester College.

Cross graduated from Hammond (Indiana) High School in 1957 where he was an All-Conference Halfback in 1956 and the Calumet Region Times Athlete of the Year in 1957.

He graduated from  Northwestern University and he played both fullback and defensive end there and was a team captain in 1960, earning Honorable Mention All-Big Ten that year. As a junior, in 1959, he caught a 78-yard pass—which is still tied for tenth all-time in Northwestern annals for longest passing plays.

He was also chosen as Northwestern's Male Athlete of the Year in 1961.

In 2009 he was given the Hall of Fame's Pete Rozelle Award and is a member of the Cross is an inductee of the Indiana Football Hall of Fame.

Media reports indicate he dies in Roseville, Minnesota at the age of 81 and is survived by his wife Elizabeth; children Susan, Lisa, Matthew, and Sara, and many others.