By John Turney
Yesterday the Hall of Fame Seniors Committee met and picked three nominees that will be submitted to the entire committee before next year's Super Bowl. One of them was Chuck Howley. He will have to get 80% of the full committee to vote "yes" for him to be elected to the Hall of Fame—So it is not a sure thing though it would be unfathomable for him to be voted down. There have only been a few instances that a senior nominee was rejected by the full Hall of Fame Committee.
Here are Howley's partial statistics and his complete post-season honors. 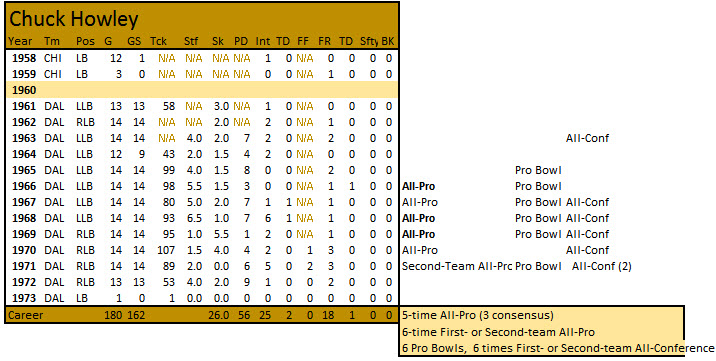 Howley began his career with the Chicago Bears and he played quite a lot as a rookie and picked off a pass. The next season he severely injured his knee and it kept him out of football for a year.
In 1961 he got a ring from Dallas, and feeling his knee was sufficiently healed, the Cowboys traded for him and he began thirteen seasons with the star on his helmet.
Howley was always a favorite of famed writer Paul Zimmerman who noted his coverage ability, "Jack Ham was the best pure coverage linebacker, with second place going to...oh, I guess I’d have to say Chuck Howley."
Howley was a terrific all-around athlete lettering in football, track, wrestling, gymnastics, and swimming at the University of West Virginia where he was named to the All-Southern Conference team three times as a gridder.
He totaled 26 sacks and 25 interceptions in his career and was a First-team All-Pro five times and was either First- or Second-team All-Conference or a Pro Bowler in 1963 and from 1965-71.
In Super Bowl V he was voted the game's MVP though Dallas lost that game to the Colts. The next year, versus Miami he picked off a pass and was a key part of the defense that dominated the Dolphins.
In eleven playoff games, Howley intercepted four passes and had 1½ sacks, and recovered two fumbles taking one of them to the house against the Browns in 1968.
"I don't know that I've seen anybody better at linebacker than Howley," said Tom Landry. Howley himself said, "I just hope I can be considered the best at my position."
And now as one of the three senior nominees and nearly certain Hall of Fame induction he will always be considered one of the best at his position.
Posted by John Turney at 10:00 AM