The Story of Len Ford: Rectifying a Diminished Legacy—Part 5 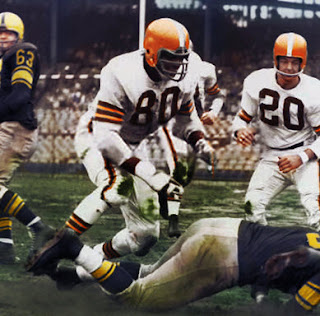 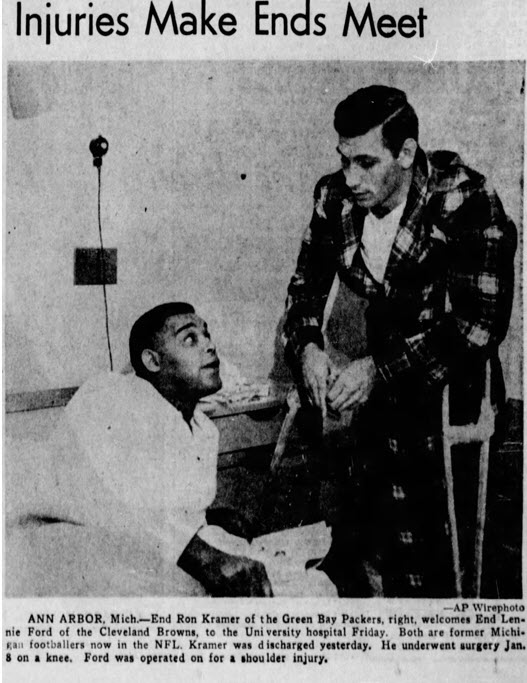 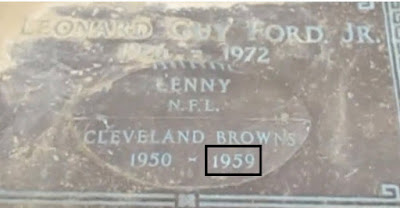 Legacy
As early as 1949, Ford was already considered a college great, even drawing mention along with Bob Mann and Bill Hewitt by a first-term Congressman from Michigan’s fifth district – and ex-Michigan Wolverine football great – Gerald R. Ford in a Touchdown Club Speech on January 8, 1949, in Washington, DC.
In Jim Brown’s 1964 autobiography Off My Chest, he rated Ford as the best defender he ever saw, Gino Marchetti second. He was always considered a tough player up there with the likes of Ed Sprinkle, Leo Nomellini, Bulldog Turner, and Hardy Brown.
In 1969 when the NFL revealed its 50th Anniversary Team Lenny was the second defensive end behind Gino Marchetti. The team technically didn’t field 11 players on defense so only one DE one DT, etc. were selected. This structure technically meant that Ford was an honorable mention or Second-team, though he would be First-team on a squad of 11 that had two DEs. When the NFL issued its 75th Anniversary Team in 1994, Gino Marchetti, Deacon Jones, and Reggie White were the three DEs selected with Lenny dropping off.
Finally, the NFL's 100th Anniversary Team selected in 2019 had DEs Gino Marchetti and Deacon Jones as unanimous selections and Doug Atkins, Bill Hewitt, Lee Roy Selmon, Bruce Smith, and Reggie White closing out the team. Bizarrely, Doug Atkins and Bill Hewitt each completed their careers prior to the selection of the 50th-anniversary team of which Ford was a member, yet somehow, they leap-frogged him on the 100th.
In 1976 Ford was posthumously elected to the Pro Football Hall of Fame in, at the time, the smallest class the Hall had initiated (tied with 1972’s three-man class) along with Packer fullback Jim Taylor and player/coach Ray Flaherty.  Ford’s family requested that both Morgan State and Michigan be listed on his profile.  Ford was presented for enshrinement by his old high school coach Ted McIntyre and his daughter Deborah accepted on his behalf saying.  “He was guided by the philosophy that winners never quit and quitters never win and if he was alive today, I’m sure he would be a symbol of that wisdom.”  She finished off with, “To my father, who longed for this day . . . Congratulations, Daddy.  You’ve made it”.
A 1977 Pro Football Digest All-Time Team now placed Deacon Jones in the second slot above Ford. Ford was placed in the Hall of Honor at University of Michigan in 1996, the second ‘Ford’ in the Hall, joining former President Gerald Ford.
So where is Lenny’s place in the pantheon of pass rushers?  In our view his peak is on par with the best of all time, as good as that of Gino, Deacon, Reggie, and J.J.; but like J.J. albeit for different reasons that peak was too short to be on the Mt. Rushmore of pass rushers which suites Marchetti, Jones, and White with a great debate for the final spot. Leonard Guy Ford was an all-time great and a marvel to watch but both his athletic peak and his life were unfortunately short making him in many ways a sad cautionary tale.
Posted by John Turney at 3:13 PM