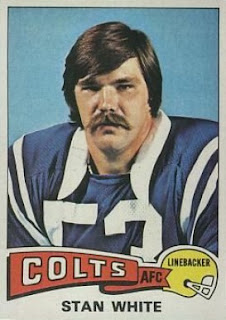 Players who can "do it all" have been written about since we've followed the game. Often it is about a defensive lineman who can rush the passer and play they run. Or, it can mean a defensive back who can cover and also play the run. It might mean a quarterback who can pass and run. You name it.
One such duel responsibility might be a player who can be successful as a blitzer and also has enough ball skills in coverage to get some interceptions.
It is interesting to note there have only been four seasons in which a player had six or more sacks and six or more picks and Colt linebacker Stan White has two of them. Rodney Harrison and Dave Duerson are the others. It needs to be noted that prior to 1982 sacks were unofficial but they were gleaned from NFL Gamebooks of that era.
White was a weak-side linebacker (called "Buck") in defensive coordinator Maxie Baughan's terminology and at 6-1, 225 pounds he was not a big one at that.
He was a 17th-round pick (yes, they used to have that many rounds) out of Ohio State where he had a good collegiate career. It can likely be inferred that his lack of size was the reason he went so late in the draft.
His two "6-6" seasons were in 1975 and 1977 but throw in 1976 for a three-year span total of each statistic he had 18 picks and 18½ sacks. In that 1975-77 set of seasons, the only other NFL player with ten or more sacks/picks was Tom Jackson of the Broncos who had 11 sacks and 13 interceptions so really, no one else was close.
White is no household name but it's an interesting footnote that no one combined blitzing AND coverage better than he did, at least for two seasons.
Interestingly White has another claim to fame. He's third on the all-time list for takeaways among linebackers behind Hall of Famers Jack Ham and Ray Lewis.