Christian McCaffrey—'One Bourbon, One Scotch, and One Beer'

By John Turney
Christian McCaffrey became the eleventh player in NFL history to have a rushing touchdown, a passing touchdown, and a receiving touchdown.
We think we were among the first to report it. In fact, just after McCaffrey caught his touchdown pass we Tweeted that he could get the touchdown trifecta.

When he accomplished the feat we posted this Tweet with the research, of course, done via Pro Football Reference's search engine - Stathead. 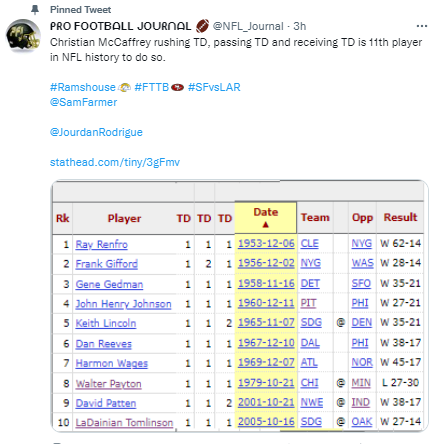 Four of the previous ten are Hall of Famers—Gifford, Johnson, Payton, and Tomlinson. Pretty good company for McCaffrey.
Now, with a hat tip to Quirky Research, there is an oddity within an oddity. On October 29th, 1944 the Philadelphia Eagles were visiting the New York Giants and Roy Zimmerman ran for a touchdown but also threw a touchdown—to himself, meaning a caught one as well.
Here is the boxscore of the game from the New York Daily News— 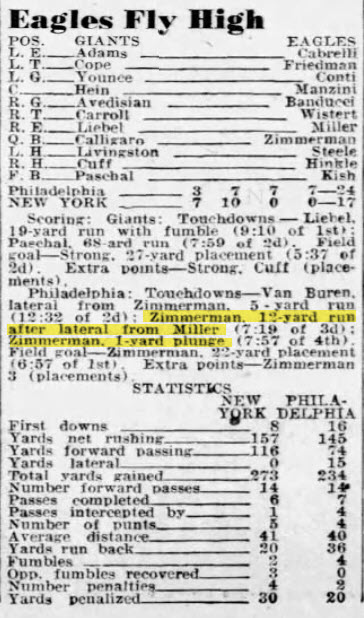 It lists the 12-yard run after the lateral from Tom Miller. The thing is he threw the ball to Miller in the first place. Here is a newspaper clip describing the play—

Since there were only two total touchdowns it is hard to say he should be the twelfth player on this list. But, then again, why not?
We love it when oddities happen and today's was pretty interesting, getting a touchdown three different ways.
As George Thorogood might sing, "One rushing, one passing, and one receiving."
Posted by John Turney at 7:00 PM