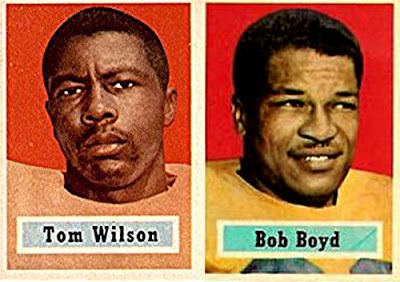 The Rams’ Tom Wilson and Bob Boyd were one of just
three duos to gain more yards at the expense of the Packers
than Le’Veon Bell and Antonio Brown did Sunday night.

Bob and weave. Thrust and parry. Slash and burn.

How ‘bout Bell and Brown?

Powered by Brown and , the Steelers erupted for a season-high 462 yards as they outlasted 31-28 at Heinz Field. Every yard was precious in a game that wasn’t decided until a last-second, 53-yard field goal by Chris Boswell.

and Brown boast big numbers. has generated more than 1,000 yards from scrimmage in four of his five NFL seasons. Brown has surpassed 1,000 yards six times in an 8-year career.

Both were at their best against the Packers. Both had plenty left in the fourth quarter.

could do little to contain them. So potent was the dynamic duo that they outgained the entire Packers team.

led all runners with 95 yards on 20 carries. He added 88 yards on 12 receptions for a total of 183 yards from scrimmage.

Brown merely fielded passes: short ones, long ones, ones only an acrobat could secure. He caught 10 for 169 yards and two touchdowns.

Together, the two produced 352 yards from scrimmage on 42 plays. That’s prime-time real estate valued at 8.4 yards per touch.

projected positivity. He had four runs of more than 10 yards, and gained at least one yard on all but one of his carries.

Brown aspired to advancement. He had four catches of 20 or more yards, and each of his 10 catches brought a first down.

The two Steelers accounted for 76.2 percent of ’s offensive output. They upped that percentage to 81.6 on the team’s five scoring drives.

So effective were the two that hardly missed JuJu Smith-Schuster. The rookie receiver sat out with a hamstring injury.

, however, could have used Clay Matthews (groin) and Kenny Clark (ankle). Their replacements – Kyle Fackrell (2 tackles) and Quinton Dial (1 assist) – did little to distinguish themselves.

To be fair, the Packers are not alone in having been gashed by and Brown. These gifted athletes have prevailed upon others.

Similarly, the Packers have been gouged before. Tom Wilson and Bob Boyd of the Rams (367 yards) in 1956, Calvin Johnson and Brandon Pettigrew of the Lions (360) on New Year’s Day 2012, and Jim Spavital and Rip Collins (356) of the Colts in 1950 were three duos who did more damage than Brown and .

In , and Brown finished strong. The two accounted for all but seven of the Steelers’ 152 yards in the fourth quarter.

Brown caught four passes for 83 yards including a 33-yard grab that put up 28-21. chipped in 62 yards on nine plays including an 11-yard dash that preceded Brown’s score.

When 17 seconds remained and the Steelers had the ball at their own 30-yard line, to whom did quarterback Ben Roethlisberger turn? Why Brown and , of course.

Roethlisberger fired passes of 23 and 14 yards to Brown. His final throw went to for minus-2 before Boswell stepped in for the winning kick.

The Buddy System
The eight instances in which two teammates combined for 340 or more scrimmage yards in a regular-season game against the Packers.