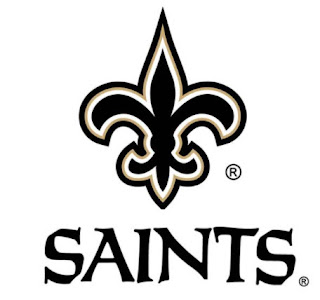 This year we are picking All-Time All-Rookie squads for each of the NFL franchises. Today the Saints get our treatment—with this one caveat:  At the end of the season, we will put in rookie phenom Marshon Lattimore. For now, however, we picked the teams through the 2016 season. We want a chance to review all the rookie seasons for all the teams before we update but it is a safe bet that Lattimore will achieve one of the two First-team slots on the Saints team.

Here are our selections: 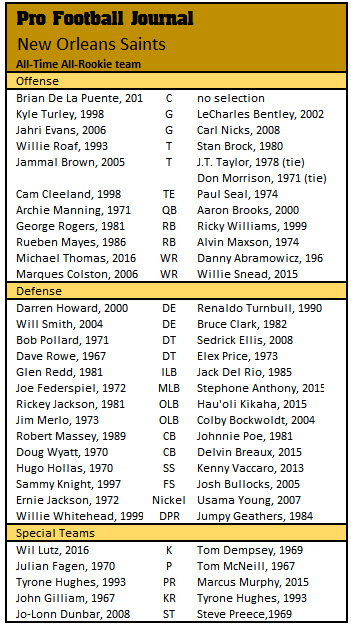 Archie Manning, 1971, and Aaron Brooks, 2000, are the quarterbacks, First- and Second-team respectively.

Willie Roaf, 1993, and Jammal Brown, 2005, are stellar tackles. They are backed by Stan Brock, 1980, and J.T. Taylor, 1978 (tie), Don Morrison, 1971 (tie). Taylor and Morrison were not All-Rookie picks but both were starters on two of the better Saints teams of the 1970s. We just couldn't find enough to separate them so we tied them for the final Second-team spot. Kevin Haverdink is the lone honorable mention for his consensus All-Rookie performance of 1989.

Wil Lutz, 2016,  Tom Dempsey's, 1969. Lutz was just too good 28/34 FGs and 133 points. Dempsey was All-Pro in 1969. We do "grade on a curve" taking into account the era and this was a close call. Being All-Pro means Dempsey was considered the top kicker. Lutz, while excellent was not. But if a player can have a season like Lutz did in 2016 and it not top someone from an earlier era it would make it impossible to ever supplant the older players. So, we went with Lutz. But, we admit, we could be wrong. It's that close in our eyes.

Willie Whitehead, 1999 (30 tackles, 7 sacks), is our First-team designated pass rusher followed by inside rusher Jumpy Geathers, 1984. Ernie Jackson had a good year in 1972 as a nickel back as did Usama Young in 2007.