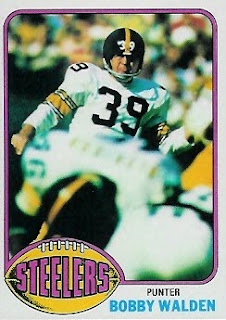 We were saddened by the passing of Bobby Walden last month. He punted for fourteen seasons in the NFL after three seasons in the CFL. He was a Georgia legend and a very good NFL punter.

We've taken a keen interesting in punters recently, trying to backdate the NFL's punting statistics (with mixed success). Bobby Walden. was one player we were able to get enough to show a net punting total.

The last clear memories of him that we have is in Super Bowl X when he was having a difficult time getting punts off so it wasn't a terrific game (or season, really even though he was a Second-team All-AFC choice). And beginning in 1972 through the end of his career he had five punts blocked after eight seasons of having none blocked.

Though not complete our data shows that if net punting were kept in the time he played (it became an official statistic in 1976) he would have led the NFL in that stat twice— in 1964 and 1970, once with the Vikings and once with the Steelers. 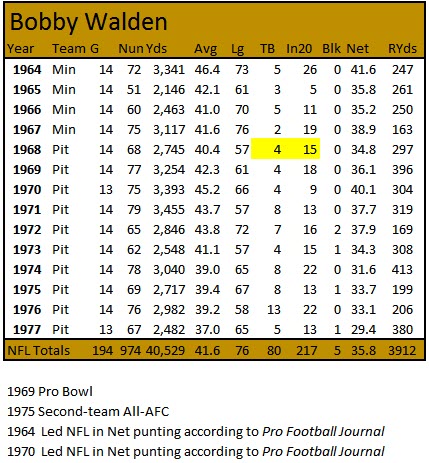 He also had a goodly number of punts that ended up inside the 20 and relatively few that went into the end zone for touchbacks, especially in the first decade of his career.

Perhaps one day we can get more complete records to finish our project but until then we will salute those whose data we have and who have excellent careers. So for now, it's well done Mr. Walden. Well done.