Youngblood, Dobler and Merlin and the "Cheap Shot": Who Got It Right?

A few years back Jack Youngblood approached Conrad Dobler and an event of some sort and said "Conrad you've got to stop telling that story, it didn't happen that way".
Apparently, Dobler had been recounting his version in a story about a 1976 St. Louis Cardinal-Los Angeles Rams game that was nationally televised. In that version, Dober remembered things Youngblood didn't, but now, we may have the details that will get everyone on the same page.

The story in question has been recounted in three different books—New Thinking Man's Guide to Professional Football by Paul Zimmerman, They Call Me Dirty by Conrad Dobler, and Blood by Jack Youngblood and Joe Engle.

The problem is the stories do not match the event, at least in the details, and as you know that is where the devil is found. In Zimmerman's book, Merlin Olsen is telling the story and it is found on page 12:

Then, there is a more sinister version Dobler's book:
Dobler maintains that there was an attempt to take him going low into his knees, something that would cross even Dobler's line of ethics.

Finally,  there is the Youngblood version as told to Joel Engle: 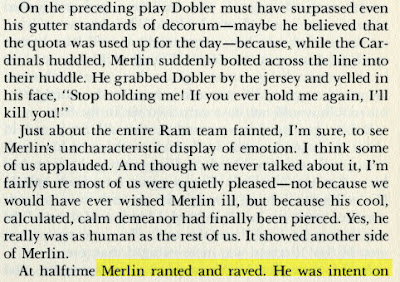 Okay, so who is right? Well, all three are off a little bit. The part that bothered Youngblood was the version that he went after Dobler's knees. Youngblood maintains it was a hit to the ribs. Olsen and Dobler say the failed and Youngblood hit Olsen's legs. That isn't accurate, either.

Youngblood did hit Dobler's ribs, but the "Dick Butkus pop" was not accurate, either, there is some embellishment there. These days Youngblood concedes that point, "I didn't hit him as hard as I wanted".

Once in a while, the football gods smile on you and now we have the play in question on video. It shows that maybe Dan Dierdorf was the most accurate when he was asked about the play and he said "All I know is I stood up to block Jack and there was no one there".

The play:
As can be seen, Olsen did hold up Dobler, Youngblood then hit Dobler with a glancing blow to the ribs and for a split second, you can see Dobler dive at Youngblood, as was told in the Youngblood/Engle version of events.
The play resulted in a Rams interception and an altercation of words between Dobler and Youngblood in the following clip.
But, since the "eye in the sky does not lie" it is best to let the viewers make their own my view is the answer is found in the lyrics of the Buffalo Springfield song "For What Worth" when the group's Stephen Stills croons "Nobody's right if everybody's wrong".
Posted by John Turney at 11:04 PM