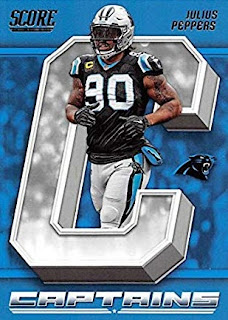 After 17 seasons and 266 games, Julius Peppers called it a career today. He began that career in 2002 with the Panthers, the second overall pick in the 2002 NFL draft and ended with the Panthers with stints with the Bears and Packers in between.

He was a four-time All-Pro (three consensus) and was a second-team All-Pro in two additional seasons. He was a nine-time Pro Bowler and PFJ named him our All-Pro nickel rusher in 2017 as well.

In addition to those honors, he was—

His 159.5 sacks and 52 forced fumbles are among best-ever as are his 13 blocked kicks. His sack total is fourth on the official list and fifth when pre-1982 sacks are included. He also picked off four passes and returned four for touchdowns and is credited with 86 passes defended unusually high for a defensive end.

Here is his career in a capsule— 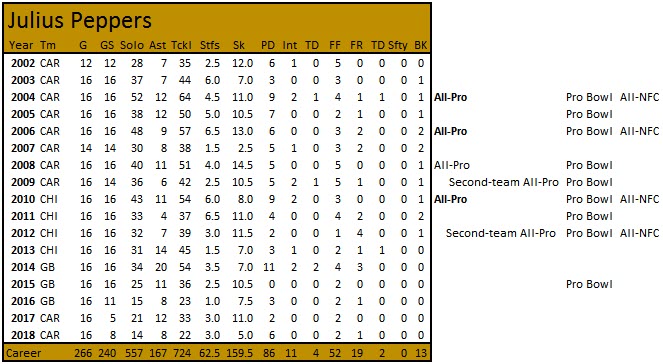 Where does this place Peppers in the All-time realm? 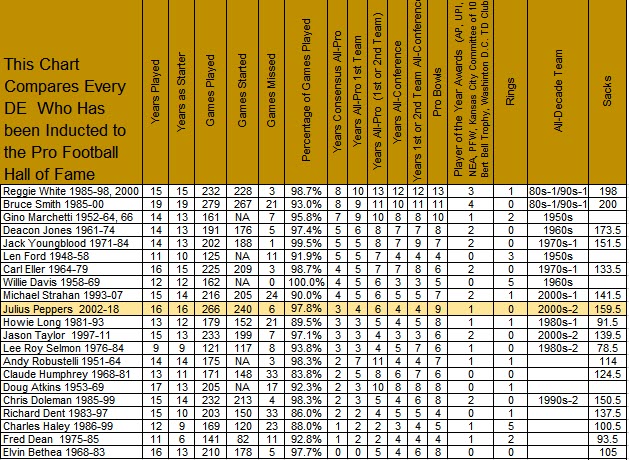 As can be seen, Peppers fares well against Hall of Famers, right behind Michael Strahan and ahead of Jason Taylor, two recent inductees.

We expect Peppers to get in the Hall right away, if not first ballot, soon thereafter. However, it has to be noted that first-ballot among defensive ends can be very tricky. Jason Taylor got in right away and thus has his named etched with Reggie White, Bruce Smith, Gino Marchetti, and Deacon Jones as the only defensive ends to be first ballot. Strahan had to wait a year. Jack Youngblood, whose credentials were very close to Deacon Jones, had to wait more than a decade. As did Carl Eller. So it's clear the voters in the 1990s mucked up the defensive ends/first ballot thing pretty badly.

The only slight negative we see is a lack of tackles for loss (run stuffs) in the running game, totaling 62.5 in his career. Jason Taylor, not known as a supreme run stuffer had 76.0, Willie McGinest another edge player had 89.0, Terrell Suggs has 94.0 stuffs but that can be seen as something to those players' credit rather than a big issue for Peppers.

So in five years, we will see, but it's apparent that Peppers had a long and unique career with special skills and he will be treated fairly by the voters.
Posted by John Turney at 10:53 AM