Quite a bit has been written this past week about the Patriots defense employing a 6-1 front and playing a lot of quarters coverage behind it. It worked well for Bill Belichick and the Patriots.

Here is a shot from the All-22 where you can see the basic alignment the Patriots used to thwart the Rams offense. You can see the six players on the line of scrimmage backed up by one linebacker and the secondary, here showing off-man free, but the Patriots would vary the coverages, often Cover-4 (quarters) but also other coverages. 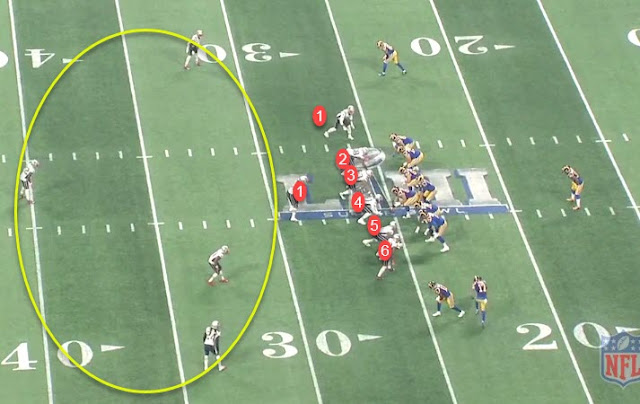 In Super Bowl III the Colts used something similar. From their 4-3 they used the diamond front with the left linebacker and right linebacker on the line of scrimmage. They played their secondary in the same "look" but usually played Cover-3, but would mix in Cover-4 or Cover-2.

Here is a screenshot of the All-22 of Super Bowl III. 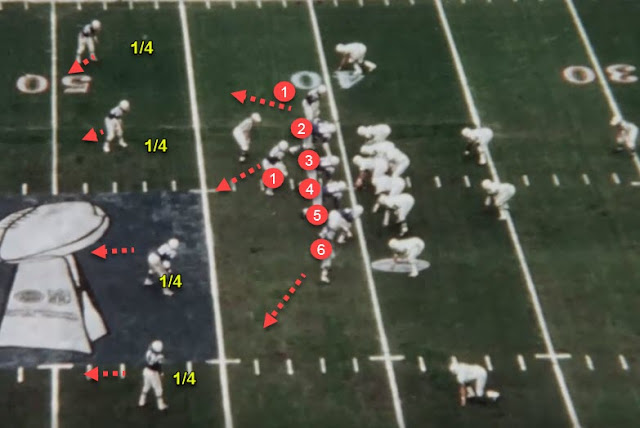 As we know, Joe Namath figured it out and beat the Colts 16-7. Sometimes it works, sometimes it doesn't. But, it was fun seeing an old school front employed in the NFL these days.

Belichick used it because it widened the edges and put the Pats in a better position to stop the outside zone runs and the jet sweeps the Rams like. It also eliminates the "bubble" on the line of scrimmage. However, it does leave bubbles on the second level with the one linebacker in the middle of the formation.

Everything old is new again.
Posted by John Turney at 1:16 AM