Testimonials and the Hall of Fame—Marvin Harrison

PERSPECTIVE
By John Turney
A few years ago when there was a big brew haha over Terrell Owens regarding the Hall of Fame and to a lesser degree Randy Moss and whether they were First-ballot Hall of Famers or not, Marvin Harrison's name was not brought up much. We remember it as being used a bit, but it was always a name held in lower esteem by the highlight worshiping crowd, at least that's our view.

However, in so many ways Harrison was more productive than the bigger, strong, even faster and taller pair. He was All-Pro more often, went to more Pro Bowls, was able to secure a ring, averaged more catches and yards and the same number of touchdowns per 16 games that the highlight duo.

Here is a chart showing those stats and honors.
(Click to enlarge) 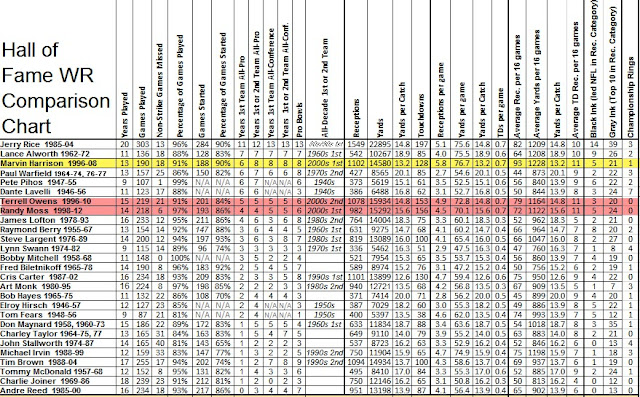 Now we think Owens and Moss are Hall of Famers, but we questioned if they deserved the same honor that Jerry Rice did, that of first-ballot inclusion. But Hall of Famers they are and they earned it.

However, we found it interesting that when asked, at least three great cornerbacks named Harrison as their top guy, not Ownes and Moss. The following is what we call "testimonials" or "what they said about . . . ". They are comments from opponents and teammates and even coaches that assess the skills of NFl players.

This type of reporting was more common in the literature of the 1950s-1990s than it is now. We don't see (at least we don't see them) as many articles that require a reporter to take some time and ask players questions like, "Who is the best you faced?" or "Who gave you the most trouble?" or "Who is the toughest player you had to blocked?"

However, we do find some and here, Charles Tillman, Charles Woodson, and Champ Bailey all comment on Harrison and we found it quite telling. 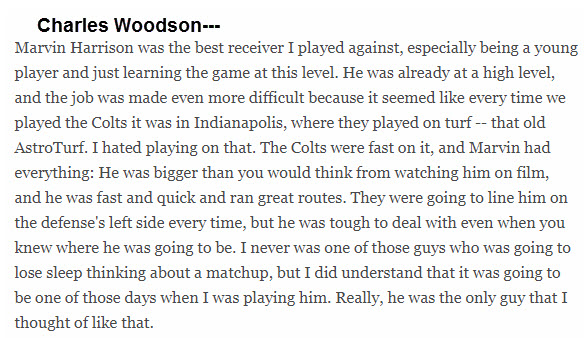 We would love to see some of these that are as clear and definitive for Owens and Moss as they are with Harrison or Jerry Rice. Maybe Harrison should be complaining about not being a first-ballot Hall of Famer.
Posted by John Turney at 6:50 PM