Are ACTUAL Politics Really Necessary in the Hall of Fame Process? 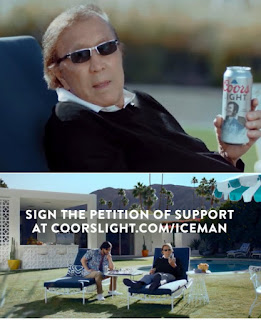 Today, as reported by KEWQ Channel 3, Sacramento, California Latino Legislators voted on a resolution calling on Tom Flores to be inducted into the 2021 Pro Football Hall of Fame.
This is silly on a couple of levels. We've known there have been small "p" politics in Hall of Fame voting fora long time. But never (or rarely) have actual politicians tried to taint the process. That has changed.
First, the vote was already taken. The voters met on the 18th of January, 2021, met and voted up or down on Flores' candidacy. No one knows the vote. Well, some do—like Coach Flores who has surely been told by now by the Hall of Fame s president that he will get a Gold Jacket.
We are simply sure (though we've not been told anything) that Flores been voted in. It will be announced this upcoming Saturday at the NFL Awards Ceremony the day before the Super Bowl.
So, there is nothing these self-serving politicians can do about the Hall of Fame vote in any case. Nothing. They can pass a resolution calling on Peyton Manning's election to the Hall of Fame, too. But it will do zero good. NONE. At least in many resolutions, there may be something pending that a resolution can actually change. In this case, the horse is long gone and these people are voting to close the barn door.
In fact, the Coors Light campaign had more of a chance to impact voters (it didn't) than this resolution. But at least Coors Brewing Company ran the commercial BEFORE the vote.
Second, the resolution is not accurate. Tom Fears, who was the head coach of the New Orleans Saints from1967-70 was the first Hispanic/Latino to be a head coach in the NFL. Fears was born in Guadalajara, Mexico, of an Angelo father and a Mexican mother.
Next, they mention his being someone with a Super Bowl ring as a player, assistant coach, and head coach. And yes, that is technically true, but of course, misleading since he was a bench warmer in 1969 for Hank Stram's Super Bowl-winning Chiefs. In political discourse (when these folks know well), that would be known as "spin". And it's also not relevant because Mike Ditka is not in the Hall of Fame (the other player with those achievements) is in the Hall of Fame because he was one of the best players at his position in the history of the NFL. Not for his time as a head or assistant coach.
Also, this resolution mentioned, "Of the thirteen coaches in the NFL's history to win two or more championships, Flores is one of only four who have not yet been inducted into the Pro Football Hall of Fame along with George Seifert, Mike Shanahan, and Tom Coughlin."
Have these politicians heard of Buddy Parker? or to them does the phrase "championships" mean Super Bowl wins? Again, in political parlance, this is dissembling. 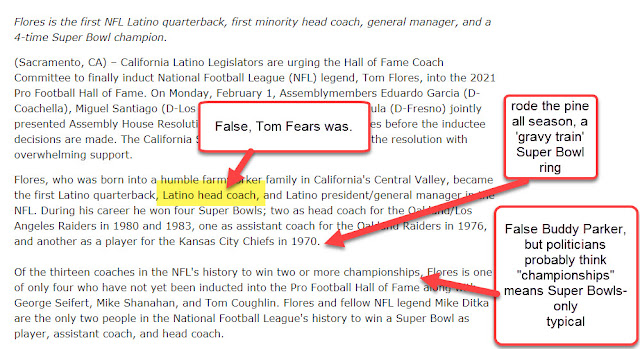 Is politics needed in the Hall of Fame process? Certainly, this kind of thing has been done before for the candidate, we've not looked it up. But if so, then and now, it's a poor idea. And even if it were a good idea, at least be accurate, though politicians are not known for being accurate with facts, so there is that.
Politicians and non-binding, none-of-their business resolutions matter as much as this SNL clip from the 1990s—
video clip: SNL, Fair use claim
Also, as we mentioned, it's a done deal, no matter the outcome (and those for Flores can rest assured, his two wins as the head coach of the Raiders are enough to have gotten him in this year's class of the Hall of Fame and overrides the negatives in his "second-act" failures in Seattle.
Just give it a handful more days and everyone can celebrate Coach Flores' career. He will be happy and so will his fans.
Posted by John Turney at 5:38 PM