Another Great One Gone—R.I.P. Mike Lucci 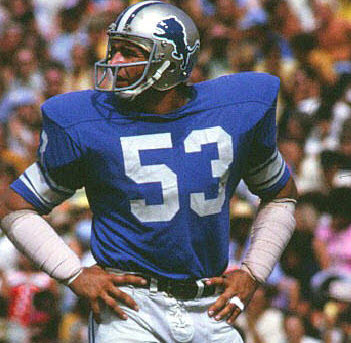 This morning news came over social media that Lions great Mike Lucci had passed away at 81. Lucci also played for the Cleveland Browns for three seasons before being dealt to the Lions in 1965.
Actually, it was a three-way trade in a sense. The Browns sent Lucci and a draft pick to the  New York Giants for Erich Barnes. Then Lucci, Darrell Dess, and a draft pick were sent to the Lions and the Giants received Earl Morrall.
Lucci had been a backup middle and outside linebacker and special teams player (a very good one) for the Browns but the Lions were preparing for the retirement of middle linebacker Joe Schmidt who was going into his 13th NFL season. Lucci spent that season backing up Schmidt and then in 1966 Lucci was the starter and held that position through the 1973 season. 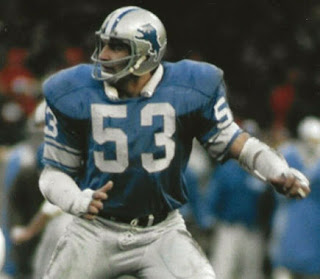 In that eight-year span, Lucci received post-season honors from 1969-71, was the team defensive MVP those same years, and served as the Lions’ captain for six seasons. In 1969 Schmidt, now the Lions head coach, described Mike as “the best linebacker in the NFL in this year".
Also in that eight-year span (1966-73), in a league filled with middle linebackers named Dick Butkus, Ray Nitschke, Willie Lanier, Nick Buoniconti, Tommy Nobis, Mike Curtis, Lee Roy Jordan, none of them picked off more passes (21) than Lucci who was first among all middle 'backer in that category for those seasons and Lucci returned the most picks for touchdowns (four) as well.
An Ambridge, Pennsylvania, native he was from a first-generation Italian immigrant family. His father was a steel worker in the town of Ambridge which is located right across a bridge from Aliquippa (Mike Ditka's hometown) who was their big rival. Being the same age Ditka and Lucci played against each other in high school and the summer after high school both were lifeguards at Raccoon State Park and began a lifelong friendship.
Both athletes had earned football scholarships to the University of Pittsburgh but after one year Lucci transferred to the University of Tennessee. As a Vol, he was All-Conference in 1960 and 1961, and received honorable mention All America in 1961 (UPI), and played in the 1962 Chicago College All-Star Game.
He was drafted in the fifth round of the 1962 NFL draft (held in December 1961) by the Browns where he was All-Rookie in 1962 and earned an NFL championship ring in 1964 before his aforementioned trade to the Lions the next August.
He also appeared as himself in the 1968 film Paper Lion which was based on sportswriter George Plimpton's tryout with the Lions in 1963.
After his NFL days, he was a WJR radio analyst for Lions games from 1976-78 as well as for NBC the next two seasons. He was a successful business executive and entrepreneur in the Metro Detroit Area. He was the former president of Bally Total Fitness and he also co-owned 19 Burger Kings in Michigan and Illinois. He was also a co-owner of Venture Contracting and Development based in Troy, Michigan.
Lucci is a member of the Beaver County Sports Hall of Fame (1979), the Pennsylvania Sports Hall of Fame (1986), the National Italian-American Sports Hall of Fame (1995), and the Michigan Sports Hall of Fame (2003). In 2017, he was named the Lions' Ricky Sandoval Award winner for his contributions to sports and the community.
Lions owners and chair Sheila Ford Hamp released this statement—

"We are deeply saddened to learn of the passing of Mike Lucci, whose passion for life was felt by all who knew him. Many will remember Mike for his toughness as a player during his nine seasons with the Lions. . . His positive presence as a leader within our Lions Legends community made him a familiar face to all, and his willingness to give back will always be part of his great legacy. We extend our heartfelt sympathies to his wife, Patricia, and the entire Lucci family." 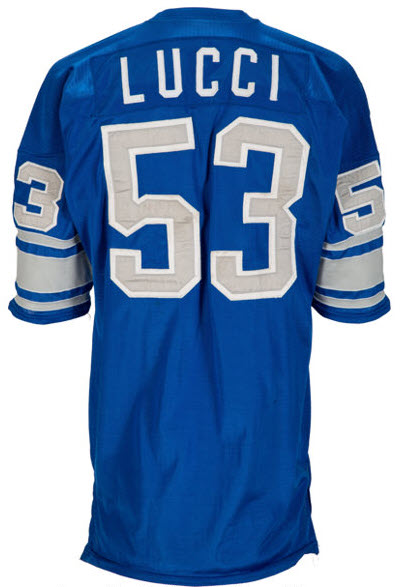