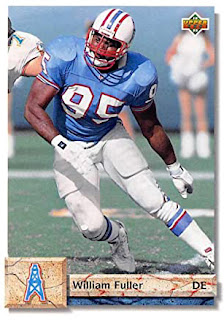 Former North Carolina defensive tackle William Fuller was a defensive lineman for the Tar Heels from 1980 to 1983. He was a consensus All-America as a senior and totaled 81 tackles and led the team with five sacks and 17 tackles for a loss. He also earned First-team All-America honors as a junior and is one of only seven Tar Heel players to be named First-team All-America twice. He is one of only three defensive linemen ever to make the All-ACC team three times. Tar Heels defensive MVP and received a Japan Bowl invitation. 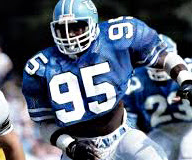 Fuller had 22 tackles for losses in both 1981 and 1983. He still holds the UNC career record for tackles for losses with 57 and ranks sixth with 20 sacks. He also forced four fumbles and recovered three; broke up nine passes and made 157 career tackles.
He was voted to the 2016 College Football Hall of Fame class in 2016. He had been inducted into the Virginia Sports Hall of Fame twelve years earlier. Two years before that he was named to the Atlantic Coast Conference's 50th Anniversary Football Team. He had a boatload of honors.
Fuller was selected by the Philadelphia Stars in the 1984 USFL Territorial Draft and signed with the Stars for four years and $1.6 million. In the Summer he was also drafted in the NFL supplemental draft of players in other leagues (USFL and CFL) by the Los Angeles Rams.
Coming out of school he was 6-3, 250 or so pounds, and had a 4.8-4.9 forty time—good, but not elite. But he had a solid build and good quickness and strength. Had he not signed with the USFL he would have been a first-round pick for someone.
With the Stars, he was part of two USFL championships and was a starter both years, but missed five games in 1984 with a broken foot. In 1985 he made the All-USFL team and had 8.5 sacks. 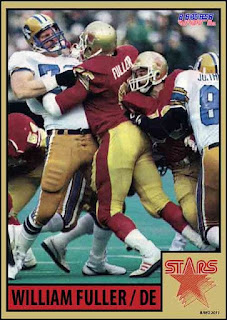 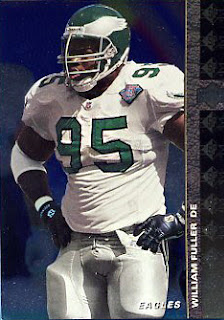 After his contract expired after the 1996 season Fuller and the Eagles tried to come to an agreement but it dragged on. The Eagles were also interested in Neil Smith who was also a free agent and making the rounds. Reportedly Smith was down to the Broncos (where he signed) and the Eagles.
Ultimately, in early April, the Eagles offered Fuller a one-year deal for $3 million. Fuller wanted a two-year deal and took an offer from the Chargers that totaled $4.4 million over two seasons with $2 million upfront.
After the loss of Fuller,  Ray Rhodes said he wanted Fuller back, "I don't want to sit here and tell you I didn't want William on this football team because I did. he added, "I think it was a pride thing for him, he wanted a two-year deal ad we thought our offer was fair." 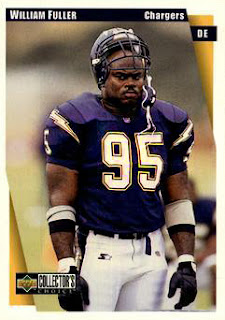 However, those final two seasons were not good ones for the Fuller Rush Man. He was still stout versus the run but in 1997 he was slowed by a quad injury and was not getting to the quarterback (3 sacks). He actually was replaced on passing downs the last half of that season (and the next season as well). He looked larger in San Diego, but we've not seen any actual weight listings, but he looks closer to 300 pounds than 285.
Even he knew he was not up to par. Fuller said, "If I don't start playing better no one is going to take me next year".
He did get invited back to the Chargers and he again struggled through the season. He had a calf injury midseason and missed a few games and for the second straight year ended with 3 sacks. Those three took him to 100.5, so he made the "Century Club" for sacks.
The Chargers were excellent versus the run, being number one in the NFL in yards allowed rushing and lowest rushing average and as a unit recorded 41 sacks, up from the 27 (an NFL-Low) in 1997 so Fuller was a big part of that, again playing mostly run downs.
Fuller would start, play in the base defense but in nickel right end Marco Coleman would move over to left end in place of Fuller and Raylee Johnson would play right end in Coleman's base position.

So, he was Fuller Run-Stop Man while a Charger.
Apparently, that was enough to interest the Baltimore Ravens because they offered him $3 million for a one-year deal in 1999. Fuller decided to retire instead citing that he was ready to spend more time with his family and that the Ravens were in rebuilding mode and he'd had enough losing with the Chargers.
The Ravens won the Super Bowl a year later. The rebuilding was quicker, perhaps, than Fuller expected.
At 6-3, 251-284 (depending on what year) today Fuller would be a solid player, in his prime he had good base, was able to stop the run with good leverage. His speed would be questioned (4.8-4.9 forty) but his get-off was good, had good quickness and excellent strength.
Some coaches now might be tempted to play him at three-technique to take advantage of his squatter physique and short-area quickness to beat guards. His skill set would be a good fit, in our view.
In watching he was were a slap-and-rip-type rusher. He would slap the shoulder of a blocker, dip, and get under a tackle with a "rip" and could hold his rush arc while being pushed out by the blocker. As a counter to that, he'd use an inside club move. He'd also spin inside once in a whole. He had okay speed, but not enough to consistently get the corner.
He also was alert, got his hands up, and as a result blocked 57 passes which would be a good asset today with as many short passes are thrown in the modern game.
In addition to end in a 40 scheme or a three-tech, he'd also make a fine 5-tech in a 30 scheme. He did that in Houston and did well in the base and today would be no different though the way 3-man fronts as changed, they no longer two-gap like they did back in the day and he'd need to play at his higher weights (285-290) but he'd be effective.
After his career, he has been involved in all sorts of community work and has always been active in defeating juvenile diabetes most of his adult life and continuing what he began during his career in supporting Special Olympics, Ronald McDonald House, and the Boys' Clubs of America among other things.
Yes, he's another of the NFL's great guys with a very good career.
Career stats—