TUESDAY TIDBITS: So When Did We Begin Keeping Statistics?

By TJ Troup
After Trevon Diggs intercepted on Sunday; which he returned for a touchdown the lazy production crew at CBS listed on the screen that Diggs was just the second player since 1970 to intercept at least seven passes in the first six games of a season.
While this is very impressive, and Trevon just might lead the league in interceptions this year, the graphic begs two questions? Who was the other player since 1970, and did the league actually record individual interception returns before 1970? My boy Rod Woodson is the other player(1993), and yes the league began listing individual interceptions in 1940.
How do I know this, why simply because I have a listing of ALMOST every individual interception return from 1940 through 2020 (am missing just a handful). You will not get the list today of who the other interceptors are, yet how about just a few from the AFL during the decade of the '60s? Goose Gonsoulin of the Broncos pilfered 8 passes in the first five games of his career in 1960.
Tom Morrow of the Raiders intercepted 8 passes in the first four games of 1963...which was part of his intercepting streak of eight consecutive games. Pete Jaquess of the Oilers intercepted 7 passes in the first five games of 1964, and finally, Ron Hall of the Patriots intercepted 7 passes in the first six games of 1964.
Does CBS not have access to the game by game individual stats in league history? If they actually want to do an in-depth job possibly they could contact me? Am not holding my breath waiting by the phone, and as we all know the NFL did not begin in 1970.
Next up is comedy from Conor Orr at Sports Illustrated! Not sure why he has a job; especially with the following quote "Goff of Detroit has a chance to throttle NFL defenses in 2021"? Goff ranks 23rd with a passer rating of 86.9, and he is averaging 9.5 yards a completion, he is the poster boy for dink & dunk. Goff is one of only five passers of the leading 32 to have his completions average less than 10 yards. The man he was traded for—Mr. Matthew Stafford is second at 13.2 yards a completion.
Checked the standings this morning, and surprisingly Detroit has not won a game. In the past have railed against Lion defensive coordinators and secondary coaches for their inability to teach team pass defense, and yes folks you know where I am going with this...Detroit is dead last in the defensive passer rating category at 113.8. Jack Christiansen is rolling over in his grave.
Ready for a fun history lesson today? Sure hope so, since watching the film was captivating. We are returning to October 17th, 1954, and are in Wrigley Field to watch the contending 49ers take on an improved Chicago Bear team. San Francisco has won in Wrigley the past two seasons, can they possibly beat Papa Bear and his nasty grizzlies three in a row?
Both Harlon Hill and Jim Dooley gain over 100 yards receiving as George Blanda is pitching the pigskin all over the lot today and keeping the Bears in the game, but it is not enough. Hugh McElhenny was so impressive as a rookie in 1952, and Joe Perry gained over 1,000 yards in 1953, but there is only one football...so who gets the ball today? For the only time in their careers together they both gain over 100 rushing! At the end of the first half McElhenny has carried five times for 71 yards, and a 46-yard touchdown scamper on a sweep right. Joe Perry has been bottled up and has gained 2 yards on six carries.
Rookie Ed Brown entered the game in the second quarter and his errant toss was hijacked by Hardy Brown and returned 41 yards for a touchdown in the key play of the first half. Both McElhenny and Perry carry the ball five times in the second half; Hugh gained 43 and his most impressive run began as a sweep left, then he reversed his field and swept right for 32 behind some crunching downfield blocks. Perry gained 117 and is the FIRST 49er to have two runs of over 50 yards in the same half (53 & 58)! Both are over the right side as Bob St.Clair deserved a game ball for his tremendous blocking. San Francisco gained 294 yards rushing as a team on just 32 running plays. No wonder they earned the nicknames of "The King" and "The Jet".
The 31-24 victory by the Niners has convinced everyone this is going to be their year(McElhenny's injury and poor pass defense derailed San Francisco), as the 49ers have now lost just nine games in the last 34 they have played.
The next stop our Nations' Capitol for the match-up of the first-place Eagles and the woeful Redskins. The past two years Philadelphia has lost in Washington, but this Eagle team is even better than the '53 team that finished second in the East. During 1951 Adrian Burk was the starter at quarterback in Philadelphia, yet the front office acquired Bobby Thomason to compete with the slender Texan for the job as the triggerman. While they both have had their moments lofting the leather in the air, they both have streaks of inconsistency. 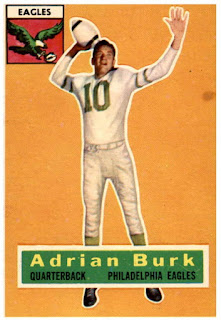 Thomason sometimes forces passes, and the rumor is Burk is not the most confident signal-caller? During the three Eagle victories, Thomason has completed 22 for 44 for 441 yards and ranks 5th in the league in passing. Burk has completed 30 of 62 for 442 yards and is ranked 9th in the league. Burk starts the game and is dead-on in completing many short and medium-range passes to his receivers. Though a Philadelphia running back might catch a pass once in a while, the Eagle passing attack is based upon a variety of formations and passes to the ends or flanking halfback. Have watched this complete game film many times, and you see double tight end with a halfback flanked wide. You see tight slot, or tight wing, with ends split or flexed, or a mixture.
Left end Bobby Walston will catch 6 passes in the game for 90 yards and has the longest reception in the game—30 yards. Pete Pihos is the defending league receiving champion and he is aligned tight, flexed, split, and is just so damn impressive on film. The stocky glue-fingered veteran runs routes to perfection, and though not fast he always finds the open area. He is athletic and adjusts well to the ball in flight. Pete latches onto 9 passes for 132 yards.
Jerry Williams demanded he be moved to offense (he was a starting safety for the Rams), and though he does carry the ball, he is basically a receiver. All three men rank among the league leaders in receptions which is unheard of in that era. Williams will catch 4 passes for 40 yards in the game. Thomason spells Burk in both the second and fourth quarters, but today is Adrian's day as he continually is on target and his receivers score. He has thrown five touchdown passes, and Thomason is back in the game and completes a pass to Williams, but Bobby is hit hard, and back into the game comes Burk.
He throws two more touchdown passes to tie Sid Luckman's league record in the 49-21 win to keep Philadelphia undefeated. The Eagles are the best red-zone passing team in the league. When the next weeks' stats are released Thomason is ranked 4th in the league, and Burk is ranked 8th. The standard in this era is average gain per pass. Using today's standards Burk had a passer rating of 64.78 after three games, and then after his record-tying performance, his rating is 86.33. How many quarterbacks improve 20 points in a week? Burk has now thrown 13 touchdown passes, and maybe, possibly he will surpass Luckman's record of touchdown passes in a season as the Eagles earn their way into the title game?
Alas, just not meant to be as the Eagles go 3-4-1 the rest of the year, and Burk continues to share the position with Thomason. In the rematch with Washington on November 28th Thomason starts but is ineffective and Burk coming off the bench throws five touchdown passes in the 41-33 home victory. How many quarterbacks have thrown 12 touchdown passes against a division rival in a season? Baugh, Luckman, Graham, Layne, Van Brocklin, Waterfield, Rote, Unitas? Ok, let's try the '60's Unitas, Starr, Jurgensen, Tittle, Ryan, Johnson, Tarkenton? Go ahead check out all the quarterbacks since the merger and see if one of them has accomplished this feat....but don't expect CBS Production to have that info.
Posted by TJ Troup at 8:29 AM