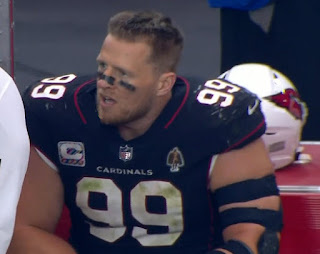 Several years ago PFJ's Nick Webster began tallying run/pass stuffs—plays made behind the line of scrimmage excluding sacks. He accounts for tackles for loss, run or pass, in the same way sacks are totaled so it is cleaner than the NFL's "TFL" stat and more inclusive than Stats, LLC's "Run stuffs" sun it includes pass plays, like a screen that result in the loss for the offense.

According to Webster's research Watt is bow the third player to have 100 or over in both run/pass stuffs and sacks—The others being Bruce Smith (200 sacks 118.5 stuffs) and Deacon Jones (173.5 sacks and a total of at least 100 stuffs). For Jones, we say "at least" because we know he has over 100, but we do not have a final total as of right now. It is somewhere around 110 but could go higher as more film is watced.

Career stats as of today—