TUESDAY TIDBITS: At The Quarter Pole. 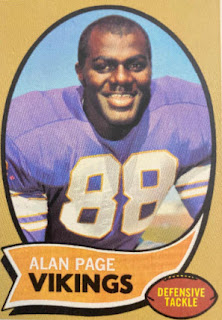 Though there will be 17 games played for each team this season; after four weeks still call this at the quarter pole. What have we learned so far? The Cardinals are for real, and Jacksonville is just not a very talented team. We have all seen teams win in this era by passing, yet this past Sunday that old adage of "lugging the leather" brought victory to two teams that desperately needed it.
Montgomery of the Bears gained over 100 rushing, and historically when a Bear has a 100 yard rushing game against the Lions—Chicago has won 23 of 28! When the Bears don't have a 100 yard rusher against the Lions they have won 80 of 155. Once upon a time the Colts and Dolphins battled for supremacy in the AFC East, being in different divisions they don't face off near as often, but this past
Sunday Taylor of the Colts kept plugging away and gained over 100 rushing in the Indianapolis victory. When the Colts don't have a 100 yard rusher against the Dolphins their record is a very poor 18-43, but Taylor's achievement gave Colts their 10th win out of the thirteen times they have had a 100 yard rusher.....what a difference!
Looking back historically for games played on October 3rd; there is a game that stands out for me. After losing to the the Giants opening day in 1969 the Vikings defense began to assert itself and become the legendary "Purple People Eaters".
They allowed only 22 offensive touchdowns in their next twenty-nine games! Please read that stat again—22 in 29! We are not going to see that ever again with the way the game is played today. Somehow Minnesota lost four of those twenty-nine, and are 1-1 as the Buffalo Bills come to Metropolitan Stadium.
There have been a handful of defenders that either could have or should have won league MVP, and in 1971 Alan Page of Minnesota was the NFL's best player. Though he recorded only 9 sacks, and did not lead the league, he was the catalyst for his team. Late in the first half leading 10-0 Page sacks Dennis Shaw for a six-yard loss, and then quickly shedding left guard O'Reilly's block Alan hits Shaw in the end zone forcing a fumble that is recovered by Buffalo for a safety, thus Page gets his second sack on the play that looses one yard. 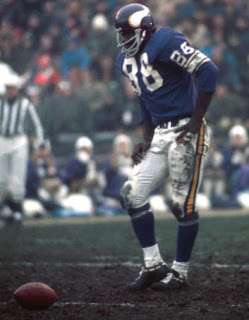 Marshall and Eller continue to pillage the pass pocket in the second half, and late in the 4th quarter Page records his third sack of the game in the 19-0 victory. Buffalo's 64 yards in total offense was their lowest ever in team history at this point in time, and also Minnesota's lowest total allowed at this point in time.

This past Saturday would have been Steve Sabol's 79th birthday, and damn I miss my friend. If I was at NFL Films yesterday would have had my cup of coffee in hand, and Steve and myself would have discussed the games of the weekend, philosophized about the current NFL, and am sure we would have laughed at one of his entertaining and funny stories.
Posted by TJ Troup at 11:04 AM