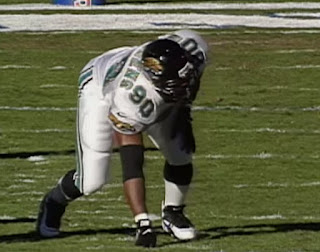 Tony Brackens didn't start in his first two NFL seasons but he was an impact player for them ust the same. He played in rotations, every third series at end and then he'd take a series from Lageman so we'd estimate he played around 40% of the snaps in the base but also was a nickel edge rusher with  Simmons 'sinking' to right tackle and Brackens would play right end. SOME of the time. Sometimes he'd be a "joker" as it is called now—a  linebacker/defensive lineman hybrid that stands up behind the defensive lineman and picks a gap to rush or can drop to a middle zone or to a hood/curl zone and play zone defense or even lock up on a running back. 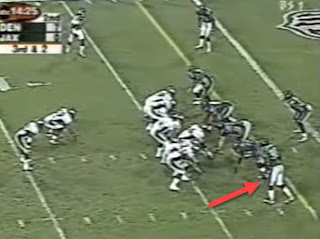 Brackens usually rushed, but if you watch the games he did plenty of coverage and made an impact while doing it. We cannot prove it but we'd guess that he was the NFL defensive lineman the dropped the most in zone blitzes due to the fact he could make plays doing it. Sure, it means for those plays he as out of the pass rush but like his teammate, Gary Walker said late in Brackens' career, "You can see that talent, he can play the run, he can rush the passer, he can drop into coverage and cover running backs and tight ends. He's the complete package". Those things applied early in his career as well.

In those first two years in that role be averaged 50 tackles, 9 stuffs, 7 sacks, 8 pass deflections, 5 forced fumbles, 2 fumbles recovered per season. There were a lot of starting defensive ends that didn't put up those kinds of numbers those two seasons. A lot.

Presumably, Tom Coughlin wanted more experience in his starters which is why in 1996 the right end was Clyde Simmons at left end was generally Jeff Lageman and that relegated Brackens to the rotational/nickel role we outlined.

Brackens forces a fumble, picks it up and celebrates before he scores  touchdown

Brackens attended the University of Texas where he was a three-time All-Conference selection and All-American at defensive end as a junior in 1995. He caused five fumbles in his final season, has 7 sacks, 16 tackles for loss, and 29 pressures. For his career, he was credited with 24 sacks, which ranked eighth among all Longhorn defenders at the time. 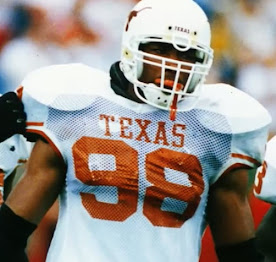 He was exceptionally strong (country strong if you will), bench pressing 440 pounds, and was timed in the forty in 4.71 seconds. He passed up his senior season to enter the NFL draft and predraft indicators told Team Brackends that he was going to be a high first-round pick. However, he fell to the top of round 2. Perhaps the broken leg he had early in his final season at Texas was part of the issue but it is still is a mystery to us why his stock dropped.

After those first two stellar seasons, Simmons was gone and Brackens stepped into the right end position and promptly got hurt missing for games. When healthy he was godo when he played

He rebounded in 1999 making Second-team All-Pro (First-team on Paul Zimmerman and Gordon Forbes' teams, however) and was a playmaking machine—forcing eight fumbles, defending eight passes, recording 12 sacks picking off a pair of passes, taking one to the house, and totaling 69 tackles.

Brackens gets behind and in the middle of a counter play-not easy to do
Brackens signed a six-year $40 contract (if all incentives were met) in August and though his numbers dipped in 2000 but in watching him he drew tons of attention from blockers and put a lot of pressure on the quarterback. Sometimes a player hits the ball hard and they just don't drop in for hits.
Brackens uses his strength to push a good tackle, Lomas Brown back

In 2001 he didn't play any better than in 2000 but he had better numbers but in our view he was the same player throughout.

2002, though, he had a serious injury—so serious that in the summer of 2003 there were rumors he might not ever play again. It took microfracture surgery to repair the joint—a complicated procedure that attempts to create scar tissue in the knee by drilling holes in it. The scar tissue acts as de fact cartilage.

Then, he had an emergency appendectomy that slowed him but he did play in 2003 but was not up to snuff, to use a country term.  He had reworked his contract that Summer as well to help the team's cap situation. He did lead the team in sacks with six, but as mentioned he was not the Tony Brackens of 1996-01. 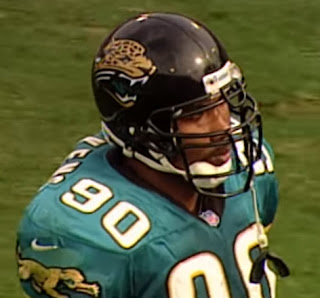 In the 2004 offseason, he was released for cap reasons but in July signed a one-year deal but was coming off of surgery on his right knee (the devastating injury was to his left knee). In August he was cut for good. He'd had suffered a strained back and missed significant time and his knees were "getting better" but still not 100%. of 90%.  Physically, he was done.

His coach Jack Del Rio said it was a "painful decision" to cut Brackens, knowing he'd been the heart and soul of the Jaguar defense for a long time.

Brackens hoped to have been signed by someone for the 2004 season but teams must have been wary of his wheels.

In his career Brackens averaged 45 tackles per 16 games, 8 sacks, 4 forced fumbles and 4 fumble recoveries and 7 passes defensed. Remarkable, his plaoff averages were similar with his per 16 game averages as follows:  48 tackes, 9 sacks, 5 FF, and 7 FR. We are aware ust four playoff gamescan skew an average but it does show Brackens did make plays in big games.

In watching him he used his strength to beat guys, he had good quickness off the ball and used a should slap and dip most. Sometimes the slap would get a little high and he's headslap a few guys.

He did have a tendency to deliver a blow to a tacker and not wrap up. Like Howie Long, he messed some tackles. Also, he'd sometimes give a "mush rush" not penetrating very far. We don't know if he was doing it by design, perhaps taking a breather or if he was sitting back and spying or waiting to deflect a pass, but a bit too often for our tastes he was on the line of scrimmage a bit too long.

In today's game he could have a huge role in a Bill Belichick-type defense where a guy stands up, puts a hand down, rushes, covers, in the Chandler Jones category when he was with the Patriots or Matt Judon, or like a Za'Darius Smith with the Packers, maybe.

Or in a 4-3 scheme he would be just as successful now as he was then, maybe like a Nick Bosa or a Danielle Hunter maybe not as fast but stronger than both of those but his production would be in that same range in our view.

He was a big-play guy, a sack, a pressure, a tackle for a loss, a forced fumble, falling on a ball, picking off a pass, deflecting a pass at the line of scrimmage or in a zone drop. He has natural strength enhanced by weight-lifting, he has excellent speed and quickness. And a knack for—impact plays.

After his career Brackens returned to where he came from—a Texas ranch where he learned values from his parents and where he is passing those traits to his own children.

Brackens was a man with values and had great value as a football player because "blue" players make "blue" plays as the scouting saying goes.