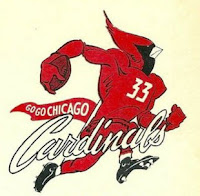 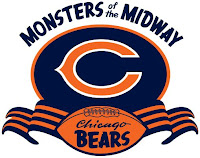 In its early years the company magazines, including well-known titles such as Popular Aviation, Radio News and science fiction-fantasy titles Amazing Stories and Fantastic Adventures. But in 1948 they published several sets of “little” how-to-play books covering such sports such as football, baseball, golf, and table tennis.

The Little Sports Library books measured 5 x 6.75 inches and were usually between 90-127 pages in length. In 1948 Ziff-Davis published both a hardcover and a paperback version with the hardcover costing $1.25 and the paperback 50 cents. Since Ziff-Davis was located in Chicago they stuck to the two NFL teams in the Windy City and their players to help write their little books. The four football titles consisted of: 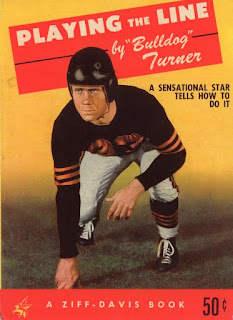 Playing the Line by Clyde “Bulldog” Turner, Chicago Bears center, was 123 pages in length, with 19 chapters and 37 photos by photographer Arthur Haug. Playing the Line also featured 8 diagrams of defensive fronts and how to block them. 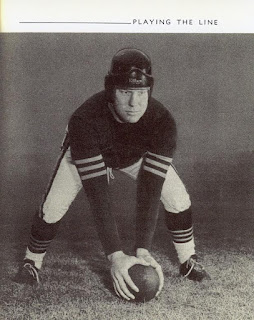 Turner demonstrates how to get into a proper stance and techniques on how to block defenders from all four different line positions- end, guard, tackle and center. In his Forward Turner tells a great story about his coach George Halas and how he knew that Turner was one of players on the team.

“Once in spring practice, Coach Halas was telling us about a particular way he wanted a tackle handled on a specific play. He offered $100 to any player who could tell him the five plays to throw at this tackle.


However, before I could open my mouth, Halas added, “with the exception of Sid Luckman and Bulldog Turner” This was a great boost my ego, although I was almost sorry he excluded me. I could have used that $100.” 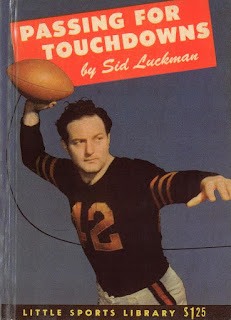 Passing for Touchdowns by Sid Luckman, the Bears All-Pro quarterback, was 127 pages with 14 chapters on passing and featured 30 photos. The demonstration photos, taken by Haug had Luckman on how to handle the snap; how to grip the football; the different type of passes; when to pass; pass receiving, as well as how to throw the football. 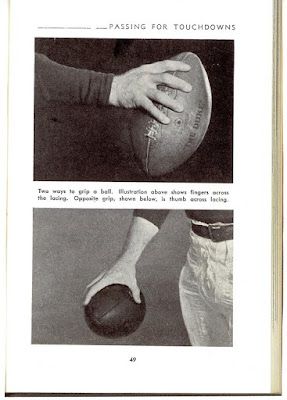 In the Pass Receiving section Haug shot several poses of Bears end Ed Sprinkle on how to catch-and-catching the football. 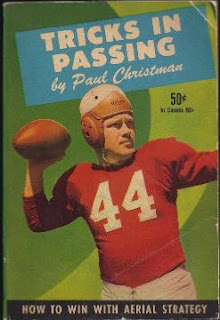 Tricks in Passing featured Chicago Cardinals quarterback Paul Christman, who had just guided the Cards to a victory in the 1947 NFL Championship Game. The third book in the series was 90 pages in length and featured Christman in 45 different photos (once again shot by Haug). 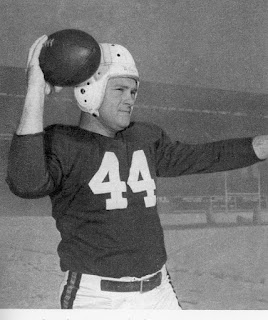 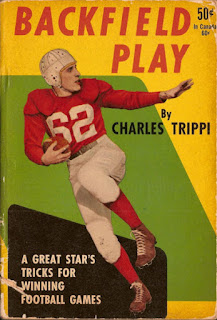 Three of the four players who helped write the books for Ziff-Davis ended up in the Pro Football Hall of Fame (Turner, Luckman, and Trippi), while Christman was twice named Second-team All-Pro by the UPI in 1946-1947 and later became an announcer for all three of the networks, and did color Super Bowl I for NBC.
Ziff-Davis Publishing didn’t publish any more football books and went on to produce mainly hobbyist magazines devoted to expensive, advertising-rich hobbies such as cars, photography and electronics. Some of their more recent titles included PC Magazine and Popular Electronics. They are still in business.


This four book set is a little tough to find but can be found on abebooks.com or Ebay for around twenty dollars apiece, although Amazon.com had the Luckman and Turner books listed for nearly fifty dollars each. The “little” books are definitely worth the price.
Posted by cdw83 at 12:48 PM