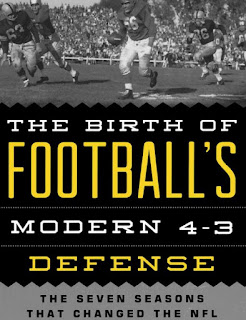 Learning a position that had never existed is sure going to be a challenge. NFL teams transitioned from the 5-2 defense to the 4-3 during the mid-fifties. Though the middle linebacker was a key to the change, it was not the only change. The "Men in the Middle" were the ones who got the lion's share of the publicity there were other elements. My book The Birth of Football's Modern 4-3 Defense: The Seven Seasons That Changed the NFL covers when each team converted and the key players in those scheme changes that, literally, affected the entire NFL.

Today, however, I felt it was important to detail some of the things the other linebackers, the outside 'backers did to contribute to the success of the 4-3 scheme.

Rather than use charts detailing alignments, and explaining the inherent responsibilities of the outside linebacker position; the simple explanation is as follows: a man must possess the strength and size to defeat blockers and take on running backs with size, while also being able to run well enough to "cover" backs used as receivers in either man to man or zone coverage. Finally, if quick enough, the outside linebacker could be sent as a pass rusher. Initially this was called a "red dog", yet for many years now it is simply known as a blitz.

For sake of discussion, let's say the ball is on the left hash mark. The right linebacker, most of will not have a aligned directly in front of him. The left linebacker has much more territory to cover, and many times would be faced with a blocking end directly in front of him. If the offense  a sweep to the wide side of the field, and as such the left linebacker must defeat the closed end's block, and "force" the sweep so the runner cannot get outside of him and gain big yardage.

Since the league was in transition, so was the teaching element. How do you teach a young man to play a position that never existed before? Many men attempted to play either one or both of the outside positions during this transitional time. 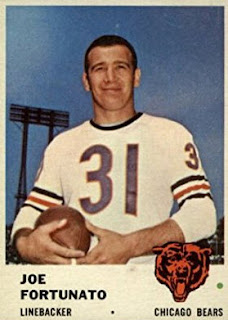 When his military service complete Joe Fortunato joined the Bears in 1955. He played rookie year as a fullback, and saw plenty of action at linebacker. A Clark Shaughnessy defense requires the ability to think on your feet since he asks so much of his linebackers. How so you ask?

Since the pass rush is the key element; linebackers will have large amounts of territory to cover. usually played on the right side, and was learning on the job with the help of teammate Bill George. Known as "The General" from Tom Bennett's fine book  The Pro Style: The Complete Guide to Understanding National Football League Strategy  George was a combination of middle guard pass rusher, and stand up 4-3 middle linebacker. 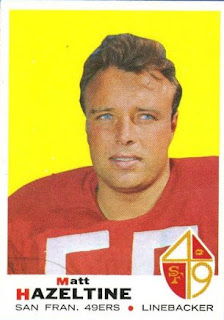 Matt Hazeltine had a storied career at the University of California-Berkeley, and the 49ers sure needed help on the defensive side of the ball during this era. Hazeltine played some on the left side, and some on the right side during his rookie year of 1955. Phil Bengston coached the San Francisco defense, and also used exotic alignments, and many times would send his linebackers on a "red dog".

Hazeltine, just like Fortunato, was learning on the job. Both men had new head coaches in 1956 and continued to improve as they quickly learned the nuances of the new position. contributed to the Bears winning the Western Conference in 1956, and Hazeltine down the stretch in 1957 was a major factor for the Niners in earning a playoff berth. The 1958 season finally brought some league-wide recognition for Fortunato as an All-Pro. 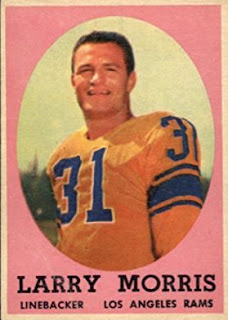 Hazeltine earned some All-Pro recognition in 1959 as a right linebacker. The Bears acquired talented but off-injured Larry Morris to play right linebacker, and as such Fortunato moved to left linebacker. He settled in quickly and began to demonstrate that he may actually be better at his new found post. The writers that selected the All-Pro and Pro Bowl teams had a penchant for choosing only middle linebackers, and virtually ignoring outside linebackers. In fact, sometimes the All-Pro Linebackers would be Joe Schmidt, Sam Huff, and Bill George.

Here are a couple of examples of how the All-Pro voting went in the late-1950s.

As can be seen, the Middle Linebackers have the First-teams locked up and the outside linebackers are the Second-team selections or honorable mentions. 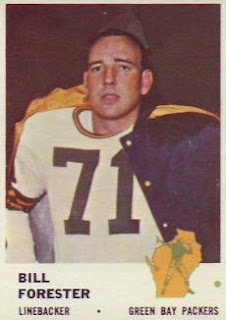 The one exception, as the Lombardi Packers began to dominate the Western Conference, was . He was truly the first right linebacker to excel in all facets of the position and was rightfully honored in the voting (coached by Bengston). was a veteran on the downside of his  while Hazeltine & Fortunato still had plenty of football left in them. 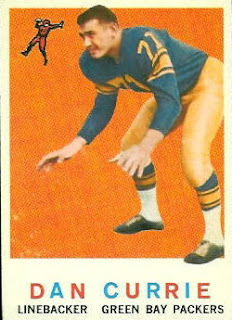 From 1961 through 1963 either Matt or Joe, and sometimes both would receive All-Pro recognition or a Pro Bowl berth. , finally, was voted First-team All-Pro as the George Allen defense of the Bears won a championship in 1963, and Fortunato called the defenses.

Defensive players came and went in San Francisco as Hazeltine labored on with a seemingly new cast each year. The 49ers had sunk to last place in 1963.

In January of 1965 and I was in the Coliseum in Los Angeles for the annual NFL Pro Bowl and was able to witness Fortunato and Hazeltime live. At that time the Pro Bowl game actually was played with a lot of fervor and both Fortunato and Hazeltine played very well for the winning Western Conference team. Experienced, savvy, and skilled would describe both men at this point in their careers and it was exciting for me, as a young man to witness their abilities. played through the 1966 campaign, then retired, while Hazeltine remained a fixture in the City by the Bay. His final year in San Francisco saw a quality defensive coach in Dick Nolan arrive.

A year away from the game and Matt realized he still had the desire to play. He lacked speed to play the position, yet his guile, and experience were assets his new team. The New York Football Giants were in contention for the first Wildcard berth in Hazeltine's final year in 1970. But they fell short. A young Fred Dryer has always contended that Hazeltime was his "Rock of Gibralter" that season, guiding him, teaching him and helping him maximize his abilities and covering for his errors.
So, though the post-season honors may be light for these outside or "corner" linebackers as they were sometimes called, their contributions to the new 4-3 defense should not be taken lightly. They were integral to the success and longevity of the 4-3 defense.

By this time if a linebacker coach was attempting to teach one of his young players, he could certainly put on game film of Joe Fortunato and Matt Hazeltine and have them take notes.