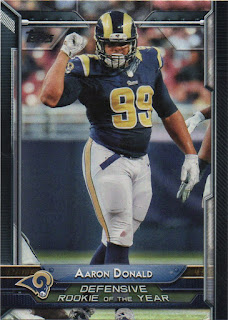 We have been documenting Aaron Donald's rise to the head of the NFL 3-technique list. Now, halfway through his third year, he is on pace for 10 sacks and 16 run/pass stuffs, which if he keeps pace would put him ahead of these other selected smaller 3-techniques in the latter category and 2.5 sacks behind Geno Atkins in the former.

This week, shade defensive tackle Michael Brockers called Donald, "a '290-pound bowling ball' with the strength of two men".  And Pro Football Focus has him rated (for the second season in a row) the top defender in the NFL and if he keeps up his 2016 pace he will be tops again this season.

As a rookie, he outpaced his peers, and in his second season, he also surpassed most of those peers in similar categories. As you can see on the third chart, he's not slowing down.

Here is the three-season total for these defensive tackles:

With eight games left to play in 2016 Donald already has more sacks and stuffs than any of these players.