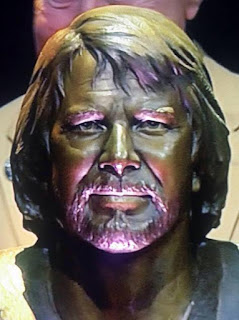 Apparently, it has been the Pro Football Hall of Fame policy to not give the personal items of a Hall of Fame Ring and Hall of Fame Gold Jacket to persons elected to the Hall of Fame after they have passed away.

And apparently, it is not sitting well with the Stabler family and some media and fans. Here are some of the titles of the articles from a Google search:

My question is what size would the ring and jacket be? What purpose would it serve?

The ring's purpose is for the HOF inductee to be able to wear it with pride for his personal achievement. The jacket is usually for the inductee to wear at  Hall of Fame functions but they often wear them to autograph signings and other things as well. The Hall of Fame would be better suited to describe when and where they prefer the HOF inductees to wear the gold jackets, but my understanding is they are preferred to be  saved for functions like the Merlin Olsen Luncheon, which takes place in the Super Bowl cities prior to the big game, and functions such as those.

So, if given to the Stabler family what function would they serve? Would someone wear that ring and jacket, if given? Would a framed wall hanging next to the already given replica of the HOF bust satisfy? Or maybe there will be a new lot to supplement this that includes a ring and jacket.

My second question is did the Len Ford family feel similarly, i.e. did they feel shorted? The Seau family? The Stanfel family? Any others? Maybe they did, maybe social media didn't pick up on those issues, but it has this time.

As one who follows the Hall of Fame and the process fairly closely, it seems there are, perhaps, a few things the HOF could do better but one would have to look awfully hard to find such things. From my observations, the Hall of Fame does a good job in how they treat the inductees and their families in terms of lodging, meals, and travel and many, many other items of a keepsake nature. Adding a jacket and ring that would not serve their intended purpose from jump street would add to that largesse.

So, greater minds than mine will make a decision regarding awarding rings and jackets to HOF players who passed before they were inducted, but the whole episode is very off-putting to me in that Stabler was voted into the Hall of Fame, the highest personal honor a player can receive in the NFL and it seems that the good will, efforts and hard work of the Hall of Fame that made that and the celebration afterwards is dismissed, in a reactionary way, by some in the media. The tone of the articles from the link above smack of the view that the Hall of Fame being less than sensitive to the Stabler family.

Trying to paint the Hall of Fame as insensitive or cheap (charges made by social media commenters) will not, in my view, pass muster. In over twenty years of seeing how  things work at the Hall of Fame, nothing could be further from the truth. It seems to me the replica of the Hall of Fame bust is the item that should be more than satisfactory. Most of them are done by master sculptor Blair Buswell and are a work of art, worthy of being an heirloom. Buswell and the other sculptors do a tremendous job for the Hall of Fame in creating the busts and perhaps folks would look into how renowned their work is. Perhaps if they did, they would realize this is a wonderful gift to have in their homes and will last generations.

However, if complaints (of the media) win the day, and these days they often do, the Hall of Fame will have to call their sponsors Kay Jewelers and Haggar Clothing and ask that they make some rings and jackets, but this time, off-the-rack will be fine.