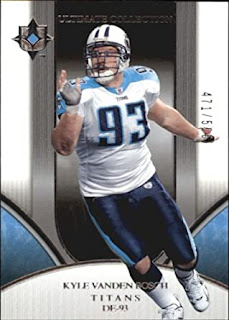 Kyle Vanden Bosch showed tons of promise when he was Arizona Cardinals—his work ethic and smarts were praised by his coaches and it seemed set he would be a star in the desert. He'd been everything the Cardinals hoped for when they took him in the second round of the 2001 NFL Draft and as a rookie, he earned a starting spot.
But his knees would just not cooperate.
His rookie season ended after three games when he tore the MCL in his right knee in practice during a routine drill. Two years later he had his right ACL go out on him during a preseason game. Again, he was out for the rest of the season.

Vanden Bosch had it all—strength, quickness, and smarts.
The strength? He was the University of Nebraska Lifter of the Year Finalist in 1999 and 2000 and did 26 reps of 225 pounds at the combine.
The quickness? He was time at 1.6 in the ten-yard dash and 4.66 in the forty and just dominated the drills. He did a 6.82 in the three-cone and had a 4.08 time in the short shuttle. When he left Nebraska he held the fifth-best Husker Performance Index for his position—a series of agility drills that measure athletic talent. He also left holding the school record in the "pro agility" run.
The smarts? He was a two-time Academic All-American and a three-time Big 12 All-American. He finished his degree early with a 3.8 GPA.
Vanden Bosch was brought in to help a pretty poor pass rush. In 2000 the Cardinals had just 25 sacks. In 2001 it fell to 19 with Kyle on the IR for the last 13 games. Frankly, it was still paltry in 2002 (again only 21 sacks) when he was back starting and led the team with just 3.5 sacks, one of the lowest team-leading numbers in recent memory.
The Cardinals sad-sack story continued in 2003, the year Vanden Bosch missed in full, with 21 sacks once again.
In his final year in with the Cardinals, Vanden Bosch was not a starter at right end—the Cards signed free agent Bertrand Berry to take his spot and he didn't disappoint—leading the pass rush with 14.5 sacks and took the pass rush out of the four-year doldrums.
That year, after being moved to back and from right end to left end in camp, Vanden Bosch's role became that of a nickel rusher ostensibly to protect his surgically repaired right knee by not playing on run downs. He said his knee was at maybe 75-80 percent that year so the move made sense. He only played about 25% of the defensive snaps and finished with zero sacks and ranked sixth on the team in pressures. Sixth.
It was not great production, to say the least.
Cardinal head coach Dennis Green had seen enough and had no interest in re-signing Vanden Bosch—it was time to move on. Fortunately, the coach who drafted him, Dave McGinnis, helped him get a reprieve by advocating for him to Titans head coach Jeff Fisher. McGinnis was Fisher's assistant head coach and linebackers coach and loved Vanden Bosch's work ethic. Fisher and the Titans gave Vanden Bosch a one-year "prove it" deal for the vet minimum with the hopes the knee was close to 100 percent and he could reach his potential in Nashville.
Vanden Bosch proved his old coach right by playing where he was asked (he moved to left end) and by having a healthy year and a career year at that. He was the Comeback Player of the Year and was voted to the Pro Bowl. He led the team with 12.5 sacks and was second in quarterback pressures and forced four fumbles.
That production earned him a long-term deal—four years, $22 million with two-thirds of it guaranteed. The deal kept him off the free agent market where he might have gotten more money but his loyalty to the club that gave him a chance and whose scheme he knew and whose organization, from GM Floyd Reese down to his position coach, loved his game was a major factor in not testing the market.
Vanden Bosch had built a reputation as one of those relentless pass rushers, a high-motor guy but to his line coach John Washburn said he was more than that telling the papers, "He's a lot more than a try-hard guy. He's quick and can run and is good with his hands. He's a lot more than advertised."
Years later Washburn told a Nashville radio station, 104.5 The Zone, that, "There’s nobody like him…he’s special. This guy was different." He explained that "no one was more dedicated than this guy."
Though his sack number dropped in 2006 his pressure didn't. Both Football Outsiders and Pro Football Focus reported that he led the NFL in pressures, though with different totals. The next year (now back at right end) the NFL's official statistics (via NFLGSIS) had him leading the NFL in quarterback hits as he again went to the Pro Bowl and had 12.0 sacks and forced four fumbles.
His production dropped off the next two seasons (he was slowed by a groin injury in 2008) and with the Titans not interested in him—they made no attempt to keep and it was off to free agency. The Lions signed him to a four-year $26 million deal and in addition to bolstering the pass rush, he was also expected for him the elder statesman on a young defensive line that featured two youngsters—rookie Ndamukong Suh and 24-year-old Cliff Avril.
The Lions head coach Jim Schwartz was the Titans defensive coordinator for four years and was part of the Vanden Bosch fan club like Dave McGinnis and John Washburn. Schwartz, despite the couple of off-years, still trusted Vanden Bosch and told Dave Birkett of the Detroit Free Press, "We knew how important it was...to get a player like that. Those guys don't come along that often."
Schwartz also told the media that he'd done his due diligence, evaluated film, and came to the conclusion that Vanden Bosch was still a premium pass rusher and that he also brought intangibles to the table like leadership and his unmatched work ethic. All that was to rub off on the youngsters on the defense.
His performance in Detroit was mixed. He did what he was asked to do in terms of leadership and the Lions improved their record in both 2010 and 2011 (going 10-6 and going to the playoffs). But in terms of personnel production, it was okay but it just wasn't spectacular.

His first season with the Lions he got hurt—this time a building disc in his neck, and finished with just four sacks and the pressures were not there as they had been in the past—about half as many. His best season in the Motor City was 2011, a year he was held out of practice one day a week to keep him healthy. He had eight sacks, forced four fumbles, and upped his pressures but it was his last good year. His final season didn't show much and he was a cap casualty early in 2003.
It was an excellent career for someone who had four knee surgeries in his first four seasons. He is still known as perhaps the gold standard of hustle-type players. In practice, he would always sprint to the ball carrier and at least touch him, even if the play went the other way. He just wanted to be in the habit of getting his hands into every play.
He went to the Pro Bowl twice, was All-AFC in 2007, and when healthy put unrelenting pressure on quarterbacks. It's a career to keep in our memory banks.
Career stats— 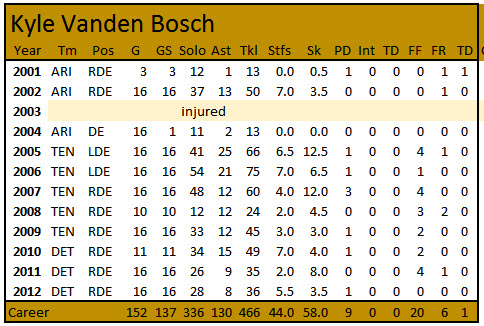