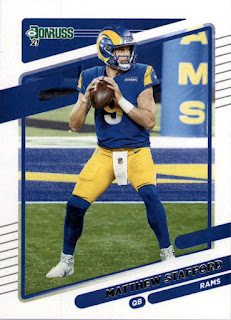 Elite arm? Check.
Elite toughness? Check.
Elite no-look passed? Check
Matthew Safford has always had the goods—he has MVP talent. As everyone knows he was in a poor situation in Detroit and was not always able to get the results you may expect from his skill set.
Then came the monster trade to the Rams, a perennial playoff team since head coach Sean McVay arrived in 2017. They had talent on both sides of the ball and in McVay one of the best and most innovative coaches in the NFL. The trade worked out big-time with the Rams winning the Super Bowl and Stafford getting his ring.
The Rams are most certainly able to repeat as Super Bowl champions but in a competitive league, odds are against it as they are for all the teams, even the very good ones. On the flip side, they have as good a chance to win the big game in Glendale, Arizona, next February as anyone—The Bills, Chiefs, Packers, et al.
With all that it would seem Stafford is poised to take the next step—contending for the Most Valuable Player award. He was in the conversation during the first half of last year
Last year for the first eight weeks Stafford was putting up MVP numbers—The Rams were 7-1 and he'd completed  68.9 percent of his passes for an average of 309.6 yards a game and tossed 22 touchdowns to just four picks. He's only been sacked seven times and had a passer rating of 108.0.
Then things changed.
Perhaps nagging injuries, perhaps playing the tougher half of their schedule but it was clear that Stafford's personal performance nosedived, even though he was able to keep the Rams winning.
The final half (nine games) of the season had a stat line of 267.7 yards passing a game, 19 touchdowns and 13 interceptions (which vaulted him to the top of the NFL in that category), a 90.4 passer rating (right at the league average) and he was taken down by pass rushers 23 times.
And little of the mediocre quarterbacking was attributable to the offensive line or poor receivers. The line was good and the receivers were more than good, in fact, as good a set as any quarterback could want.
Stafford just didn't play well and at times tried to try to do too much and would make some pretty big negative plays like pick sixes, a category that he led the NFL. (He also led or tied for the lead in 2020 and before that 2009 and 2012).

Whatever the reason and no matter who was to blame for them but they are simply something that has been part of Stafford's resume for a long time. He's now the NFL's active leader in interceptions returned for touchdowns, and no one is with eight of his career total of 27.
Of course, not all those interceptions returned for scores were Stafford's fault, maybe a bad route or some other miscommunication contributed mightily. But, some were on him when he played "hero ball"—rather than taking a sack he'd attempt passes when a play was for all intents and purposes over. He'd be close to in the grasp of a defender and he'd attempt a pass and that led to at least some of those poor throws that were taken to the house or put the opponent deep inside the Rams territory.
During his late-season slump, he appeared at times to be trying to make a stunning play like Patrick Mahomes or like Brett Favre used to do, but without the knack for making something out of nothing like Mahomes, Favre, and the others that seemingly did that routinely. Like anything it's a skill, a talent and some have it, some don't. Stafford is about in the middle, plant of times it has worked in his career and may times it failed.
Regardless, by Week 10 he was out of the MVP mix and then went down from there.
Then came the playoffs and a reprieve. Not for MVP but to prove his mettle as a championship quarterback.
And he did it. Stafford is the owner of a Super Bowl ring.
In the 2021 playoffs, the Rams defense was excellent and their pass-happy coach (run percentage 39.7 in the regular season) changed things up and stuck to the run game more than he had all season. Rams fans will tell you that too often when a running back got stuffed a few times in a row McVay would abandon the running game altogether.
In the playoffs that didn't happen.
Against the Cardinals, McVay called 38 run plays to 19 pass plays—66.7 percent. It was like he'd been channeling Chuck Noll or "Ground" Chuck Knox. The following week versus the Bucs the Rans ran the ball 30 times even though it netted just 73 yards—but McVay stuck with it.
True, it's just a correlation, not causation but whatever the reason the Rams ran the ball more consistently and they won doing it. Using the eye test it very much seemed that the offense worked better when it was more balanced vis-à-vis the run versus pass ratio. While analytics people will scream but sometimes a running game can contribute to a win, even in this era. And it was clear McVay was committed to his game plan.
The run-pass ratio tailed off after that somewhat but the NFC Championship Championship game was a fight for their lives as was the Super Bowl. So when it was needed the passing game took it home.
Still, for the playoffs, McVay called 44.6 percent running plays. Clearly, McVay throttled down the pass-crazy tendencies and it likely took the pressure off Stafford and likely snapped him out of the tendencies he showed during the second half of the season.
How did this affect Stafford? Positively when watching him and that was reflected in his numbers. No more "hero ball". He simply played better.
With a solid running game, Stafford still made great passes, no-look, deep strikes than won games, and in that structure, his numbers were again MVP-esque. He had a passer rating of 108.3, completed 70 percent of his passes and threw nine touchdowns to three picks.
How does this relate to 2022?
Simple. Stafford does not need, necessarily, to duplicate 17 games of the kind of production he had in the first half of 2021. If the Rams can stick to something more akin to the playoff formula he might not feel the need to play make extremely off-schedule throws and therefore avoid the kind of slump he had in the second half of the season.
The talent has always been there. Now the template is there and if followed Stafford could very well put up a full season of MVP-type numbers.
Sure, not unlike the Rams repeating there will be great competition for the MVP—Mahomes, Aaron Rogers (going for his third straight), maybe a Justin Herbert or a Lamar Jackson (who has one under his belt) but given the Super Bowl win and the style in which it was won Stafford could keep himself in the conversation for the NFL's ultimate personal award.
Posted by John Turney at 6:19 PM