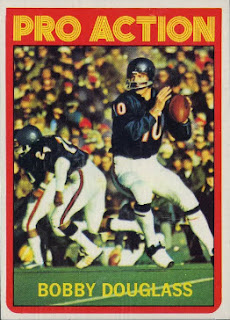 While checking out some things online we came across this piece by Sports Illustrated.com's  Bear reporter Daniel Chavkin— 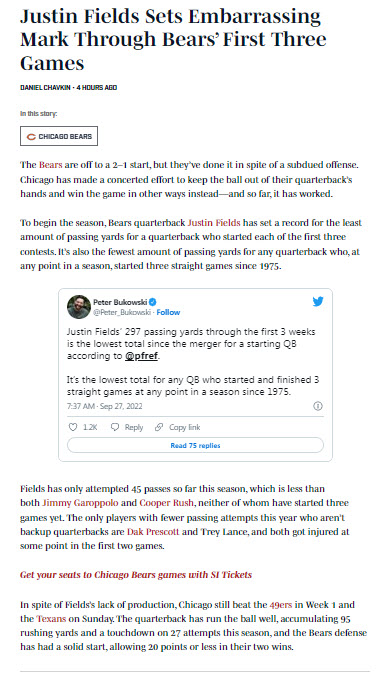 The article seems to be based on this Tweet—

Peter Bukowski
@Peter_Bukowski
Justin Fields’ 297 passing yards through the first 3 weeks is the lowest total since the merger for a starting QB according to
@pfref
.
*******************************
Well, not so fast. Without much hesitation, we knew that couldn't be accurate. Our memory banks recalled another Bears quarterback that had trouble moving the ball through the air. So we were pretty confident that the Bears current quarterback Justin Fields could not possibly hold the "Embarrassing Mark."
So to be sure, we did look it up just in case we had a faulty memory and also if we misread the article and Tweet.
We were right.
In 1972, which is, of course, after the merger, Bobby Douglass was the starting quarterback for the Bears. That year, he started all 14 games and rushed for 968 yards but threw for 1,246, completing just 37.9 percent of his pass attempts.
These are dreadful passing numbers, even for the so-called "dead ball era" in pro football—often defined by researchers as the period from 1970 through 1977.
So, going to the weekly totals, in Week One, Douglass threw for 73 yards. The following week he had 52 passing yards and in the third week, his passing yard total was 89 yards.
That is a combined 214 passing yards in those three weeks. In that span, Douglass completed 15 passes in 43 attempts and three touchdowns, and five picks. His passer rating (though it was a year before it was introduced by the NFL) was 35.6.
But remember this:  Douglass ran for 247 yards in the first three weeks that season, 33 more yards than he passed for. Hey, you gotta move the chains anyway you can.
Of course, that does not change the fact that for this day and age 297 yards is not what one would call prolific, but even though "quarterback wins" are not a statistic—give the kid a break—the Bears are 2-1.
Douglass' Bears were 0-2-1 after three weeks.
Bill Belichick's quote seems to make the perfect point, "Statistics are for losers. Final scores are for winners."
Here is the second part of Peter Bukowski's Tweet—

We have no reason to doubt it, so one out of two ain't bad. We suspect, though we have not checked, that the search engine at Pro Football Reference somehow skipped over Douglass' performance in the first three weeks of 1972. Sometimes that happens. It is not big deal, we are not criticizing Mr. Bukowski, we do and will make mistakes so we are not above reproach and don't expect others to be, either.
It's just that something was triggered in the old brain cells so we took the opportunity to remind folks of one of the more unique quarterbacks of the 1970s—Robert Gilchrist Douglass, University of Kansas, someone you didn't want to tackle.
Update: As per Mike Sando of The Athletic, he ran the search engine at Stathead and found 27 others in addition to Douglass. We didn't remember any of those. 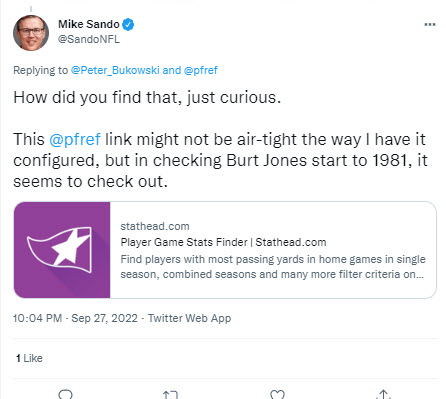 However, upon further inspection shows that most of those didn't play the whole game like Douglass did. So, for apples-to-apples comparisons, that should be considered.
Posted by John Turney at 6:12 PM