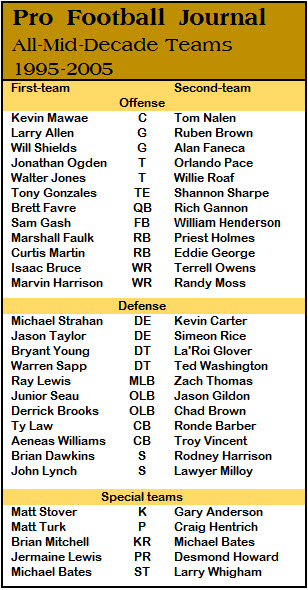 Here is the reasoning behind the selections. You may or may not agree.

Warren Sapp was Second-team All-Decade for the 1990s. He didn't deserve it, for one, he only played five years in the decade and the first two seasons were not stellar. However, here he is right in his prime and deserves a First-team selection along with Bryant Young. Ditto Strahan (who didn't warrant first-ballot in HOF voting because he wasn't a two-time All-Decade choice and Sapp was). Well, Strahan was in his prime from mid-1990s to the mid-2000s.

Simeon Rice feels he is a HOFer and in this decade, he was as good a blindside rusher as there was. Kevin Carter had great seasons, though he was a little up and down. According to one scouting firm, he was excellent for a few years prior to his 1999 All-Pro season and was a "blue" rusher for the Titans and Dolphins when he reduced to defensive tackle. So very close, though was Robert Porcher but he just didn't have any First-team All-Pro selections but he was at that level but others always edged him out. It was a good 10 years for edge rushers.

L'Roi Glover was the poor man's three-technique for this mid-decade and Ted Washington was the shade technique of this All-Decade team.

Ray Lewis was a no-brainer, two-time NFL Defensive Player of the Year and all the  credentials, Zack Thomas was next in the line of MLBers. and Brooks were the every-down backers and in a decade where the 3-4 defense was less common, Gildon and Brown were the best pass rusher, though their sack totals were less than 80. Other decades previously had over 100 sacks for several rushbackers.

Law and Williams were the top CBs, Deion Sanders retired, taking him out of the mix even though he came back as a nickel for the Ravens. Dawkins was the best safety with Lynch next/

We checked the stats and honors for the kicker and punters and these are the tops. and Hentrich the best placement punters, though you might find a couple with higher gross averages. The returners were the ones who could take it back all the way most often.

We realize Peyton Manning has a case for being here, but we went with Gannon, who was really excellent in this 10-year period, gaining lots of All-NFL and Player of the Year awards, Favre was an for First-team.

The fullbacks were based primarily on awards and long-term service. Fred Beasley was an honorable mention as a fullback. Marshall Faulk is an All-time great and this was his best 'decade'.

The same goes for the receivers and tight ends. There was stiff competition for those spots. Jimmy Smith was hard to leave off, but the others were just slightly ahead in our criteria. We tried to decide what happened in those decades, based on honors, statistics, post-season success, key games, signature plays, and testimonials. Testimonials are the comments made about other players by other players and coaches. Ike Bruce was the "When , he's hell". And his touchdown to win was key.

Marvin Harrison had the most TDs (110) from 96-05 he's also first in catches and yards and was a six-time All-Pro. T.O. did most of his damage as a player so he takes a Second-team slot. Tim Brown, always a Steady Eddy.  excellent, but his "impact" just didn't seem as strong as the top two. The impact of Randy Moss got him on the Second-team over Brown who is an honorable mention.

Tony Boselli was a great tackle, and this was the decade that he played all of his football, but can him over Roaf be justified? Maybe. Over the three in front of ? No. Larry Allen was a Second-team All-Decade guard for the 1990s and 2000s. However, when you go from 1995-2005 he is the best guard by far. Shields, Faneca, and Brown are very close, but none were the menace to defensive linemen and linebackers that Allen was in his prime. and Nalen were fairly easy.

If we were to pick one returner for both kicks and punts it would be Tamarick Vanover. He's an honorable mention for both punt- and kick returns. Darren Bennett is an honorable mention as a punter as is Jeff Feagles and Chris Gardocki. Matt Turk had the best net average for this period (37.6) and Craig Hentrich was second at 37.0 with Bennett third at 36.9.

We don't feel that our selections are better than anyone else's. We hope that the AP, HOF, and PFWA will task their voters to pick their own mid-decade teams. We suppose that is a long shot, but feel strongly that it would be a worthwhile endeavor.

Agree or disagree? Post below to let us know our mistakes.
Posted by John Turney at 2:47 AM