"You couldn't help but see it. Every book he ever got out of the library was a book about a quarterback. He was always reading something like 'The Sid Luckman Story.' All he wanted was football." - Shirley Unitas, his younger sister
On May 7th this week Johnny Unitas would've celebrated his 83rd birthday. So all this week in celebration of Number 19's birthday Pro Football Journal will look back at the career and legacy of Johnny Unitas. PFJ will look at books, magazines, stats, honors, Pro Bowls, and more.
To kick off Johnny Unitas week PFJ will take a look at the collective works written about Johnny U. We will focus on volumes that were specifically written about Unitas, not books like Greatest Quarterbacks, where he only has a small chapter. In all there are 13 books, adult and young readers, on Unitas. In chronological order: 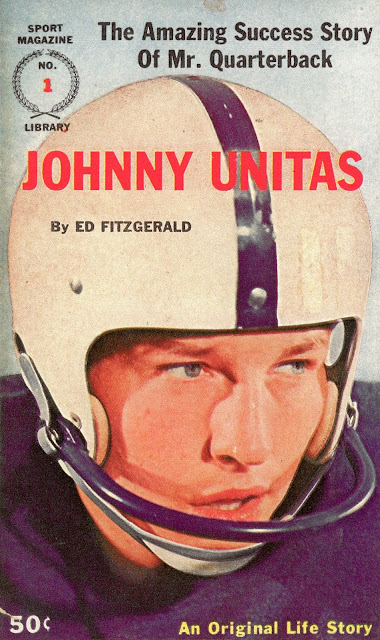 The book was released in paperback by Bartholomew House, Inc. sold for 50 cents. The cover features a beautiful color close-up photo Ozzie Sweet, whose color photos were featured consistently in Sport magazine. Johnny Unitas: The Amazing Success Story of Mr. was 160 pages in length and had 13 chapters of how Unitas rose from the sandlots of Pittsburgh to becoming the best quarterback in the NFL.

Published as book number 1 in the Sport magazine series, this book reads like a full-length magazine article. One of the key things about this first attempt at telling is the relationship that eventually builds between Fitzgerald and Unitas.

This version was released two years later in hardcover. 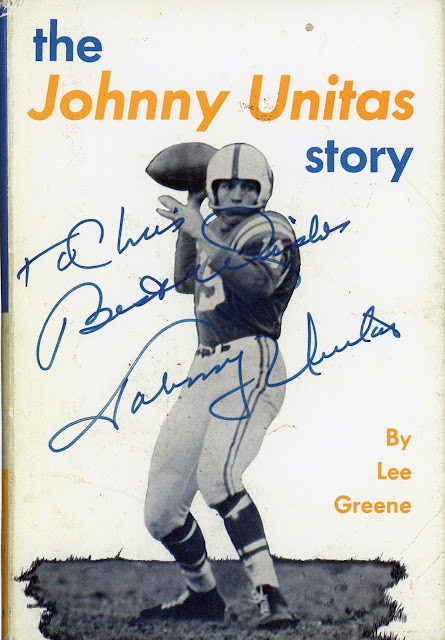 Two years after Fitzgerald’s book, the Johnny Unitas story by Lee Greene is published by G.P. Putnam’s Sons. Greene was a free-lance writer from New York who had written for Sport magazine, Saga and Boy’s Life. The Johnny Unitas Story was 183 pages long, had 15 chapters and featured 18 photos, some very good. The cover photo shows Unitas in action, arm cocked, looking down field. This photo was taken by Marvin Newman, a well-known sports photographer whose images were in Sport and Look magazine for years. Early photos of Unitas with his mother, his high school coach Jim Carey, and at Louisville are very revealing images of a younger Unitas. Greene a solid effort telling , up to that point of his career. 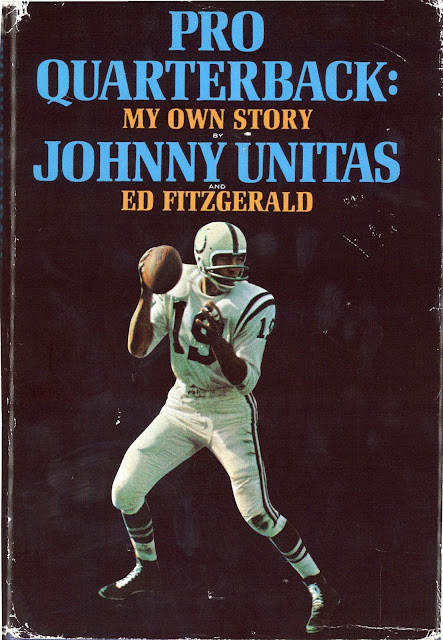 In 1965 Johnny Unitas put his name on a book for the first time- teaming up with Ed Fitzgerald. Because of Fitzgerald’s early volume it made sense for publisher Simon and Schuster to team the pair up.

Pro Quarterback: My Own Story tells the rag-story-riches story of Unitas in his own words. Published in 1965 for the price of $4.50 Pro Quarterback was 188 pages long and had 12 chapters, along with a photo spread in the middle with 14 images. The cover photo was shot by Robert Riger and features Unitas ready to pass. Pro Quarterback is very readable and highly recommended. Some of stories are in Chapter 5 as Unitas talks about the 1958 NFL Championship Game against the Giants, as he describes the 13 plays in overtime that led to the game winning touchdown. In Chapter 8 Unitas gives interesting thoughts on teammates Gene "Big Daddy" Lipscomb and Raymond Berry. The book is dedicated to his wife, Dorothy and baby girl Libby. The twelfth chapter, an , was written by Dorothy Unitas herself. Tells stories of her husband.
were positive. Library Journal wrote “Enjoyable reading for football fans.”
Paperback and small hardcover books were released in 1969 and 1969 by Tempo Books, a division of Grosset & Dunlap. The paperbacks pretty much had the same material and the same action photo on the cover and sold for 75 cents.

Number 4: “Playing Football to Win: By the Game’s Greatest Quarterback”  by John Unitas with Harold Rosenthal (1968) 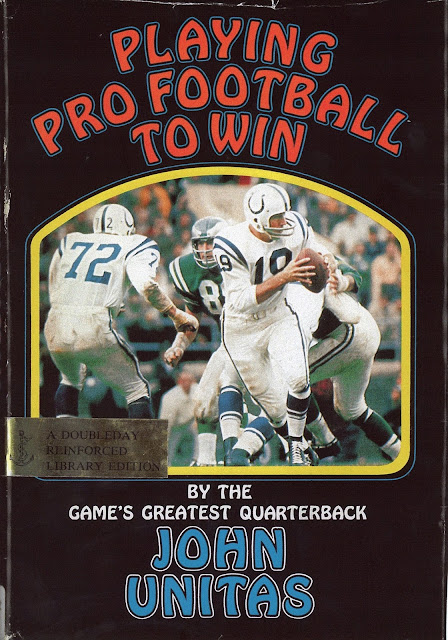 In 1968 Unitas went a different route in publishing. This time instead of telling his story he helped write a book on the position of quarterback and what winning is. Teaming up with Harold Rosenthal, Playing Pro Football to Win is a volume the position and what it takes to be a champion.

Rosenthal had begun covering football in the 1930’s with the New York Herald-Tribune, a post he kept until 1966. Rosenthal had written a few baseball books and was currently the editorial director of Maco Publications’ football magazines, Sports All-Stars Football and All-Pro Football.

A respected football writer Rosenthal does most of the heavy work here. Most of the short chapters cover great performances from certain games (Y.A. Tittle, Raymond Berry, Bobby Layne, Cookie Gilchrist). Mostly moments that involve “winning.” Within some of the short game recaps are diagrams of key plays, including the trap play Unitas called in overtime of the 1958 NFL Championship Game. 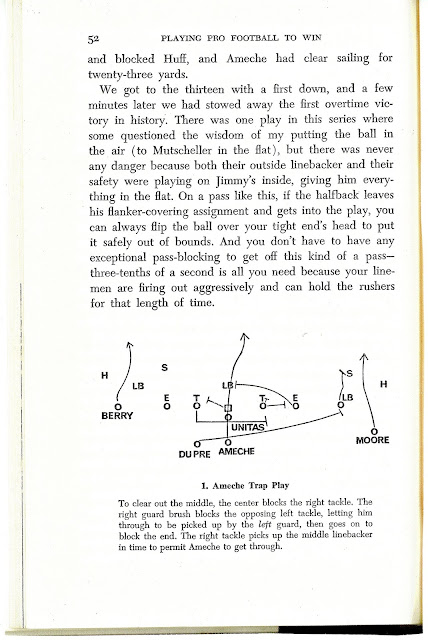 The book features a by Colts owner Carroll Rosenbloom.
“No player in pro football has ever been held in higher regard by his teammates. They have always been aware of his intense desire to win, but always as a team player. He has consistently put this ahead of all thoughts of personal records and achievements. Rightly, they look to Johnny Unitas as their team leader.”
The book was updated in paperback in 1970 (Signet) and in 1971 (New American Library) for 95 cents.
Number 5:  “Johnny Unitas”  by Joel Cohen (1971) 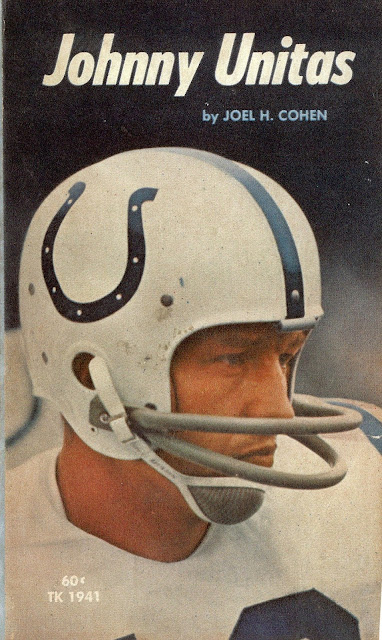 Johnny Unitas written in 1971 by Joel Cohen was published by Scholastic Book Services. Cohen had written a few other short sports biographical books for Scholastic on Lew Alcindor and Hank Aaron. Unitas book just 128 pages in length, had 15 chapters and 11 photos. It was only published in paperback and sold for 60 cents.

The paperback was geared mainly for young readers.

On page 17 two photos of note, one shows Unitas as a boy hugging his favorite dog and the other in his high school uniform (wearing number 18) without his helmet showing off a thicker crew cut, but wearing his trademark high tops.

The cover photo was taken by Tony Tomsic, whose work was regularly seen in Sports Illustrated and who would go on to photos the first 48 Super Bowls, missing number 49 because of health issues. returned this past season and shot photos for Super Bowl 50 in Santa Clara.
Numbers 6-7:  “Johnny Unitas and the Long Pass”  by Julian May (1972); “Johnny Unitas” by Charles and Ann Moore (1974) 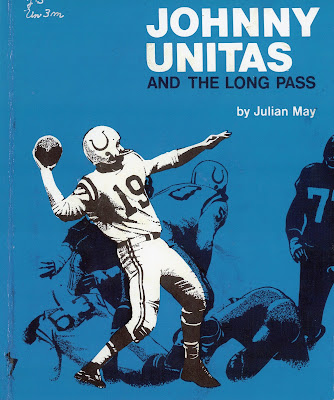 Another book written for young readers Johnny Unitas and the Long Pass by Julian May just 48 pages long. It does have 35 photos and was published by Crestwood House in 1972.

The second young readers book is Johnny Unitas by Charles and Ann Moore and published by American Street.  feature of this volume (31 pages), is this is the only book with a cover photo that features Unitas in a Chargers uniform as the book was released the year after he had retired. 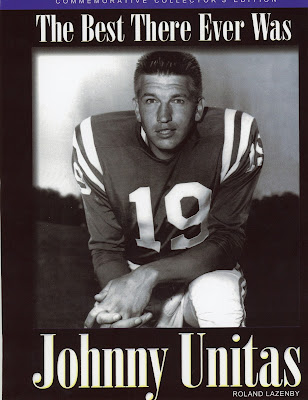 Shortly after Johnny Unitas passed away on September 11, 2002 Johnny Unitas: The Best There Ever Was, by well-known sports author Roland Lazenby, was released. A short pictorial (48 pages long) the book features 19 photos and a short biography of Unitas’s achievements and life.

Published by Triumph Books this volume sold for $12.95. 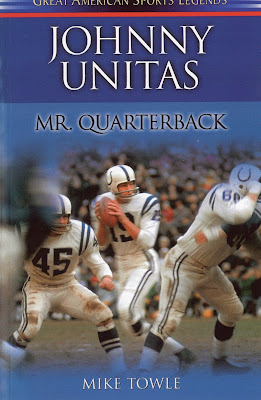 Just a year after his death Johnny Unitas: Mr. Quarterback by Mike Towle is published by Cumberland House. Over 220 pages in length this volume is packed full of interview quotes by friends, family, former teammates, etc. their thoughts about Unitas. More of an oral history than biography.

Towle was a former sportswriter with The National (daily sports newspaper) and the Fort Worth Star-Telegram. He had started a working relationship with Cumberland House penning other books titled, I Remember Walter Payton and Pete Rose: Baseball’s Charlie Hustle. 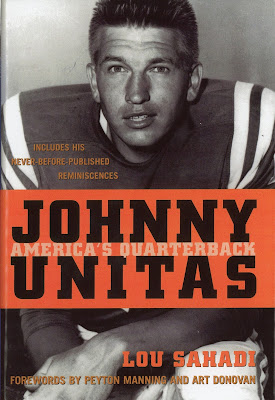 After the 2002 short pictorial book Triumph Books went back to the Unitas well with Johnny Unitas: America’s Quarterback written by veteran football author Lou Sahadi. Published in 2004 the 343 page hardcover book features 20 chapters written by Sahadi, who had written previous books on Len Dawson, Hank Stram and Don Shula.
The book features Forwards by Art Donovan and Peyton Manning. volume has plenty of football, as he covered most of Unitas' career during his time as a writer and publisher in the 1960's and 1970's. One of the features in this book a never published interview with Unitas by Sahadi done on October 3, 1988. The whole 37-page interview is featured in the back of the book. 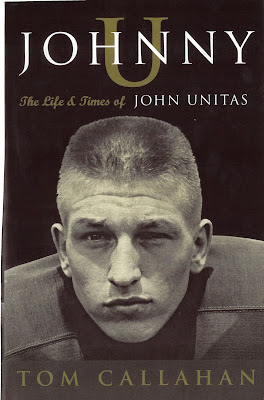 The definitive biography (so far) ever written about Johnny Unitas was published in 2006 by Crown Publishers. Johnny U: The Life & Times of John Unitas by Tom Callahan is a research, well-written volume on Johnny U. Callahan, a former senior writer at Time magazine and sports columnist at the Washington Post had written three previous books, including one on Tiger Woods, before tackling Unitas.
In Johnny U, Callahan brings to life, as well as the story of the Baltimore Colts in the 1950’s and 1960’s. The 292 page book tells numerous stories of those great Colts teams through hundreds of hours of interviews of former Colts players, opponents, friends and family. Johnny U is the one book I would recommend if you wanted to read just one book on the Hall of Fame great.
In the photo spread in the middle are very unique images, include Unitas as a baby being held by his mother and a photo of him in his football uniform with his arms around his sister Shirley, who is wearing her cheerleading outfit.

A children’s book written by Mike Leonetti, In the Pocket: Johnny Unitas & Me was illustrated by Chris O’Leary.

32 pages in length the book was geared towards kids ages Pre-7.

Leonetti was inspired to write the book by William Gildea book The Colts Belonged to Baltimore. 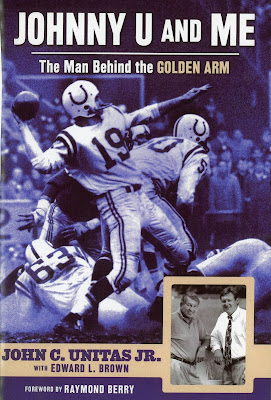 The most recent volume on this list was published in 2014 by Triumph Books (third book from Triumph on this list). Written by , John. Unitas, Jr. the help of Edward Brown, Johnny U and Me is a son’s memoir his famous father. You get some insight on the family dynamic of Unitas's two marriages from the eldest son, but you get his football life covered as well. 352 pages long and 25 chapters the book sold for $25.95 two years ago and has a by Raymond Berry.
Like I mentioned before if I had to choose one book on Unitas to read it would be Johnny U by Tom Callahan. A close second, and definitely worth the read, is Unitas’s own Pro Quarterback: My Own Story.