LOOKING BACK
By Chris Willis, NFL Films
So far during Johnny Unitas Week Pro Football Journal has already looked at Sport magazine and Sports Illustrated. Now will take a look some of the other publications that featured number 19. As one of the marquee names of the NFL at the end of the 1950’s and throughout the 1960’s Johnny Unitas made his fair share of pro football annuals and monthly publications. Below are some of the best ones.

1959- Pro Football (Dell Sports Magazine)
Cover Photo: Bath & Weiner from Frank Gillon
Article: “Baltimore’s Great Hesitator”
Dell Sports profiles Unitas in a 4-page article with a few photos. The magazine calls Unitas "The Great Hesitator," because he gets so often with his "nonchalance and his willingness to wait until the last split-second before delivering the ball." After just two plus years as starting quarterback with the Colts when the article was written Unitas talks about still learning the game. "You make it or fail on the ability to spot things. That's the whole story. Telling the difference between a zone and man-to-man pass defense, for example, isn't easy when you come out of the huddle. Anyway, I'm not satisfied with the way I do it. There is still plenty I can learn."

Cover Photo- Neil Leifer
Article- “A Johnny Unitas Album”
A pictorial that features 15 photos including one of him with his family, receiving an award with Colts owner Carroll Rosenbloom and coach Weeb Ewbank, and one of him playing basketball on the Colts traveling team (trying to block a shot wearing jersey number 19). 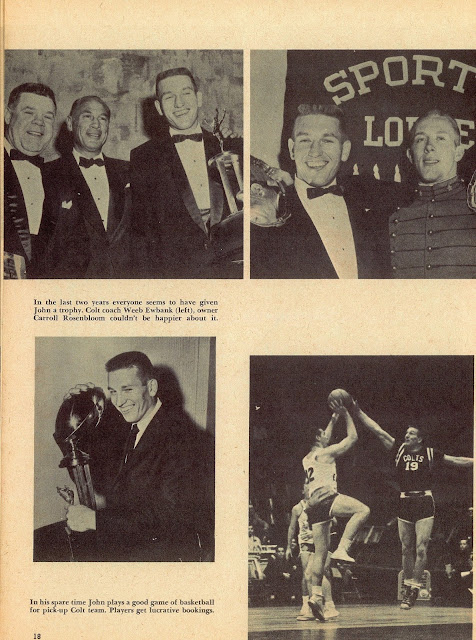 1963- Paul Hornung’s Football Magazine (H.S. Publications)
Cover Photo:
Article: “Johny Unitas: He Knows How to Survive to Win” by Gregg Sinclair
Paul Hornung allowed his name to be used on this magazine and was given a Senior Editor credit. Gregg Sinclair writes a 4-page article on talks about how he has survived in the NFL.

1964- All Pro 1964 Football (Maco Magazine Corp)
Cover Photo: Ken Regan
Article: “Two Minutes to Go” by Johnny Unitas
The 1964 All Pro 1964 Football magazine published by Maco features one of the best action photos of Unitas to appear on a cover of any publication. Shot by Ken Regan the image shows the focus of Unitas as he reads the defense and drops back to pass. One of my favorite images of Unitas.

In an article written by Unitas himself (with help from editor Harold Rosenthal of the New York Herald-Tribune), the great three pages of his personal philosophy what it takes to run a 2-minute offense. "All National Football League teams practice 'two minutes to go' situations. The Colts do this once a week for 20 minutes in a simulated scrimmage. There is, therefore, no -skeltering on the field when the situation arises. We are all on the same page, so to speak."

1965-66- Sport Heroes
Cover Photo- artwork by Vic Mikus
Article- “Unitas: Key to Baltimore’s Success” by Cooper Rollow
Artist Vic Mikus does a portrait of Unitas for the cover of the 1965-1966 Sport Heroes magazine. After losing the 1964 NFL Championship to the Cleveland Browns, Cooper Rollow’s article discusses what the Colts and Unitas are doing to get back to the title game. But the best quote in the article comes from Unitas's wife Dorothy. "He hasn't changed a bit since I first met him in high school. He wore a size 7 and one-eighth helmet then, and he still does."


1966 Inside Football (published by Sport magazine)


Article: "Why Unitas is the Best Ever" by Steve Singer


Although the title of the article is "Why Unitas is the Best Ever", inside is just one page written by Steve Singer (Associate Editor of Sport) about the actual claim. "He leads through his actions. He even blocks and tackles," said Don Shula in the article. "He never gets ruffled and I've never seen him excited. Of course, he lets you know if you break down."

Number 12:
Fall 1967 Pro Football Illustrated
Cover Photos: Unitas by Vernon Biever; Namath by Barton Silverman
Article: "Johnny Unitas: Gamble or Die" by Murray Olderman
Inside the 1967 Pro Football Illustrated is an excerpt of the Unitas' chapter in Murray Olderman's book "The Pro Quarterback" which was published by Prentice-Hall in 1966. "You have to gamble in this league- or die," said Unitas to Olderman.