About an hour ago we replied to New Orleans-based writer Jeff Duncan, upon Karara scoring his fourth touchdown, that if he were in the building he should let the sideline know that Kamara was in a position to tie Ernie Nevers' 1929 record (set November 28, 1929) who was playing with the Chicago Cardinals at the time.
Of course, he was also in reach of six total touchdowns achieved by Dub Jones (November 25, 1951) and Gale Sayers (December 12, 1965) who scored their six in a mix of rushing, receiving, and returns.
Only Nevers scored all six on the ground.

We also noted the career marks Kamara was setting along the way. 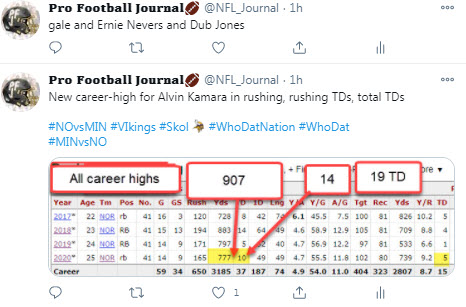 We even mentioned that if Kamara could get a couple of 2-point conversions he could tie the NFL record (held by Nevers) of 40 points in a game.

Then, with the Saints with a third and one (after Kamara had scored his fifth on the ground) watched Sean Payton pull Kamara, call a timeout, and put Taysom Hill in the game. Stunning.

Fortunately, the Saints got the ball, Drew Brees hit a long pass and Kamara got a second shot, which he converted—Thankfully.

Payton is still kind of a goat because there was a shot Kamara could have set the record outright with seven, but that, of course, is conjecture. So Payton kind of weaseled out of it with the long Brees pass and getting the ball in close range the two-minute warning.

So, Alvin, welcome to the Ernie, Dub, and Gale six-TD club. Just the four of you with six touchdowns in the game.