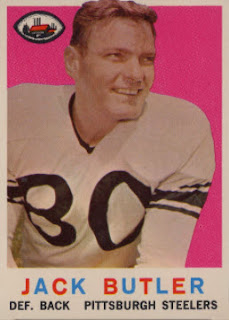 Like many others who have followed and watched many of the Monday Night Football games since 1970, we all have a handful of games that we truly believe are memorable. Last night was one of those for me. Reading that a record was tied going back 98 years sure got my interest, and with my respect for Jimmy Conzelman even more so.

Evansville no doubt was one of those teams that did not belong in the NFL as they are crushed by the Rock Island Independents 60-0. Conzelman is the first man to score five rushing touchdowns in a game; nine as a team on the ground.

Harbaugh's Ravens have positioned themselves for a run at a wildcard, and a quick check of the schedule these last three weeks sure gives us games that have meaning. Who would have thought that every Miami Dolphin game would be important after thirteen games? Can make a case that they do not make the playoffs.

Again, relish all of you, and who you think makes the AFC Magnificent Seven. "Nobody takes my guns, and tells me to run, nobody"...thank you, Britt.

George Preston Marshall had many of the Washington Redskin games filmed, and as such has allowed me to dig deep into who really did what for the 'Skins and their opponents. That statement takes me to our trip down historical lane for today. December 13th, 1953 in our Nation's Capitol and the suddenly resurgent Redskins have set their sights on a second-place finish in the eastern conference having won four of their last five.

The Steelers as usual are inconsistent, yet a physical team that has just enough talent to beat anyone; except of course Cleveland. Entering the game the Steelers right corner and one of my early football heroes Jack Butler has had a strong season with 5 interceptions for 61 yards, and a long of 28. The voting for the Pro Bowl has already concluded, and now for the third season in a row will not be selected.

Washington will align many times in a double tight end full-house backfield. Since Hugh "Bones" Taylor at 6' 4" 185 lbs. (maybe?) is the left end that means he is tight end left; which of course is silly since he never blocks anyone. LeBaron will flex Taylor out wider on third down and long.....gee, are the 'Skins gonna pass? Twice in the first half Jack Scarbath comes off the bench to throw deep to Taylor on streaks up the left sideline, and both times he is intercepted. Butler swipes the underthrown pass, and returns about 22 yards?

The second interception is Butler tipping the ball away from Taylor, grabbing the pigskin and weaving his way back upfield for about 36 yards? Second half and Taylor is now aligned at right end, with Charlie "Choo Choo" Justice as the main receiver to LeBaron's left. Butler pilfers his third pass, and again returns about 22 yards? Joseph T. LaBrum was responsible for the stats in the NFL, and the numerous errors over the years have been charted by yours truly.

Butler will intercept four in this game, and return them 86 yards....since LaBrum lists Jack's long of the season as 28 (he did this against the Giants)....not sure what his actual long is; probably 36 or 37? Even with Pittsburgh stealing five passes they trail in the fourth quarter 13-7 until the Little General passing from his own end zone floats a pass into the flat towards Justice on flare route. Jack is ready and knifes in front of the Choo Choo at the five-yard line, grabs the soft throw and scores the winning touchdown! As you can all imagine have watched this film numerous times.

Five years later Jack Butler has a new teammate in Bobby Layne, and for the first time since 1947 the Steelers are playing strong, winning football. The lowly Chicago Cardinals arrive on this cold Pittsburgh Saturday afternoon December 13th with the field ringed with snow.

The Steelers have beaten the Cardinals 12 of the last sixteen times they have played. Pittsburgh sets a team record with 683 yards in total offense. Layne is prolifically puncturing the porous Cardinal secondary. Jack McClairen and Tom Tracy both gain over 100 yards receiving, yet the key man for Layne today is rookie Jimmy Orr as he gains 205 receiving (rookie record). Pittsburgh wins 38 to 21 to finish at 7-4-1. Does Jack Butler contribute to the victory.....Hell yes, he does, as he intercepts twice from his right safety position to finish with 9 for the year (he tied for the league lead the year before with 10).