Do not have insight into all thirty-two teams in the NFL at this juncture. A few could make a cryptic comment, or praise what they have done so far—but we all can do that. Will begin today with my beloved Bears.

These days are darker than their jerseys and the McCaskey family will not be contacting me. So much has been written about the losing streak and Nagy's future. Termination is a very real possibility, and would relish having all of you respond with who you think should get the job?

For me want a Big 10 man of toughness who understands Chicago. How about either Fitzgerald or Harbaugh? Many times have listed the defensive passer rating for teams during a season, and no time like the present for the Bears. Over the course of the last six weeks opponent passers rating is 114.6—and no that is not a misprint. You can have all the offensive masterminds, but unless you play pass defense you don't win in the NFL.

Additionally, only 8 sacks recorded in the losing streak. OUCH! Shifting to a team that was the poster boys for losing, and now sure have the look of a playoff team...the Cleveland Browns. On Sunday in a game against a quality opponent, the Browns set a new record of scoring 38 points in a half...old record was 35.

Considering how many offensive juggernauts Cleveland has had...very impressive. The folks that know me well, realize have always had a very strong, and negative opinion of Gregg Williams, and his foolish decision on Sunday takes me to our historical time in the way back machine. December 6th, 1969 on a Saturday afternoon in the Astrodome the two teams that have now fought for the AFL eastern division title for three years meet. Namath gains only 52 yards passing on his six completions as the Jets run the ball effectively against a very strong Oiler defense.

Houston rookie Jerry Levias gains 329 all-purpose yards in the game...one of the few players ever in AFL history to surpass 300 in a game. The key though to the New York 34-10 victory comes from the defensive line as Philbin and Elliott both sack Oiler quarterbacks twice, and while noteworthy—pales in comparison to one of the most unheralded pass-rushing performances in history as right defensive end Verlon Biggs records FIVE sacks. Biggs also recovers a fumble, and Philbin chips in with an interception. Yes folks, once upon a time the Jets actually did play strong and sometimes dominating defense.

The linebackers and secondary also contribute with five interceptions. Losing game after game in the early part of the '70 season, and then playing resilient football in beating the contending Vikings and Rams brings us to December 6th, 1970 and their arch-rivals the Silver & Black Raiders come to Shea. Oakland must win to stay in the race to win the west and trail late in the game 13-7. The Jets pass defense has been air tight, and severely limited Raider receivers except for one short Warren Wells touchdown earlier in the game.

New York has committed 97 yards in penalties, and it is first and ten for the Raiders on their own thirty-yard line. Lamonica's deep pass is broken up, but wait a minute—a flag on the field...the Jets have now "earned" 134 yards in penalties on the 37-yard pass interference penalty on rookie Earlie Thomas. First and ten on the New York thirty-three, and the mad bomber pitches incomplete, and into the game comes Blanda, and he also throws incomplete. Eight seconds remain, and Lamonica back in the game lofts a deep pass towards the corner of the end zone. Warren Wells has run a post/corner to perfection yet the rookie right corner is right there and tips the ball.

The direction of the pigskin is changed as the ball goes end over end into the corner. Thomas is not alone, as free safety W.K. Hicks is there to help, but the trajectory of the ball is such he cannot make a play on the ball, and Wells makes a sure-handed catch for the score. The extra point is good. Final on December 6th, 1970 in a must-win situation for Oakland 14-13. Fifty years later to the day, Oakland wins in New York on the last play of the game. Go figure?

This season many former baseball and football players have left us, and have discussed them here. Though there was controversy more than once in Dick Allen's career; he was a player that I respected as both a man, and as a talent on the diamond. Am not alone in stating he hit the ball as hard as few others have in the history of the game. His rookie season of '64 in Philadelphia was a main reason for the Philies being in contention. Saw him hit a homer in the '67 all-star game in person. 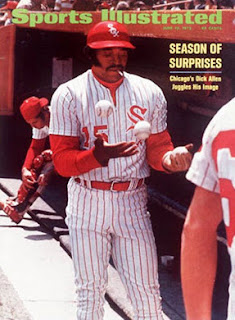 Saw him play against the Cubs, and Dodgers, yet what stays with me is his season in '72 under the guidance of Chuck Tanner. Allen hit a ball at Comiskey that literally sounded like a cannon going off..."CRRRAAAACK" and the ball disappeared deep, and I mean DEEP into cavernous Comiskey left-center bleachers. The greatest third baseman of all-time is Michael Jack Schmidt...there is no debate, and Mike steadfastly believes to this day how much Dick Allen's wisdom and philosophy helped him. RIP Mr. Allen—you were a joy to watch in the batter's box.